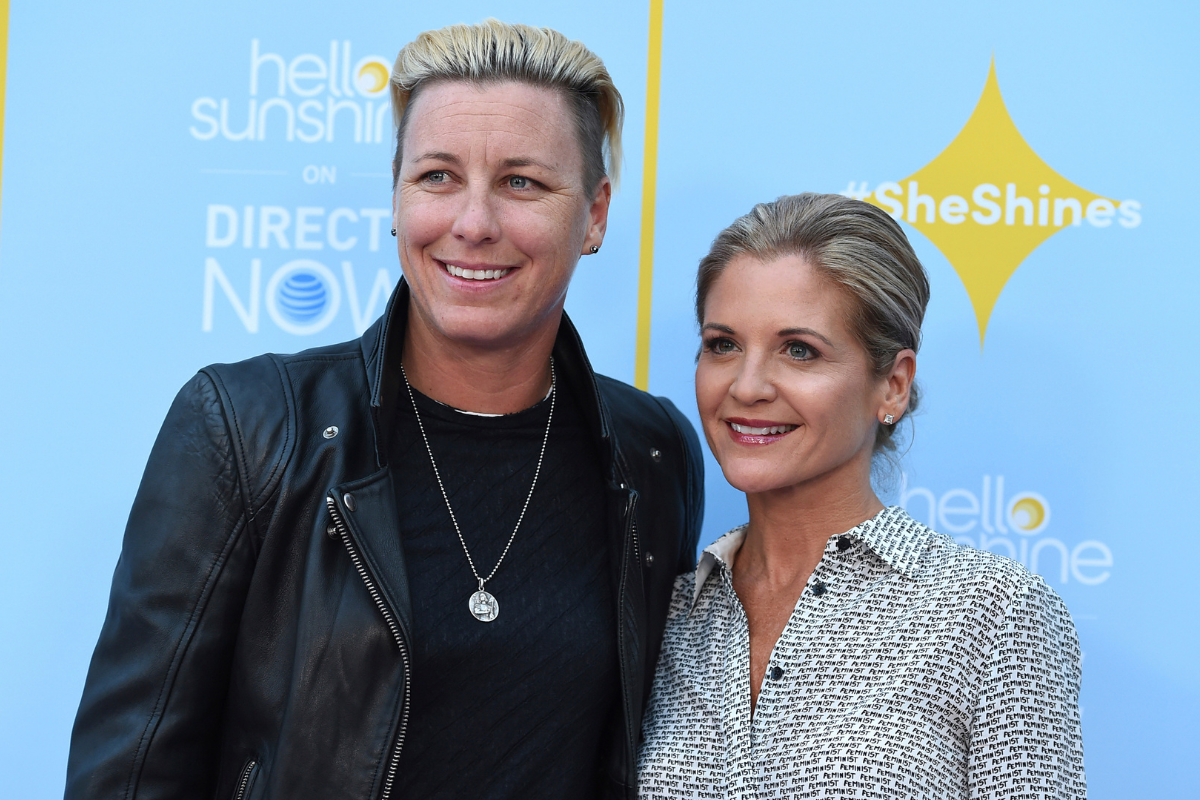 Abby Wambach proves someone can be so much more than the highest goal scorer of all time for their national team. Wambach has been in the spotlight for her striking prowess since the early 2000s.

Ever since she found her head, Wambach has not been afraid to use it.

The team has brought awareness to the sport, fought for women’s rights internationally, and advocated against gender pay disparities.

Oh, and they won scores of soccer games in that time, too, culminating in the 2015 World Cup victory over rival Japan. Wambach reached the peak of her career in 2015. The following year marked a rapid descent.

Plagued by substance abuse issues in 2016, Wambach was uncertain what to do next. She eventually got sober — just in the nick of time ?? and her recovery led her straight to the love of her life, a woman she has a family with today.

So where is the great American goal scorer now, and who is her mystery woman?

Abby Wambach had arguably the most notable soccer career in United States history. She participated in four World Cups held in the United States, China, Germany, and Canada.

In between World Cups, Wambach won two Olympic gold medals in Athens and London. But before she was a big star, Abby was just another college athlete with a funny photo.

Abby Wambach is a living legend, so we can forgive her for being a Florida Gator. She led “The Swamp” to their first soccer National Championship as a freshman in 1998. But even that was far from the first hint of how great Abby could be.

Before she was a Gator, Wambach was just a kid from Rochester, NY. She led every team she played on, including the basketball team at Our Lady of Mercy High School. She also led the local Rochester Spirit club team and her Olympic Development Program team.

Wambach had a knack for finding the back of the net from a young age. When she went pro in 2002, Wambach was ready to be the next face of American soccer.

Wambach joined the Ajax America Women’s team, a Dutch-sponsored squad playing in the Women’s Premier Soccer League (WPSL). Ajax is a giant club internationally, but not so much in the US.

Wambach rejoined the Freedom and the WPS. Two seasons later, the Freedom moved to Boca Raton and became magicJack.

Yes, magicJack. From the lowercase spelling to the name itself, it’s an annoying name and an advertisement for the team owner. magicJack, Dan Borislow (the owner), and Wambach joined WPS for one season before getting kicked out because Borislow kept butting heads with the league. With 2011 being a World Cup year, Wambach moved on from the venture.

The USWNT almost won it all in 2011 thanks to late-game Wambach heroics against the Brazilians. To the disappointment of patriots everywhere, Japan defeated them in the final. Also, in 2011, Wambach took a punch to her face.

Another layer to the legend of Wambach. Japan won the 2011 FIFA Women’s World Cup on a penalty shoot-out over the United States. Wambach returned home disappointed but inspired.

To prepare for the 2015 World Cup, Wambach joined the Western New York Flash (WNY Flash) in the Women’s Premier Soccer League Elite (WPSLE) league. The history of the WNY Flash mirrors the unstable history of all professional female soccer.

The team was a part of each league I’ve mentioned so far and was the current leader of pro-female soccer, the National Women’s Soccer League (NWSL). Wambach was there for it all and even met her future ex-wife as a teammate on the WNY Flash.

Wambach and the U.S. Women won the World Cup in 2015, defeating the Japanese team that had denied them four years earlier. After winning fútbol’s biggest prize, Wambach retired as an American hero, even if she didn’t always get along with her teammates.

Whatever tensions there may have been in the locker room, Wambach accomplished more than any other American soccer player before.

Yes, I do consider getting Simpsonized to be a Lifetime Achievement Award.

Wambach has won a staggering amount of legitimate awards, too. The polite way to do this is to put them on a list:

I will cut the list off there, but the truth is that I could keep going. Abby Wambach is one of the greatest soccer players of all time, male or female.

Wambach has always made scoring goals look easy. But off the pitch, her life has been more difficult.

Wambach dropped the mic on her playing career in 2015. She has appeared in headlines since, and not always for good reasons. First, she said some things about the Men’s National Team that pissed some people off.

The rivalry between the USWNT and USMNT is long, silly, and heavily one-sided. The women are angry the men get paid more to lose often while the women win everything and get paid next to nothing. The men can’t make the World Cup every year, and that’s embarrassing for everyone involved.

So the men dislike it when Abby criticizes them, even if she speaks the true-true. When Abby was arrested for DUI in 2016, the men’s team behaved like a group of repressed teenagers.

Boys will be boys, and this story is not about them. Abby was having a tough time in 2016 — she had been for a while.

Abby was caught under the influence of alcohol and pills, substances she struggled with for many years. To make matters worse, she was jailed in Portland, Oregon, which is no place for the ambitious. The arrest made her realize the err of her ways, and she soon moved to Florida.

It was more complicated than that. Wambach was in the midst of a divorce from Sarah Huffman, her soon-to-be ex-wife and ex-teammate from the Western New York Flash (WNY Flash; a team from the UWSL, WPS, WPSLE, and NWSL.)

Huffman and Wambach were only a year removed from their famed World Cup Kiss. Things can fall apart so quickly (ask Brazil).

For Wambach, her marriage, life, and legacy were on the rocks.

Wambach ended her first marriage, sobered up, and wrote an inspirational book. Her memoir Forward became a New York Times top seller in 2016.

With her newfound success as an author, it was time for Wambach to hit the road once again, this time to promote her book. It was on a promotional book tour stop where Abby Wambach met blogger Glennon Doyle Melton.

Their meeting was an unexpected twist of fate.

Who Is Glennon Doyle?

Author Glennon Doyle had a loyal following as a blogger long before she met Abby Wambach. Doyle cornered the Christian mommy blogger market with her blog Momastery, which had been gaining fans since one of her posts titled Don’t Carpe Diem went viral.

Doyle parlayed her blog into a book titled Love Warrior, which she promoted in 2016. Doyle also had a husband and children at the time, but they didn’t stop true love from scoring.

The two authors met while promoting their books at a librarian convention. Doyle claims love-struck harder and faster than a Wambach header. Doyle had never even kissed a girl (Katy Perry).

But after meeting Wambach, she found herself consumed with consummating a same-sex marriage. Doyle divorced her husband Craig Melton and re-married Wambach soon after.

Ex-husband Craig isn’t sour about it, though. Co-parenting with Wambach is a dream come true for the youth soccer coach. Doyle says Wambach is a necessary addition to her family, a bonus mom for children Chase, Tish, and Amma.

Wambach and Doyle live in Naples, Florida. Last year, Doyle published a new book titled Untamed. (The book is her third bestseller – Carry On, Warrior was her first in 2013). Wambach and Doyle have both expanded their resumes to include activists, influencers, and motivational speakers.

These expectation-shattering women are perfect for one another and are building a marriage their way together, in style. It looks like love wins again.