Michael Jordan has the Jumpman. Mia Hamm was the silhouette for Women's Professional Soccer (the NWSL's predecessor.) But Brandi Chastain is one of the most iconic sports images of all time.

Brandi Chastain is a retired American soccer player whose likeness is synonymous with a black bra. Hamm was the face of soccer in the 2000s, but Chastain was the body. Her 1999 World Cup-winning penalty over China inspired a nation to invest in soccer. With the U.S. Women's National Team still dominating today, the return on our investment is growing.

But back to the bra. Chastain still has it. Some guy once offered her over $1 million for it, which is both creepy and appropriate.

Chastain is known for THE sports bra but has done so much more in her career and life. She nearly didn't make the 1999 squad due to a knee injury and was cut from the 1995 World Cup team. How did Chastain arrive at her moment of glory, and where is she now? 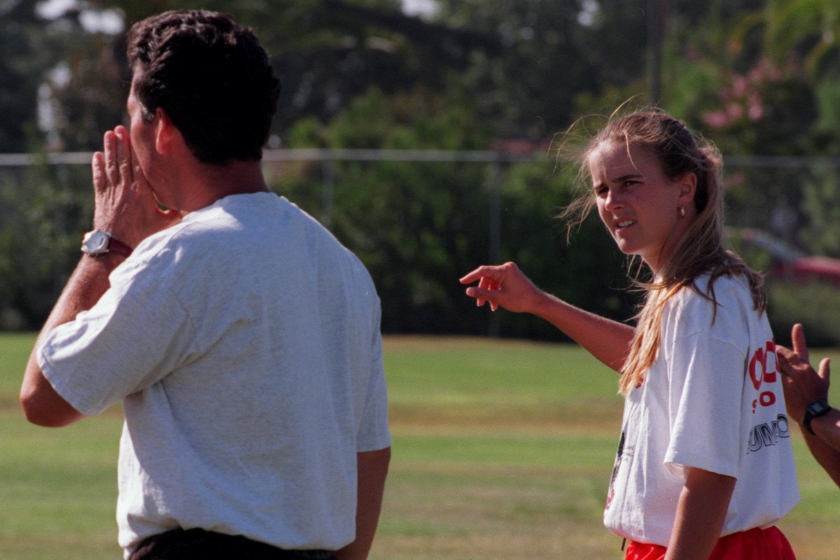 In the summer of 1968, San Jose couple Roger and Lark Chastain had a daughter. They named her Brandi Denise Chastain, and she grew up to be a bit of a tomboy. As a middle schooler, she played soccer for the Davis Junior High boys team because they had no girls team to offer. Archbishop Mitty High School had a high school girls team, so Chastain led them to three consecutive California state titles.

Chastain played college soccer for the nearby California Golden Bears in Berkley. Despite winning Soccer America Freshman of the Year, two ACL tears in a row nearly snuffed out her college career. Chastain found her way back to health and transferred to Santa Clara University.

She led the Lady Broncos to two consecutive NCAA Final Four appearances, the first in school history. She won the ISAA National Collegiate Player of the Year for her senior season efforts.

The Olympic gold medalist was eligible for a professional women's soccer league long before one existed, at least in the United States. Women's soccer had risen in popularity since the signing of Title IX in 1972, the same year Mia Hamm was born.

The 1991 Women's World Cup was the first World Cup for Women, and the 1996 Olympics the first Olympic gold medals for women's soccer. The Women's United Soccer Association (WUSA) united in 2000 because of how successful Chastain was with the national team, but more on that in a moment.

When Chastain graduated college, she had nowhere to play. With the skills she learned from playing with the national team, she hopped the Pacific to Japan to join Shiroko FC. Chastain was one of the L.League's few foreigners in 1993. She won the MVP anyway.

When WUSA came to be, Chastain joined her hometown San Jose CyberRays. The CyberRays won the WUSA Championship over the Atlanta Beat in 2001. WUSA dissolved in 2003, soon replaced by the likewise short-lived Women's Professional Soccer League. 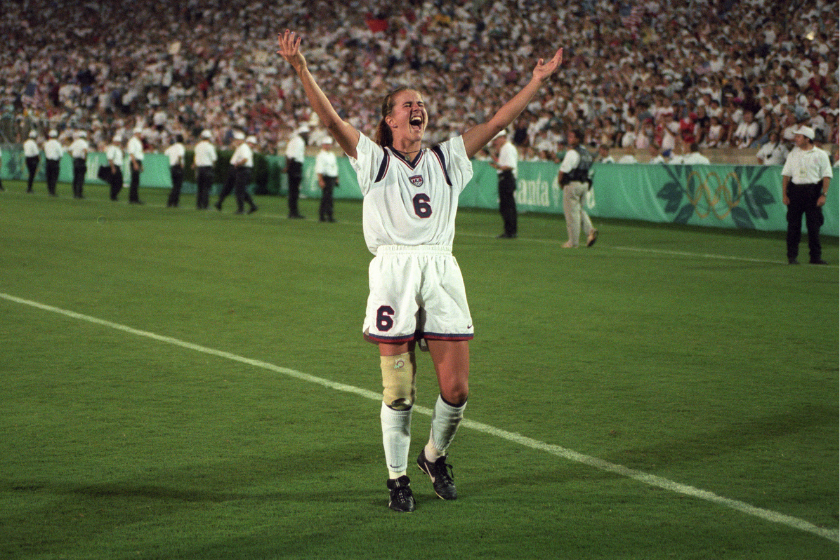 Despite scoring at forward in the NCAA, the U.S. Women's National Team (USWNT) played Chastain as a defender and midfielder. Her first time representing the Stars & Stripes came at the age of 18 against Japan.

Three years later, in the middle of a 12-0 thumping of rival Mexico, 21-year-old Chastain scored five goals. In a row. In the 1991 CONCACAF Women's Championship. The victory demonstrated that American women's soccer was headers and shoulders above the rest of the world. Later that year, the USWNT won the inaugural 1991 Women's World Cup over China.

Chastain was cut from the 1995 Sweden Women's World Cup roster, nearly ending her national team career. Coaches advised Chastain to defend more to make the team, so she did. The U.S. finished third in Sweden, and Chastain was re-instated as a defender soon after.

She helped Hamm and Scurry claim the 1996 Atlanta Olympics gold medal, despite suffering a third serious knee injury against Norway in the semifinals. Chastain rehabilitated her knee and was ready for the next World Cup.

Just in the nick of time, too. Had Chastain been unable to play in the 1999 Women's World Cup, American sports history would be forever dull.

In front of 90,000 patriots crammed into Pasadena's famed Rose Bowl, Brandi Chastain drilled the winning penalty kick in a shoot-out over China. (It may seem like the U.S. always beat China, but they didn't. Earlier in 1999, China defeated the States in a tournament championship. China won in PKs, one of which Brandi Chastain missed.) The shot heard around the world spurred the celebration seen around the world.

Chastain screamed, ripped her shirt off and fell to her knees before being mobbed by tears of joy. Brandi's teammates rushed her, and the stadium erupted while China hung their heads. Her winning goal (taken with her weaker left foot to confuse the goalkeeper) catapulted the U.S. Women to their second World Cup title. It shot Chastain into stardom.

Her powerful celebration is an image seared into the brain of any U.S. Soccer fan. The iconic photo of Chastain releasing a victory scream graced the covers of Sports Illustrated and Time. Chastain was an overnight sensation and rightfully so. She handled her newfound exposure with the same grace she'd reserved for the penalty spot.

Chastain threw the first pitch in a New York Yankees game, put her top on for a Wheaties Box and participated in Spike TV's "Pros vs. Joes." Mia Hamm may have had her own video game (the criminally underrated "Mia Hamm Soccer 64"). Still, Chastain was the best player in "Backyard Soccer." Seriously. Chastain was a cheat code.

She went on "Celebrity Jeopardy!" and won with only one dollar, a somewhat dubious honor. She competed against Seth Green and Barenaked Ladies songwriter Steven Page. Chastain has had sponsorships with Nike, Bud Lite and Gatorade. During her heyday in the early 2000s, she regularly appeared in their commercials. Several documentaries tell Chastain's story. They include "Dare to Dream: The Story of the U.S. Women's Soccer Team," FOX Sports' "Brandi Chastain Tribute" and ESPNFilms "Nine for IX."

Brandi Chastain's Life After the USWNT 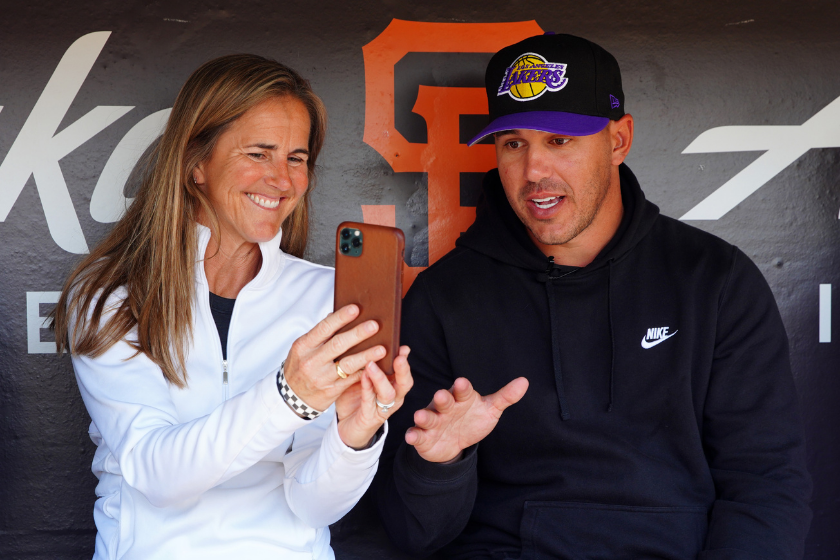 The two-time FIFA Women's World Cup Champion is doing what most retired famous athletes do. She's on the sidelines and in the boardroom for various soccer clubs, writing books about her life and realizing the dangers of CTE.

On the final two points, her book "It's Not About the Bra: Play Hard, Play Fair, and Put the Fun Back in Competitive Sports" is a must-read for young athletes everywhere. Chastain will donate her brain to CTE research when she passes. Chastain is still in athletic shape, so don't expect her header anytime soon.

Chastain has been a part-time broadcaster since her 2004 retirement. She provided commentary for the 2008 Beijing Olympics, 2011 FIFA World Cup, 2012 London Olympics, and various MLS matches on ABC, NBC and ESPN. Chastain also regularly appears on "Today" and "The Kelly Clarkson Show," usually to talk about soccer.

In 2018, the Bay Area citizens honored their own by inducting Chastain into the Bay Area Hall of Fame. The same citizens then turned around and dishonored Chastain, commissioning an ugly plaque.

Chastain has coached for several clubs since 2004, most notably for her alma mater, Santa Clara University. She's been an official assistant coach and, more recently, a volunteer assistant coach for the Broncos for 11 years.

She coached San Jose's Bellarmine College Prep girl's soccer team to a 2018 state title. Chastain is on the National Advisory Board for Positive Coaching Alliance, a non-profit promoting youth sport.

Chastain's invests in a San Francisco start-up app called CityCheers. The former star is on the Board of Directors for the California Storm, a second-tier Women's Premier Soccer League (misnomer) team in the Bay Area. Chastain is working on bringing a National Women's Soccer League (NWSL) team to her hometown, too.

California Governor Gavin Newsom honored Chastain in 2019 by inducting the World Cup Champion into the California Hall of Fame. The National Soccer Hall of Fame inducted the Bra three years earlier in 2016. 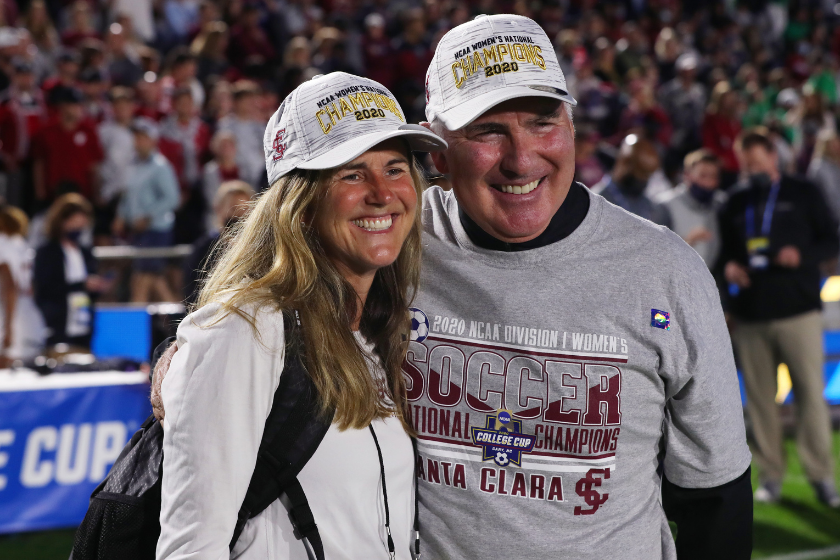 Chastain has given her all to her hometown by giving her all for her country. A proud American, Chastain and the 99ers made her fellow countrywomen believe again, giving everyone a team to stand behind. Chastain's legacy comes down to one moment. One picture, apparently worth 1,000 words. Here's No. 1,490, and I still haven't quite got it. Chastain is much more than just a photo. Even if that photo did change the world.