The 2022 FIFA World Cup in Qatar will mark the fifth World Cup for Cristiano Ronaldo. Now one of the biggest stars on the international stage, if not one of the most famous sports figures of his generation, Ronaldo has been nothing short of a master class both on and off the pitch. Ahead of the start of the 2022 World Cup, we look back on some of his most memorable World Cup moments. 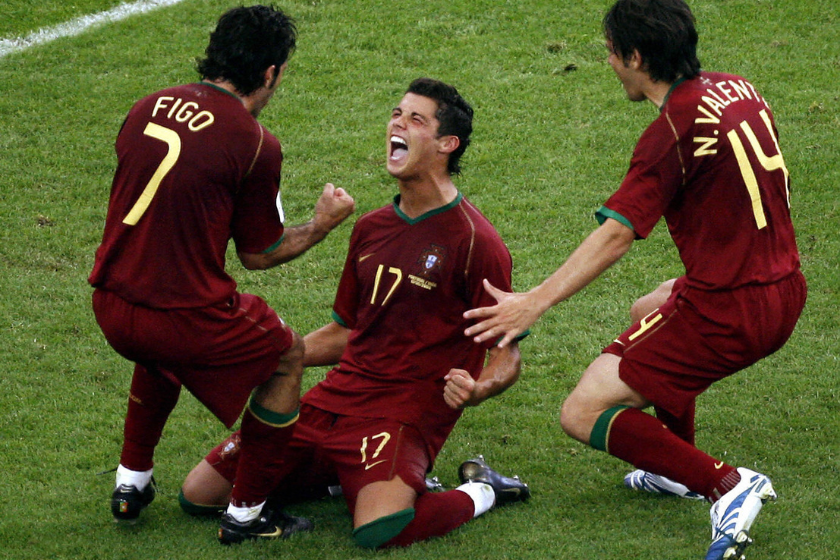 It all had to start somewhere. For Cristiano Ronaldo, that somewhere came in the final game of the group stage back in 2006 on a penalty shoot against Iran. Up 1-0 thanks to a Decco goal, Portugal was awarded a penalty shot in the 80th minute. The 21-year-old Ronaldo stepped up and calmly buried his shot to the left of Iranian keeper Ebrahim Mirzapour for the first World Cup Goal of his career. 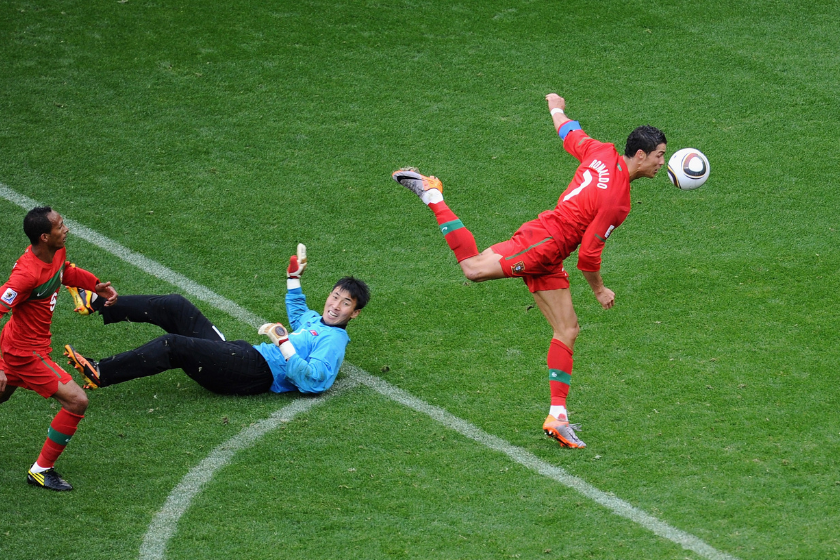 RELATED: Cristiano Ronaldo's Garage is Worth More Than $20 Million

With the vuvuzela drone echoing through Cape Town Stadium in South Africa in 2010, this Ronaldo moment would come with Portugal comfortably up 5-0 and cruising toward a victory against North Korea. Goalkeeper Ri Myong Guk came out to challenge a charging Ronaldo. Ronaldo won the challenge, but the ball flipped up onto the back of his neck, where he played it down in front of him and buried his chance. Portugal would have still won this match handily without it, but it made for a highlight reel goal for Ronaldo. 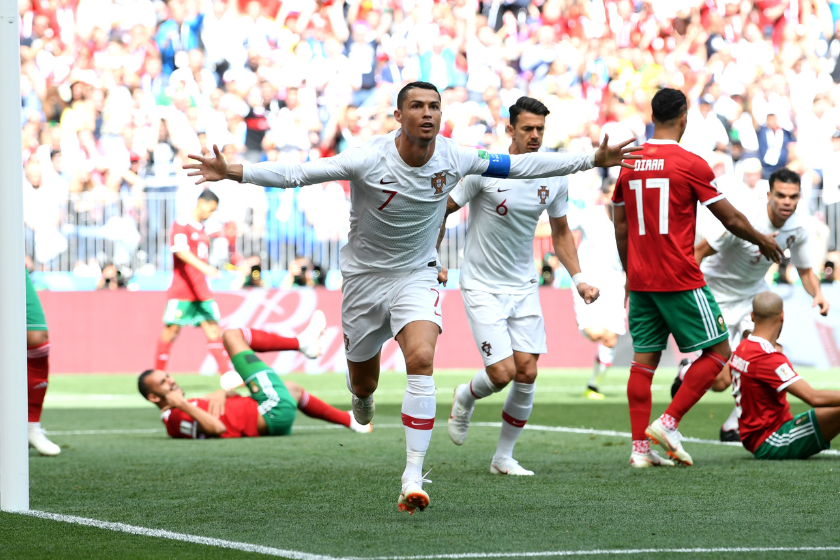 Ronald got things started early in Portugal's second Group B match vs. Morocco in 2018 by scoring a diving header in the fourth minute. Portugal was set up with a corner when Bernardo Silva played the ball short to Joao Moutinho who chipped it toward the goal to find Ronaldo cutting in and making the diving play on the ball. That goal was the lone goal of the game. Portugal won 1-0 and Ronaldo proved he doesn't just get things done with his feet--sometimes he uses his head. 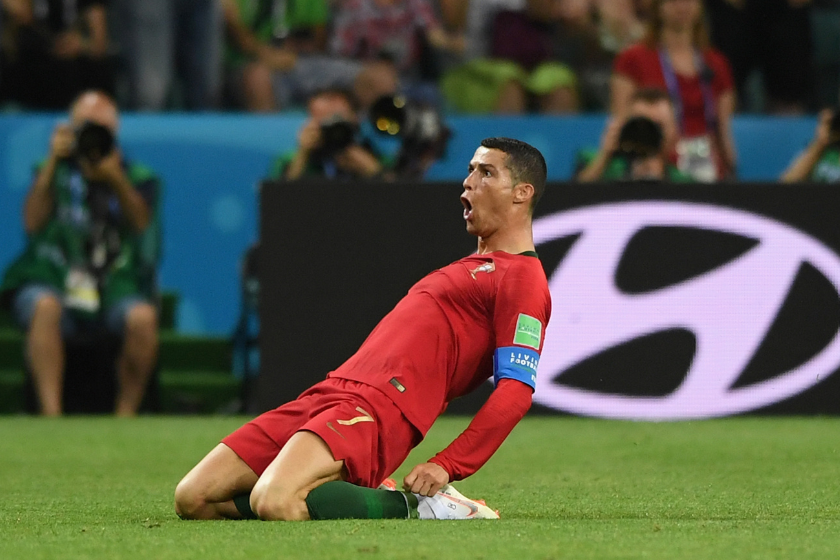 Portugal and Spain opened Group B play back in 2018 with one of the most spectacular World Cup games in recent memory. Spain would have come away with a sure victory if it weren't for the Portuguese hero. Spain collectively scored 3 goals in the game, which on any other day might have been enough to down Portugal. However, Cristiano Ronald did it all himself on the scoreboard for Portugal, netting 3 of his own. His only World Cup hat trick to this point ensured that despite giving up 3 goals to the Spanish side, Portugal came away with a share of the points in the all-important matchup.

Ronaldo would open and close the scoring, netting his first and the game's first goal in the fourth minute and closing out the game in the 86th minute with a penalty kick that would give him his third of the game. This goal stole victory from the Spaniards, resulting in a 3-3 finish and a masterpiece of World Cup play that people are still talking about 4 years later.

2014: The Zig Zag Haircut Shows Ronaldo Is also a Hero Off the Pitch 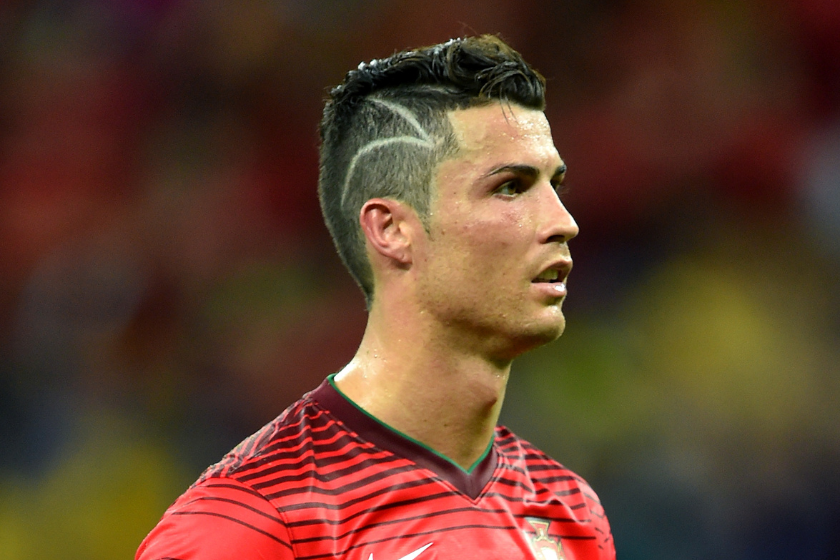 Ronaldo's best World Cup moment doesn't come from what he did on the field, but from what he did off of it. In 2014 just ahead of Portugal's final Group G game vs. the United States, Ronaldo was seen sporting an interesting 'do. He had shaved a zig-zag pattern onto one side of his head.

It turns out that it was a nod to a young boy from Spain. The child had a neurological disorder and required a costly operation. The family in Spain had reached out in hopes Ronaldo might donate a jersey or cleats that the family might auction off to help pay for the operation, which could run upwards of £55,000. Cristiano Ronaldo didn't just offer a piece of game-worn memorabilia to the family--he paid for the child's entire operation and pledged to cover any additional follow-up treatment that was needed. Ronaldo's act of kindness proved he is not just a hero on the pitch, but he is a real-life superhero as well.