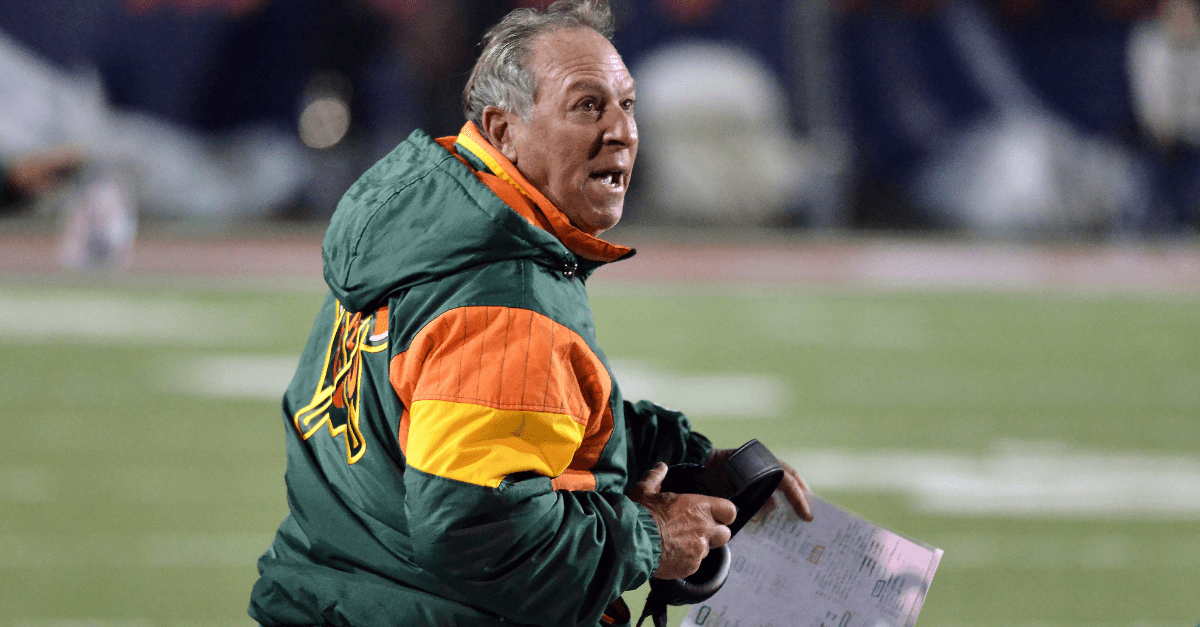 The battle for second-tier football supremacy is on. With the launch of the Alliance of American Football, the AAF has captured the attention of football fans longing for action during the spring. Next year, the XFL will return for the first time since its fateful 2001 season, and apparently the war for the NFL’s scraps is really starting to heat up.

On Tuesday, the AAF received a $250 million investment from Carolina Hurricanes owner Tom Dundon, who was named the league’s chairman as a result. The Alliance’s CEO Charlie Ebersol immediately discredited rumors that the league needed a financial bailout to stay afloat and be able to pay its players. One AAF coach even believes that the XFL intentionally spread those rumors in a smear campaign against its rival league.

In an on-camera interview with Mark McClune of Arizona’s Family, Arizona Hotshots head coach Rick Neuheisel suggested that the AAF is doing just fine, and their rival league is trying to negatively portray what the AAF is accomplishing so early in its existence.

“[The players] have to understand that this is a competitive environment we live in, right? There are other people out there that are trying to get a new league a year from now that are trying to create some negative publicity, but the good news is there’s an investor who just dropped $250 million who has been a part of professional sports… You have to imagine he did his due diligence.”

Was @TheAAF in financial trouble?

Aside from XFL creator and founder Vince McMahon, there are few people who knew the original XFL as well as Charlie Ebersol. The son of legendary NBC executive Dick Ebersol — who also was a co-founder of the XFL — directed the ESPN Films 30 for 30 documentary This Was The XFL, which chronicled the league’s debut with 54 million people watching through its eventual collapse after just one season. Ebersol believes one of the biggest mistakes the XFL made was rushing to start play.

“You had guys who were working at Bed Bath and Beyond, and thirty days later they’re in the XFL,” Ebersol said. He also told Fast Company that the league didn’t appeal to a family household and was too violent, basically acting as a football equivalent to WWE. Despite the XFL’s failure, both WWE and NBC turned a profit as a result, and innovations like the NFL Red Zone channel, the Skycam, and putting microphones on players during games all debuted in the XFL and were absorbed by the NFL.

The AAF hasn’t proven that level of impact just yet, but exciting games, footballs acting like computers, and perfectly chosen locations are all raising interest at a much faster rate than the XFL ever did.

Is it possible the XFL and Vince McMahon are trying to smear Ebersol who, essentially, stole his idea for a substitute professional football league to mirror the NFL? Is McMahon seeing the early success that the AAF beat him to as a serious threat? Is Rick Neuheisel paranoid and making this whole thing up?

Whatever the case, the AAF is $250 million richer today. All eight teams — Arizona, Atlanta, Birmingham, Memphis, Orlando, Salt Lake, San Antonio and San Diego — are competitive in their first two regular season games and don’t seem to be slowing down their progress on the field. The AAF is the only spring league currently active, but that’s not stopping the rivalry between the XFL and AAF heating up in a big way.

READ MORE: Colin Kaepernick Had a Job Offer, Then He Asked for $20 Million