Trent Richardson Was Flagged Because AAF Footballs are Basically Computers 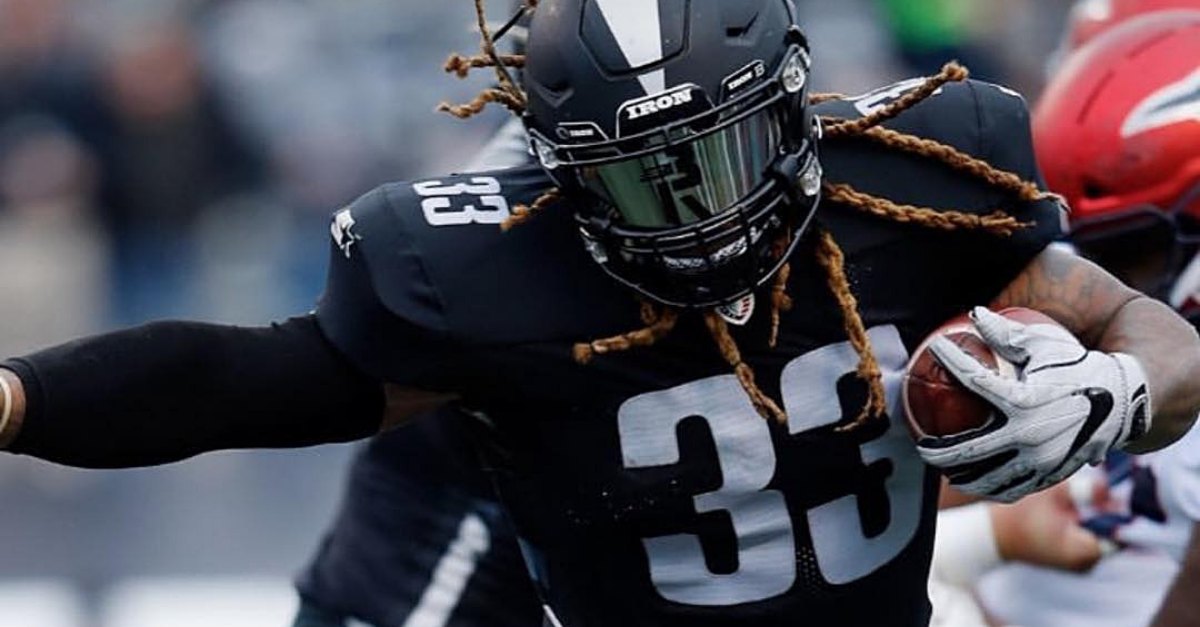 The Birmingham Iron may not be the Oakland Raiders just yet, but they made a statement in their inaugural game that professional football in Alabama has arrived. The Iron rolled a hapless Memphis Express team, 26-0, in the Alliance of American Football’s opening weekend. A stellar defense, the silent rise of quarterback Luis Perez, and two touchdowns from former Alabama star running back Trent Richardson sealed the deal.

After scoring the first touchdown in Iron history on a four-yard run early in the fourth quarter, the former No. 3 overall pick in the 2012 NFL Draft wound up and spiked the football, which then careened up into the stands. By National Football League rules, that’s ok. When it comes to the AAF, though, that’s a huge no-no, and Richardson drew an unsportsmanlike conduct flag for violating the league’s “no souvenirs” rule.

Richardson finished his AAF debut with 58 rushing yards on 23 carries and a pair of rushing touchdowns, as well as catching a two-point conversion. Following his first score ? as any former Cleveland Browns star fallen from grace would do ? he spiked the football to celebrate returning to pay-dirt for the first time since scoring for the Saskatchewan Roughriders in the CFL back on October 27, 2017.

Needless to say, Richardson was more than happy to finally be wearing the Black and White Birmingham Iron logo and playing professional football once again.

“I never got a chance to actually play for myself and play for my kids. I?ve always had a lot of stuff on my shoulders and a lot I was running for. Now I?m back to a place where it?s just fun. It?s fun, man. I can play for myself, my small family, my fiance and that?s it. That?s all I need.”

However, these special AAF footballs are designed with an RFID tracking chip that creates unique data to see how fast the football moves and the trajectory it travels in the air. That data is uploaded to The Alliance app (which you can download for yourself) in real time to bring fans closer to the game than ever before.

Basically, the Alliance footballs are way too expensive to just be tossed into the stands as souvenirs.

“Throwing the football in the stands is a 15 yard [unsportsmanlike conduct] foul… The balls will be equipped with tracking device chips ? that means no souvenirs.”

Upon further review, Richardson was not actually in violation of the rule. Former NFL official Mike Pereira, an officiating consultant for the AAF, stated that the ball bouncing into the stands should not have been penalized. If it were in fact on purpose, the Alliance can fine any player $6,684 the first time it happens, then $13,369 for the second offense.

He will not get a fine and won’t be penalized if he does it again. It is only a foul if a player deliberately throws it and hands it into stands. If a spiked ball bounces into the stands, no foul. It should not have been called.

The custom football and advanced technology this new football league is bringing to the game helps set the Alliance apart after only one weekend of action. Knowing what we do now, especially if you’re a player reaching the end zone for an AAF touchdown, it’s probably a good idea to just hand that expensive pigskin over to the official.

READ MORE: 4 Reasons Why Steve Spurrier’s AAF Debut Was Both Hilarious and Awesome