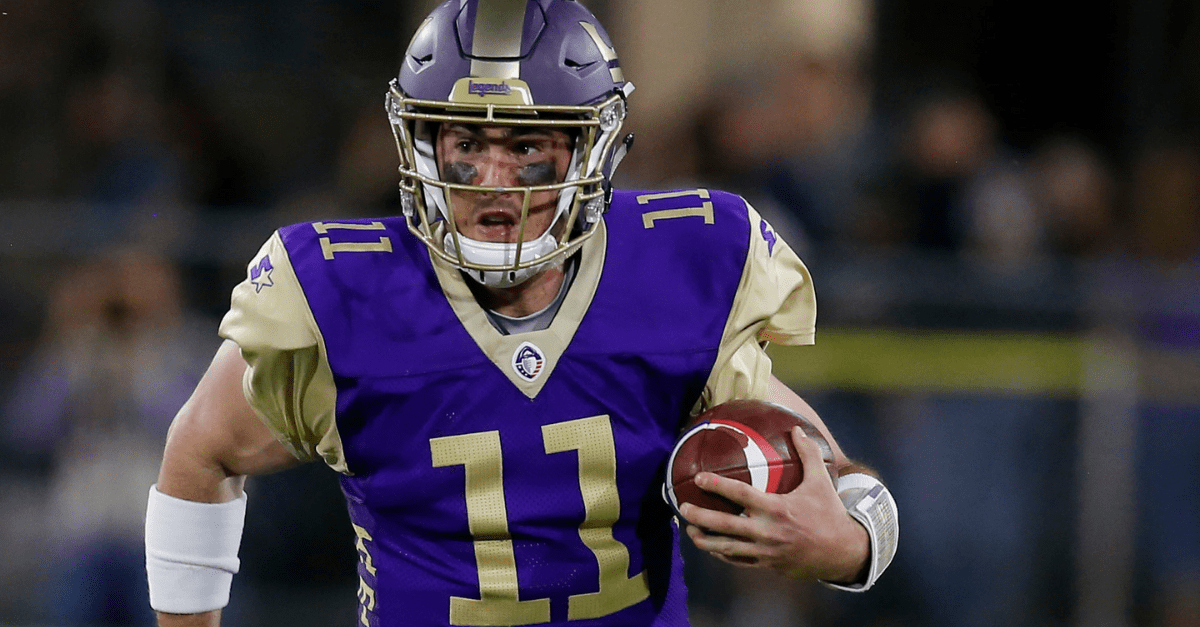 When the Atlanta Legends drafted former Georgia quarterback Aaron Murray with the second-overall pick in the 2019 AAF Quarterback Draft, newly-found fans were ecstatic that a local-legend was returning to The Peach State. However, the Legends and head coach Kevin Coyle stumbled mightily to start their inaugural season with Matt Simms at quarterback and lost their first three games by a total of 62 points. When they finally gave the ball to the SEC’s all-time leading passer, the AAF’s newest star was born.

Murray led Atlanta to a 14-11 win over the Arizona Hotshots, the second-highest scoring team in the league entering Week Four, and he did it in grand style. The former Georgia Bulldog threw for 254 yards, and he also led the Legends with 54 rushing yards to help secure the franchise’s first-ever win in the Alliance of American Football.

Over the first few weeks, the Legends fumbled their way to an 0-3 start and allowed 92 points in those three games. For perspective, no team has allowed that many points in FOUR games…

A change needed to happen. Atlanta fans were pleading their cases from the stands to finally play Murray, who many consider one of the greatest quarterbacks in SEC history. After incumbent starter Matt Simms left Sunday night’s game with an unspecified injury, Murray entered and was spectacular.

RELATED: Johnny Manziel’s CFL Career is Already Over. Is the AAF Next?

After taking the starting job to begin the season, Matt Simms, the 30-year-old quarterback who played college football for the Tennessee Volunteers, was leading the AAF with six interceptions and threw only two touchdowns. On Atlanta’s opening drive against Arizona, Simms was sacked and fumbled the football, which was recovered by the Hotshots. He never re-entered the game as team doctors examined his throwing hand.

Murray came on and was incredibly efficient, completing 20 of 33 passes for 254 yards, as well as rushing seven times for 54 yards. Running back Denard Robinson would score Atlanta’s only touchdown late in the second quarter as Atlanta’s offense recorded season-highs in total offense (454), time of possession (37:49) and points scored with 14.

When he was at the University of Georgia, Murray set Southeastern Conference records for career completions (921), passing yards (13,166) and touchdown passes (121) while leading the Dawgs during his four college football seasons. The fifth-round pick in the 2014 NFL Draft by the Kansas City Chiefs would spend time as a member of practice squads with the Arizona Cardinals, Philadelphia Eagles and Los Angeles Rams before ending up in the AAF.

It wasn’t the prettiest first win in team history, but Atlanta fans needed something positive to happen or else a full-blown riot was bound to take place.

If the Atlanta Legends don't play Aaron Murray today, we're giving away these shirts to our followers.

Must be a follower by first snap at 7:00 PM CST today to enter. Retweet for an extra entry. #AllHailATL #aaf #ATLvsARI #giveaway #hotshots #legends pic.twitter.com/llQahakY1n

Atlanta (1-3) will host Eastern Conference foe Memphis (1-3) on March 10 at 4 p.m. ET on CBS Sports Network. After a huge performance in his first legitimate AAF action, it’d be crazy not to see Aaron Murray under center for the Legends the rest of the way this season.