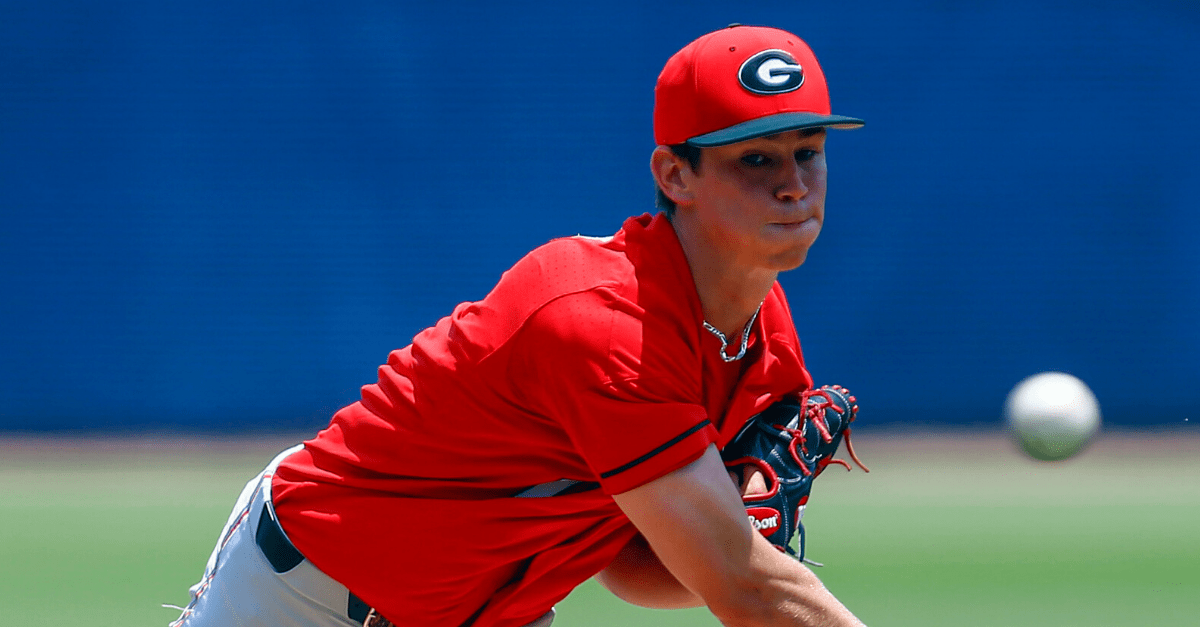 The University of Georgia is practically a factory for producing top-flight athletes. UGA’s football program is the one that gets all the attention, and deservedly so, but don’t forget about basketball and baseball.

Of course, Herschel Walker is the GBOAT (Greatest Bulldog Of All Time). Matthew Stafford, A.J. Green and Champ Bailey also starred on the gridiron in Athens. On the court, Dominique Wilkins averaged 21 points per game in the red and black before becoming the third overall pick in 1982, a nine-time All-Star and NBA Hall-of-Famer.

So, who does UGA baseball have to brag about?

You should already know that name. You will soon if you don’t. Hancock is a 6-foot-4 right-handed pitcher whose arsenal contains an upper-90s fastball and a wipeout slider. Oh, and there’s a good chance the Detroit Tigers take him with the first overall pick in the 2020 Major League Baseball Draft.

Not convinced by that description? See for yourself:

Who Is Emerson Hancock?

Hancock entered his junior season in 2020 as the consensus top pitching prospect in college baseball. Make your way to Foley Field on Friday nights, and you’d find a bevy of scouts equipped with radar guns and notepads.

Here are just a few of his ridiculous outings in 2019:

Hancock was a semifinalist for the Golden Spikes Award, and earned First-Team All-SEC honors and NCAA Second Team All-American honors from Baseball America, Collegiate Baseball and D1Baseball.com. USA Baseball invited him to play for its collegiate national summer team, but he declined to train in the offseason.

Despite Hancock’s abilities and successes so far, he seems like a down-to-earth kid:

Hancock accomplishments came after a poor freshman season in which he owned a 5.10 ERA in 77 2/3 innings. If the 213-pound ace took that big of a step forward, who knows how high the ceiling could be?

Born in Cairo, Georgia, the 20-year-old flamethrower was a star-in-the-making at Cairo High School. As a senior, he was 11-1 with a 0.75 ERA and 125 strikeouts over 65 innings. The dominant prep pitcher would’ve been drafted higher than the 38th round by the Arizona Diamondbacks in the 2017 MLB Draft if he didn’t plan on heading to Athens.

When he’s on, Hancock’s pitching performances are magical. Scouts salivate at his movement, velocity and large frame. But don’t just listen to me. Here’s what the experts are saying about him.

Hancock shares a lot in common with Casey Mize, whom Detroit took with the top pick in 2018. They’re both Southeastern Conference right-handers with similar builds who pound the strike zone with a deep repertoire and missed some time during their sophomore seasons. His best offering is a fastball that sits at 94-97 mph and peaks at 99 with riding life, and all three of his secondary pitches grade as at least plus at their best.

His go-to breaking ball is a mid-80s slider with which he manipulates the break exceptionally well, and Hancock also has a hard curveball that he relied on more in high school. He hasn’t had to use his changeup much but he fades and locates it well, earning some plus-plus grades at times. A quality athlete with good body control, he commands his entire arsenal and should be a frontline starter if he stays healthy.

With another big season coaches, scouts and fans alike may be talking about Emerson Hancock similar to how Casey Mize was discussed during the 2018 season. At a still projectable 6-foot-4, 213-pounds, Hancock is a perfectly proportioned pitcher physically with long limbs and broad shoulders. He attacks hitters with his fastball early and often, flirting with triple digits early in games while maintaining mid-90s velocities deep into ballgames. The pitch also has some arm-side run to it with a loose and fast arm. Hancock has a well-rounded three-pitch mix that includes a sharp, bat-missing slider and a fading changeup that he pulls the string on well, particularly against lefthanded hitters. As his 97-to-18 strikeout-to-walk ratio spanning 90 1/3 innings attests to, he has very good control in addition to light?s out stuff, working all quadrants of the strike zone while changing eye levels, making him a legitimate staff ace both now and for the next level. With that overall profile Hancock is on the short list of players projected to go first overall in the 2020 MLB Draft.

Emerson Hancock and the 2020 MLB Draft

Emerson is in contention with Arizona State slugger Spencer Torkelson to go first overall in the draft. MLB.com ranks the UGA pitcher No. 4 on its list of 2020 MLB Draft prospects.

Why is this important? For one Hancock will get absolutely paid. Secondly, this would be monumental for Georgia Bulldogs baseball, a program that’s never had a first overall pick. The highest-drafted Bulldog was Jeff Pyburn, who went fifth overall in 1980.

Georgia football has featured a handful of top NFL picks, including Matthew Stafford (2009), Harry Babcock (1953), Charley Trippi (1945) and Frankie Sinkwich (1943). The MLB has never called a Bulldog’s name to begin a draft, however.

Even with an expected stellar 2020 season, Hancock still wouldn’t be considered the best UGA baseball player of all time. That distinction belongs to either Gordon Beckham, the 2008 SEC Player of the Year who smacked 53 career home runs, or Derek Lilliquist, who owns a program-record 31 wins and 387 strikeouts on top of hitting .318 with 35 home runs in a Bulldog uniform.

Alex Wood, a 2017 All-Star pitcher for the Los Angeles Dodgers, is currently the best big leaguer who attended UGA. Make no mistake, though, Hancock has a chance to challenge Wood in the MLB. And it could be very soon.

UPDATE (June 4, 2020): Despite the coronavirus pandemic and spread of COVID-19 canceling the 2020 college baseball season, Hancock flashed his dominance in four starts for Georgia, a team that went 14-4 and was ranked No. 2 in the final rankings before the shutdown.

Hancock threw 24 innings, going 2-0 and posting a 2.75 ERA. He logged a career-high 12 strikeouts in 7.1 scoreless innings against UMass, which added to his 34 K’s on the season.

He wasn’t able to dominate very long, but Hancock was named the 2020 Vince Dooley Athlete of the Year by The Georgia Way and Student-Athlete Advisory Committee as the top student-athlete at the University of Georgia.

The winner of the Vince Dooley Athlete of the Year Award is Emerson Hancock of the Baseball team. #DawgsChoiceAwards @emerson_hancock @baseballuga pic.twitter.com/jmkNnxO3xr

As expected, he won’t be waiting long once the 2020 MLB Draft gets underway June 3.