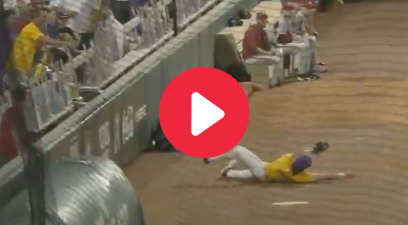 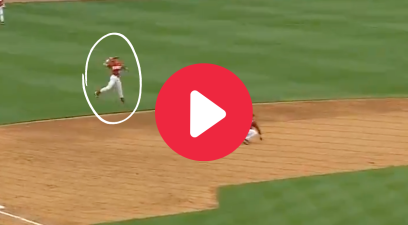 College baseball is full of absurd records that will likely never be touched. For example, before Robin Ventura fought Nolan Ryan, he orchestrated a 58-game hitting streak in 1987 for Oklahoma State that won’t be surpassed anytime soon. How about when the stars aligned for Louisville’s Jim LaFountain, who in 1976 slugged an incredible three grand slams (and another home run) in one game?

One historic NCAA record that won’t be broken is the one set by Florida State‘s Marshall McDougall in 1999.

McDougall might need some introduction. The Jacksonville, Florida native played high school ball in Gainesville and then two seasons at nearby Santa Fe Community College, where he turned down draft opportunities from the New York Yankees and Chicago White Sox.

The second baseman then played two seasons for the Florida State University Seminoles under head coach Mike Martin, the winningest coach in NCAA baseball history. As a junior, he put together a First-Team All-American season in 1999: .419 batting average, 28 home runs and 106 RBIs.

The right-handed slugger won the ACC triple crown as well as ACC Player of the Year and should’ve won the Golden Spikes Award and Dick Howser Trophy. Behind McDougall’s bat, FSU finished runner-up to the Miami Hurricanes in the College World Series. The Florida State masher was named the Most Outstanding Player in Omaha.

McDougall’s 1999 season should rank right up there with other former Florida State baseball players like Buster Posey’s magical 2008 season and J.D. Drew’s record-setting 1997 season. That’s how good it was.

18 years ago today, Florida State's Marshall McDougall had a game for the ages: https://t.co/zACfrLvvf9 pic.twitter.com/nP4HTxXc4z

One can’t mention Marshall McDougall without talking about what he accomplished on May 9, 1999, in FSU’s 26-2 win over the Maryland Terrapins in College Park, Maryland.

After ripping a single in the first inning, McDougall hit six home runs in his next six at-bats that day. He finished the game 7-for-7 with six homers, 16 RBIs and 25 total bases, all of which are NCAA single-game records.

McDougall broke the NCAA single-game home run mark set by Henry Rochelle, who in 1985 hit five against Radford while playing for Campbell. Rochelle finished 8-for-8 with 10 RBIs in the 38-0 win.

“It was a great feeling because everyone was rooting for me,” McDougall said more than 20 years ago. “Seeing my teammates react and the fans react, it was great.

“They were laughing and jumping around. They couldn’t believe it.”

Here’s how McDougall’s day looked inning by inning. The home run hitter’s dinger barrage began with a solo homer in the second inning and concluded with a three-run shot in the ninth.

The box score is just as crazy as you would expect. Three other FSU players went yard that day. Maryland starting pitcher Jamie Hammond surrendered 10 earned runs. Relievers Ryan Fleetwood and Aaron McFarling combined to give up 12.

How Marshall McDougall Did It

Look, I don’t know if the wind was just blowing out or if McDougall found a jet stream each time he lifted the ball into the air.

What I do know is that Shipley Field’s dimensions looked very small for a college baseball field, which made it easy for McDougall to hit for the home run cycle and then some. That the centerfield wall sat 355 feet from home plate is a joke.

It looks like Bob “Turtle” Smith Stadium has been updated since, as the school website says it’s 385 feet to center, 320 down the left field line and 325 to the right field line.

Also, why did Maryland pitchers keep pitching to this guy? Even with men on base, how many long balls does he have to launch before you just intentionally walk him?

McDougall didn’t have much to say after the game. He enjoyed every moment of dropping his teammates jaws each time he circled the bases. He also revealed his secret, via Seminoles.com:

“I just go up there and try to make good contact.”

Head coach Mike Martin, who was in the dugout during the historic game, also broke down the six home runs in the video below. He claims the wind was actually blowing in. Huh?

McDougall wound up being drafted by the Oakland Athletics in the ninth round of the 2000 Major League Baseball Draft. He played in the minor leagues for the A’s and Cleveland Indians before the Texas Rangers took him in the 2002 Rule 5 Draft.

The former FSU star made his MLB debut with the Rangers on June 7, 2005, but was released a little more than a year later. After failed stints in the big leagues with the Los Angeles Dodgers and San Diego Padres organizations, he played in the Chinese Professional Baseball League and in the Mexican Pacific League.

He now serves as the head baseball coach at Wiregrass Ranch High School in Wesley Chapel, Florida, according to his LinkedIn.

McDougall was inducted into the FSU Hall of Fame in 2011 and is forever enshrined in Seminoles lore.