The UConn Huskies have a legacy of winning in NCAA Women's Basketball. The collegiate powerhouse have 11 national titles -- the most in NCAA Women's Division I Basketball -- and have an impressive four consecutive national championship wins.

The elite college basketball powerhouse has a reputation for molding some of the greatest WNBA stars, like Sue Bird, Diana Taurasi and Breanna Stewart. In recent seasons, junior guard Paige Bueckers has risen to Husky fame, becoming the first freshman in women's college basketball history to take home both AP and Naismith Player of the Year awards. Sadly, injuries have plagued Bueckers. After missing a large portion of her sophomore season, she will be out for the 2022-23 season due to an offseason torn ACL injury.

Any other NCAA team might be panicking after such a staggering loss, but not Connecticut. The Huskies will be putting all their faith in their top returning scorer, sophomore phenom Azzi Fudd, as they look to avenge their 2022 National Championship loss to South Carolina. At UConn, getting an automatic bid to the NCAA Tournament is not enough. An Elite Eight or Final Four appearance is not enough. This isn't DePaul, Arkansas, Villanova or Georgetown. UConn Plays for rings, people.

So who is Azzi Fudd, and can she meet the moment and get Storrs a national championship?

Fudd's Always Been a Top Prospect 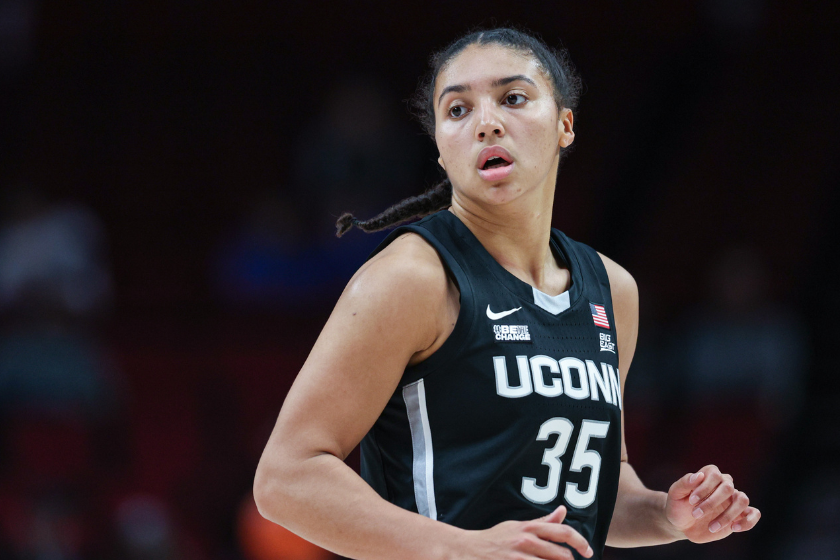 Azzi Fudd is used to the pressure. Yes, the UConn sophomore may have been sidelined with a foot injury for 11 games last season, but her mental and physical toughness never wavered. The rising Husky star shined brightly playing ball in Washington D.C. at St. John's College High School and was the No. 1 overall ranked athlete in the 2021 class. Scouts, coaches, players and fans were all expecting her to excel in the NCAA.

Fudd was considered the nation's top prospect for the 2021 class as early as 2016. Scouts saw her as an "impact guard who elevates and finishes plays" and the glowing recognition just kept coming. The top prospect turned Husky consistently delivered on the court, earning the 2019 USA Today National Player Of The Year and the Gatorade National Player Of The Year. Fudd's revered consistency is something UConn will have to rely on without Paige Bueckers, if they are to march back to the national championship. 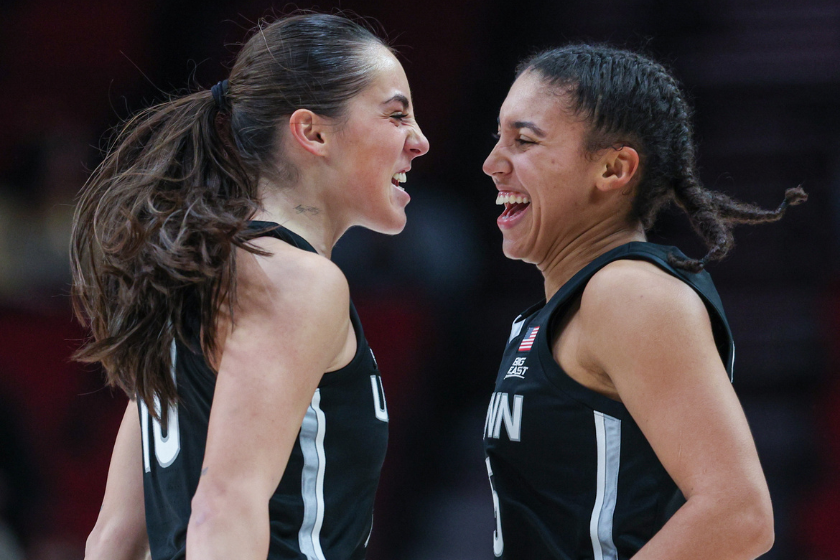 Some players inspire their teammates with rousing pep talks and constant encouraging chatter. Fudd is not that type of player. Azzi Fudd employs her work ethic and abilities on the court to lead her team -- she's the epitome of leading by example.

"Azzi is never going to call a huddle and say, 'Alright guys, here's what we're gonna do.' That's just not gonna happen," UConn coach Geno Auriemma said during the Big East Media Day in New York. "But with two guys in her face and she's got a 28-footer, it's going in. So, I like that kind of leader."

Huskies fans may be doubting Fudd's ability to bring the ball down the court and facilitate the action on the hardwood. So, they will probably be surprised by the efficiency with which the star sophomore can control the tone like a point guard. It's going to be a role UConn fans haven't seen Fudd in before, but one she's more than capable of stepping into, even if the last time she ran point was during her high school days playing for Team USA.

"Azzi is a much better ball handler than people have seen because she usually catches and shoots it, but in all the things that we've done, she's probably as good as anybody we have at getting to the basket, attacking the defense and getting the ball to where we need to get it, getting the shots she wants to get," Coach Auriemma said.

How is Fudd handling the anticipatory pressure of leading the UConn women -- like a pro. "Coach is just telling me, 'You're ready. You know what this season is gonna be. You know what you need to do for us," Fudd said. "And just letting him know that I am ready. I'm a much different player than what I was last year and I'm ready for a bigger role. I'm ready to bring more to the team, bring more to the table."

Fudd is committed to not only a bigger role within the UConn Women's Basketball world, but the wide world as well. The shooting star's skill on the court and passion off the court is opening doors collegiate athletes didn't have access to. In December, Fudd became the first college player to sign a NIL deal with an NBA player when she signed with Steph Curry's SC30 Inc. The two have been circling each other since Fudd first attended Curry's SC30 Select Camp at 15. Steph Curry's been supporting Azzi Fudd ever since. That's not bad company for the young baller to keep.

Azzi's desire to lead by action surely drew her to Steph Curry's organization. SC30's website states the message clearly, "We know that setting the example is far more effective than talking about it. This is why our relentless commitment to human equity inspires everything we do, with the hope that our work, in turn, inspires others to dream more. Through Brand, Media, Experiences, and Philanthropy, our aim is to create meaningful, immediate and long-lasting change in the world -- starting with ourselves and our partners."

The UConn women's basketball rising star is following a calling of her own, to use this newfound spotlight for spreading good. "I really want to try and use my platform to spread awareness," Fudd told the Athletic. "And I think I'm just starting to find my voice and find my passions and what I want to use my voice about and for. And for the future I plan to continue to use my platform, use my voice to speak out on things but there's nothing planned so far. But once I find those things and those opportunities, campaigns, programs roll around, I for sure will."

In the meantime, Fudd has a big fan in the NBA's all-time greatest shooter. Steph Curry has made a name for himself as a ferocious supporter of female athletes. After dropping a casual 40 against the Cavaliers, Steph proudly donned an Azzi Fudd jersey at the post-game presser. Fudd was coming off a monumental game, scoring an electric 26 points in UConn's opening win.

"Wanted to shout her out," Curry said of Fudd, after a stellar performance and her 20th birthday. "Basketball is basketball and continuing to do our part to shine a light and celebrate those women who are doing amazing things on the court."

I think it's fair to say that as more basketball fans are introduced to the Huskies sophomore, more fans will grow to love and support Fudd as loudly as the Warriors' four-time champion does.

The Undeniable Rise Of Azzi Fudd 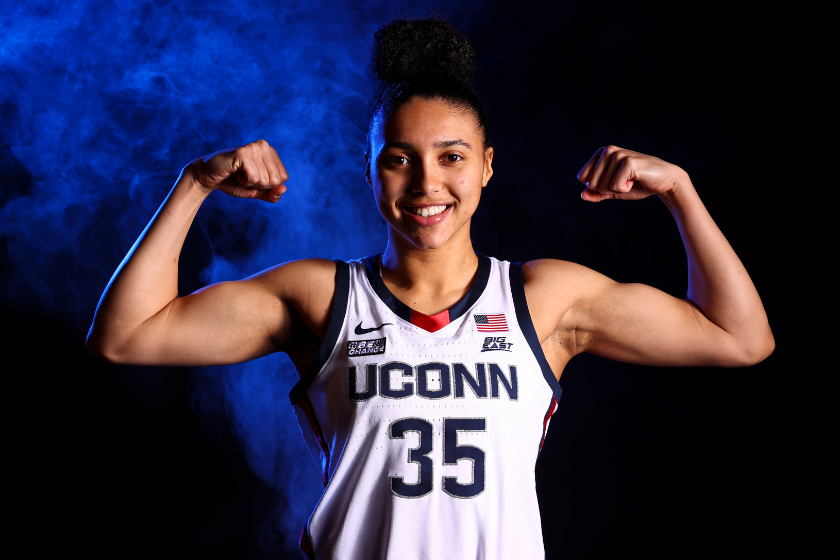 RELATED: For Cameron Brink, Stanford Basketball Stardom is in Her Blood

The time for speculating about Fudd's ability to lead the Huskies is rapidly vanishing. It may be early in the season, but Azzi is off to a ferocious start. The sophomore leader has a combined 58 points after her first two season showings -- the most points by a Husky through the first two games of the season, ever.

Fudd, firing on all cylinders, put together a masterful performance, scoring a career-high 32 points -- with 22 second-half points and an inspired 17 fourth-quarter points against the Texas Longhorns. Fudd's 32 points are also tied for the most a UConn women's basketball player has ever scored against a top-five opponent. Diana Taurasi also dropped 32 points back in 2022 against No. 2 Tennessee. Twenty years later, Fudd finds herself in the ranks of one of the greatest women's basketball players of all time.

Connecticut's Coach Geno Auriemma said, "Obviously, she didn't do it single-handedly by herself. But that was an All-American performance today. That's, like, player-of-the-year performance there tonight."

She keeps topping herself, beating her own career-best, and helping her teammates secure wins. It feels like we are in the throes of watching a future WNBA legend in the making. And it's not just her shooting that is impressive this season. Fudd is starting the season with 19 assists, 10 steals and a stellar 92% at the free-throw line.

Azzi Fudd is truly a collegiate basketball powerhouse who celebrates her teammates and is quick to share the success. Fudd told the press after her career-high achievement, "We're all capable of doing so much. It's going to make it really fun playing together this season." The young UConn leader is right about that. And it will be really joyous for the fans to watch her and the Huskies explode this season -- especially as Fudd continues to rise.