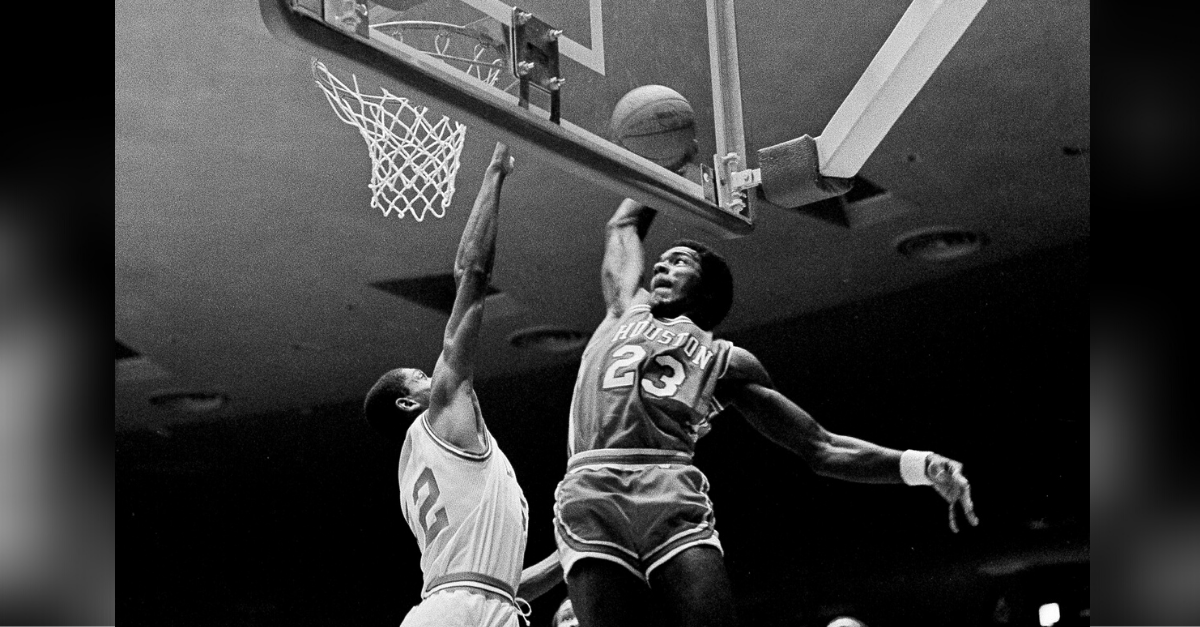 Guy Lewis knew only one speed: go. The University of Houston Cougars head coach built his teams in the early 1980s based on this principle. They flew and ran and flashed their personalities, but most importantly, they slammed. Lewis’ Houston teams were the antithesis of John Wooden’s regimented UCLA teams that dominated college basketball in the the 60s and 70s.

Lewis had no boundaries on his recruiting. He sought players on the playgrounds, at local Houston high schools, in Africa, and landed some of the most talented players in the world in the process. Clyde Drexler, Hakeem Olajuwon, Benny Anders, Reid Gettys, Michael Young, Larry Micheaux, Rob Williams, and co-captains Eric Davis, Lynden Rose. All proud brothers of Phi Slama Jama.

The team hit the ground running in the 1981-82 season. Led by the Williams, Drexler, and Olajuwon, the Cougars advanced all the way to the NCAA Final Four in New Orleans. They squared off against the North Carolina Tar Heels charged by Sam Perkins, James Worthy, and Michael Jordan. The more experienced Tar Heels defeated the young Cougars 68-63. The loss hurt, but they proved their style could translate to wins.

The next season, Houston returned with more experience and a desire to avenge their Final Four loss. They started the year ranked fourteenth in the country and went 7-2 in their first nine games. The tenth game against Pacific was a light bulb moment for Houston Post sportswriter Thomas Bonk.

The Cougars had just blown out Pacific by 54 points at home and Bonk needed a storyline. He noticed the team had 10 dunks in the game. The Cougars were a brotherhood of dunks and excitement. So Bonk coined Phi Slama Jama, the dunking fraternity.

Following the label, the team boasted the term in script lettering on their warmups.

Houston breezed through the rest of the season, climbing all the way to No. 1 in the rankings and earning a one-seed in the NCAA Tournament. Determined to never endure another crushing defeat again, the team surged through the tournament. The biggest test came in the national semifinal against Louisville, nicknamed the “Doctors of Dunk.” Houston out-dunked the Cardinals on the way to a 94-81 win. They had a date against North Carolina State for the national championship.

NC State brought the heat and forced the Cougars to abandon their run-and-gun identity. Jim Valvano’s squad wanted to make Houston beat them with free throws, their biggest Achilles’ heel. It worked, and the underdog Wolfpack had the ball with 44 seconds left and the game tied at 52.

UH setup in a half court zone defense. NC State passed the ball around. Anders narrowly missed a steal near half court and Wolfpack senior Dereck Whittenburg had to heave a prayer as the clock wound down. The ball fell short, but teammate Lorenzo Charles grabbed and dunked the ball in one motion, winning the game for NC State.

A majority of the team returned for the 1983-84 season, but they didn’t have the same mojo and chemistry. Nonetheless, Olajuwon — the best player in the country — carried the Cougars to the national championship game for the second year in a row to face Patrick Ewing and Georgetown. The Hoyas outplayed them and won 84-75. Olajuwon entered the 1984 draft and was selected first overall by the Houston Rockets. The Phi Slama Jama era was over.

Houston never won a National Championship in those three seasons, but they were some of the most exciting basketball teams in the sport’s history. They were can’t-miss TV that created the above the rim style of play. Their legacy hangs in the rafters at the Fertitta Center, Houston’s home arena. The floor is named the Guy V. Lewis court, and the legendary coach was inducted into the Basketball Hall of Fame in 2013. Jim Nantz — a University of Houston student at the time — started his career hosting Lewis’ weekly highlights show. Chip Rives directed an ESPN 30 for 30 about the flying Cougars.

The Phi Slama Jama teams paved the way for the new age of college basketball.