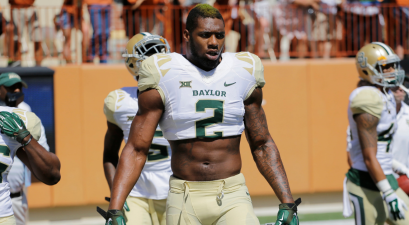 The Baylor University men’s basketball program was fresh off a tragedy.

Forward Patrick Dennehy had been murdered by teammate Carlton Dotson. The investigation revealed several improper benefits and recruiting violations. Head coach Dave Bliss resigned, and the program was handed some of the harshest sanctions in the history of the sport that included postseason bans and scholarship reductions.

New head coach Scott Drew had a mountain in front of him.

Drew received his first taste as a Division I coach as a student manager for the Butler basketball team. He spent most of his young coaching career as an assistant coach under his father Homer Drew at Valparaiso University. He took over the Crusaders for one season before heading to Waco, Texas.

The college basketball coach steadily built one of the best programs in the country. In his 18 seasons, the Bears have nine NCAA Tournament appearances, an NIT Championship, the 2021 Big 12 regular season title, players who’ve been selected in the first round of the NBA Draft, and recruiting interest from some of the best high school basketball players in the country.

Drew’s Baylor Bears have reached the Sweet 16 and Elite Eight. Now, a coveted Final Four appearance is within reach. In 2020, Drew’s squad had as good a chance as anyone to win the national championship but the Big Dance was canceled for the first time ever due to the coronavirus pandemic.

That trend continues in 2021. The Bears were the second-ranked team in the country for a majority of the season according to USA Today and the Associated Press before dealing with a COVID-19 pause. The team was still returning to form when it fell to Cade Cunningham and Oklahoma State in the Big 12 Conference Tournament semifinals.

Nonetheless, Baylor earned a 1-seed in the 2021 NCAA Tournament for the first time in program history. A solid core led by Davion Mitchell and Jared Butler have the ultimate prize in sight.

Drew deserves credit for his success. He attributes it to his wife and faith.

I have been Blessed to have Coached a lot of Great Players and worked with Great Coaches while at Baylor. Thank you Baylor Nation for helping us build this Program! #1TGF #SicEm https://t.co/mta2DgxH81

Scott and his wife Kelly Drew are both from Missouri. Scott hails from Kansas City and Kelly from Cape Girardeau.

Together, the couple has three children: daughter Mackenzie and sons Peyton and Brody.

Christianity is the cornerstone of Scott and Kelly’s relationship. Drew is known for speaking about his beliefs to his team.

Kelly likes to keep a low profile and let Scott handle the spotlight. In 2011, the couple started the Scott & Kelly Drew Scholarship Foundation as part of the Infiniti Coaches’ Charity Challenge sponsored by ESPN.

Coaching runs in the Drew family. In addition to his father, Scott’s younger brother Bryce Drew is the head coach of Grand Canyon University.

The 2020 and 2021 Big 12 Coach of the Year has a firm support system behind him. His wife was right there from the beginning when Baylor basketball was hounded by sanctions and player departures.

The program is a consistent presence at the top of the Big 12 and in the later stages of March Madness.