Trevor Lawrence: “I Have The Option” to Leave Clemson or Stay 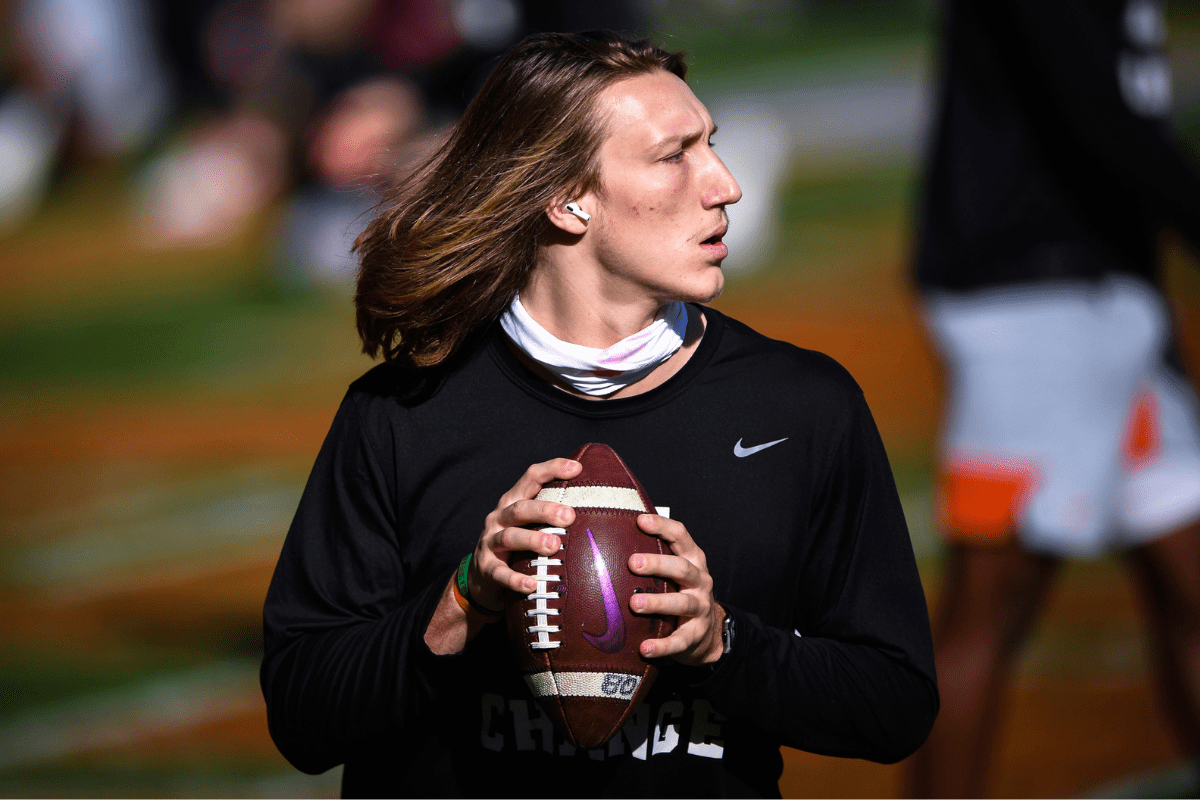 Clemson quarterback Trevor Lawrence stopped short of calling an audible on his plans to head to the NFL next year, though the likely No. 1 pick in next year’s draft did not rule out returning to school.

?My mindset has been that I’m going to move on,? said the 6-foot-6 QB with the flowing hair. ?But who knows? There’s a lot of things that could happen.?

Trevor Lawrence is leaving the door open about his football future 👀 pic.twitter.com/pbL9b4Mo6k

Lawrence had laid publicly laid out his plans before Clemson’s opener at Wake Forest last month: play this college season, graduate in December with his bachelor’s degree in marketing and get ready for the NFL.

That’s led to reports about which NFL teams might win the Lawrence sweepstakes ? and the frontrunner right now is the offensively challenged New York Jets. At 0-7, the Jets are the NFL’s only winless team.

Former NFL receiver Roddy White created a social media stir last week when he suggested that if the Jets held the top pick and he were Lawrence, ?I’d just go back? to school.

White said he is related to Clemson offensive coordinator Tony Elliott and suggested he might call Elliott and suggest the coach tell Lawrence ?if the Jets get the first pick, don’t go. Just stay one more year in college and just enjoy your time because it would be awful for you to get drafted by the New York Jets.?

Staying at Clemson another year to avoid the Jets might be Trevor Lawrence's best option, according to @roddywhiteTV pic.twitter.com/AgAPBw7uBD

White’s not the only voice that’s anti-Lawrence to the Big Apple.

Former NFL receiver Keyshawn Johnson, the No. 1 overall pick with the Jets in 1996 turned ESPN broadcaster, said his former team has a done poor job surrounding current quarterback Sam Darnold with players to improve the offense.

?You drafted a guy three years ago with the third pick in the draft because he was your Trevor Lawrence. He has nothing around him. Nothing,? Johnson said last week on his ESPN morning show.

Whenever Lawrence leaves for the NFL, he’s expected to change a franchise’s fortunes.

He’s thrown for 1,833 yards and 17 touchdowns (tied for second nationally in FBS) this season as Clemson has started 6-0. Lawrence is 31-1 as a starter in college and has the Tigers pointed toward a sixth straight Atlantic Coast Conference title and trip to the College Football Playoff.

Lawrence and the Tigers face Boston College (4-2, 3-2) on Saturday.

Eagles coach Jeff Hafley was Ohio State’s co-defensive coordinator when the Tigers defeated the Buckeyes 29-23 in the CFP semifinals last December and sees a player who put in the work to get even better this season.

Hafley said Lawrence is better in the pocket and with his decisions.

?Definitely coming back and improving, it says a lot about him,? Hafley said.

While the Jets have the inside track, there are plenty of other NFL teams that could benefit from having Lawrence on the roster.

That includes the 1-6 Atlanta Falcons, who are less than an hour’s drive from Lawrence’s hometown of Cartersville, Georgia.

Lawrence said he wasn’t a huge NFL fan growing up, although he did pull for the Falcons. He largely laughs off the Twitter posts pushing teams to lose simply to get him in their locker room.

?I try to ignore it as much as possible,? Lawrence said earlier this month. ?Obviously, if you?re on social media at all, you can?t help but see some of it. It?s just funny.?

His focus, Lawrence said, remains on Clemson’s success this season and is not worried at the moment about what happens after that.