Ever since Dabo Swinney arrived in South Carolina to take over Clemson football, the landscape changed. The Tigers have become one of college football's powers, winning multiple national championships and appearing in the College Football Playoff on numerous occasions. Clemson is now up there with Alabama, Georgia and Ohio State regarding the nation's elite in on the gridiron.

Swinney can come across as a bit eccentric, but the man knows how to recruit. He's brought in some of the best quarterbacks in Clemson history, including the golden-haired Trevor Lawrence and dual-threat Deshaun Watson.

The 10 Best Clemson Quarterbacks of All Time 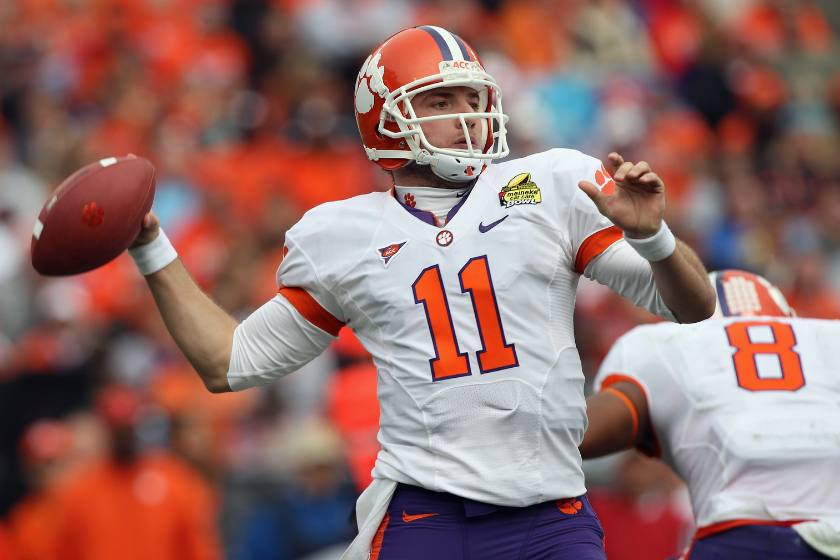 Parker is the only player on this list better known as an American baseball player. As a freshman, Parker led the Tigers to the ACC championship game and made the All-ACC freshman team. He threw 20 touchdowns that year. The thing is, Parker was also the star of Clemson's baseball team and hit 20 home runs that season. No Division-I athlete had previously notched 20 passing touchdowns and 20 home runs in the same year. Pretty remarkable.

Because of his baseball prowess, the Colorado Rockies took Parker 26th overall in the 2010 MLB Draft. He only spent two years playing football at Clemson as he went after an MLB career. Parker played a couple of seasons with the Rockies but didn't pan out. 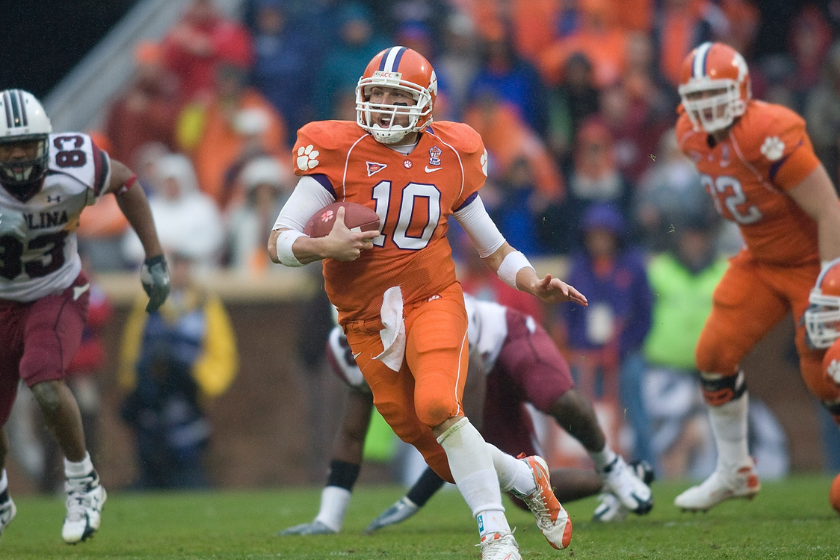 ?Harper bridged the gap for the Tigers. The Georgia native was the last starting quarterback for Tommy Bowden as head coach and the first for Swinney when he took over in the interim. In 2007, he was also second-team All-ACC behind Boston College's Matt Ryan, and he made school history many times over by breaking 28 Clemson QB records in his time. Of course, since Swinney and his recruits took over, some of those records have fallen.

#TBT - Rodney Williams led #Clemson to a 13-6 win over Oklahoma in the Citrus Bowl at the end of the 1988 season. pic.twitter.com/iZCQ9EzaMF

?These days, with Florida State on a downturn, it seems like Clemson can walk into an ACC title every season. That hasn't always been the case, but it was in the '80s when Williams was under center. He led the Tigers to three ACC titles and four bowl games, and when he left the school, his 32 wins were a record. 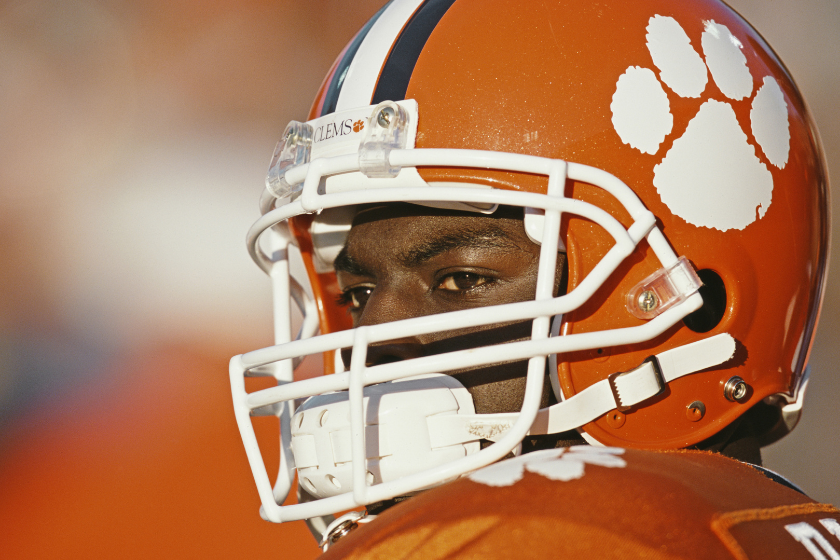 Woodrow "Tiny" Dantzler (shout out to Chris Berman) was a high school star in South Carolina before deciding to stay in state for college. Dantzler was a great athlete and made NCAA history in 2001 when he became the first FBS quarterback to notch over 2,000 passing yards and over 1,000 rushing yards in a season. He spent some time with the Dallas Cowboys and Atlanta Falcons before winning an Arena Bowl in his professional career, which is something.

Before Swinney, the Clemson Tigers had won one national championship, and that was in 1981. Their quarterback that season? That would be Jordan. He wasn't merely along for the ride, either. Jordan was the MVP of the Orange Bowl win over Nebraska that locked up the national title for Clemson. 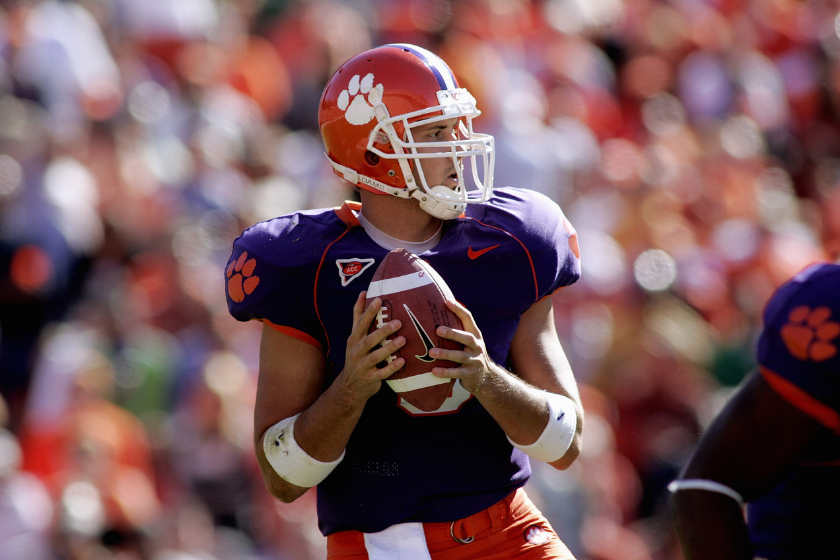 Whitehurst is perhaps best remembered for his many years as a backup quarterback in the NFL, which led to his iconic nickname, "Clipboard Jesus." He wasn't toting around the clipboard at Clemson, though.

Whitehurst was the starter for Clemson for four seasons, and he's a beloved figure for going 4-0 against South Carolina in the big rivalry game, which was far from a given in those days. "Clipboard Jesus" is also still fourth in passing yards in school history. If not for his issues with interceptions, he might be higher on this list.

You can?t mention jersey No. 4 without giving credit to another great Clemson QB, Steve Fuller (1975-1978)

Fuller?s number was brought out of retirement specifically for Watson, who also wore #4 in high school

To honor his legacy, a shoulder patch was added to DW4?s jersey pic.twitter.com/6tA1lVPT70

Fuller is the highest-ranked passer on this list not affiliated with Dabo. Although, calling him a "passer" feels strange, as he did most of his damage as a quarterback with his legs. That being said, his rushing skills led the Tigers to a lot of success. Fuller had plenty of success as well, as he won back-to-back ACC Player of the Year awards in 1977 and 1978.

Boyd set the table for the quarterbacks who followed him at Clemson. He was the first Clemson quarterback to be a first-team All-American. He ended that campaign with 346 yards and two passing touchdowns against LSU in the Chick-fil-A Bowl. Boyd led the Tigers to their first ACC title in 20 seasons and capped his last season with an Orange Bowl win over the Buckeyes, Clemson's first BCS bowl win.

To this day, Boyd still owns the Clemson career records for completions (901), passing yards (11,904) and passing touchdowns (107). And to think, he's only third on this list. 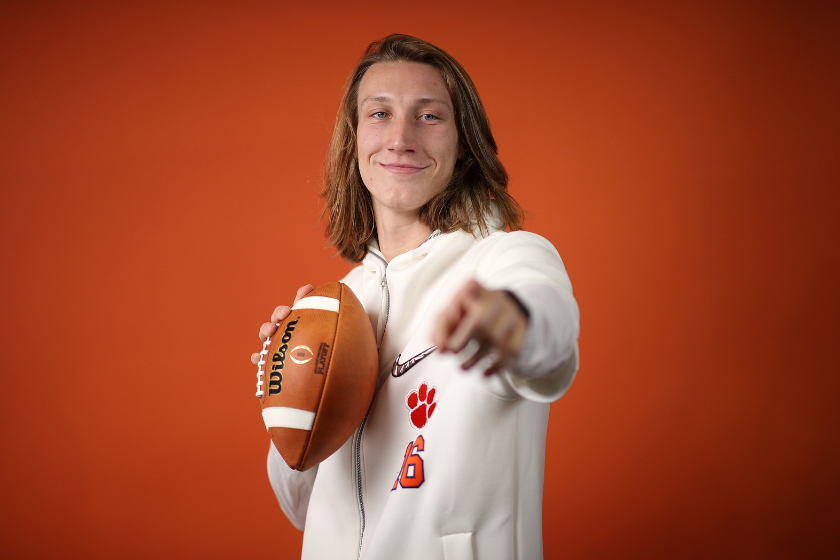 ?It's weird that Lawrence was both immensely successful but also didn't live up to his lofty expectations. Rivals considered him the best traditional quarterback recruit in the country. After he took over for Kelly Bryant as a true freshman, he didn't look back. He led Clemson to wins over Notre Dame and Alabama in the playoffs for a national title as a freshman. He was the MVP of the championship game. That made him the first true freshman since Jamelle Holieway of Oklahoma to lead his team to a championship.

Lawrence was first-team All-ACC twice and first-team All-American once. He was a Heisman Trophy finalist in his final season, though he finished second to Devonta Smith. However, the fact he didn't win the Heisman surprised people. It seemed like a given, but it never happened. Lawrence still had a great college career, though, and did fulfill one prediction: He was the first-overall draft pick in the 2021 NFL Draft by the Jacksonville Jaguars. 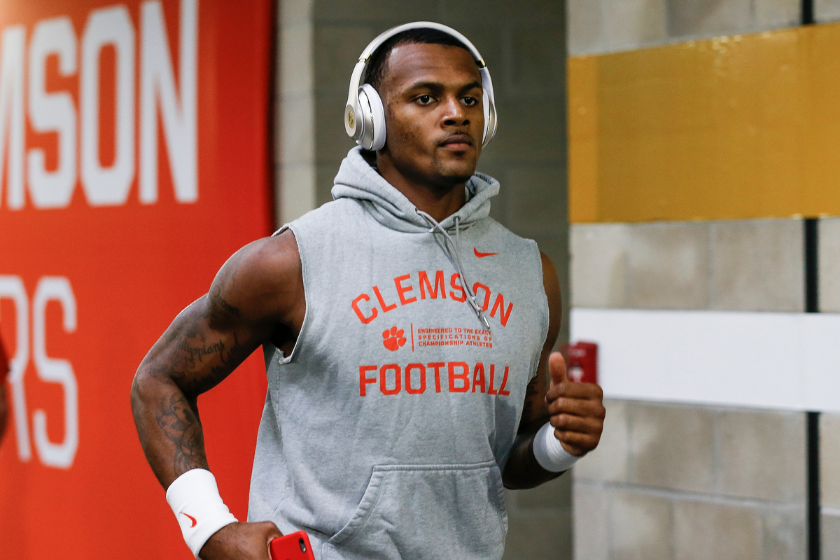 Had Lawrence stuck around for another season, he probably would have topped this list, but who can say no to being picked at the top of the first round of the NFL Draft? Well, other than Peyton Manning back in the day. Watson also only spent three seasons with Clemson. Still, he was the one that helped establish the dominance the Tigers enjoy to this day.

He didn't just throw for over 2,000 yards and rush for over 1,000 yards in a season like Dantzler. He threw for over 4,000 yards and rushed for over 1,000 yards in 2015. Watson won a national title and was the MVP of the national championship game, just like Lawrence. On top of that, Watson won two Davey O'Brien awards, two Manning awards, an ACC Player of the Year and ACC Athlete of the Year twice. It also helps to have a wide receiver like Mike Williams as your go-to target.

Since being taken with the 12th pick in the NFL Draft, he's also made three Pro Bowls with the Houston Texans and will look to continue that success as the signal-caller for the Cleveland Browns. Watson has had the best NFL career of these quarterbacks. He also had the best college career.

MORE: Seeing $2 Bills? That Means Clemson Fans Are in Town