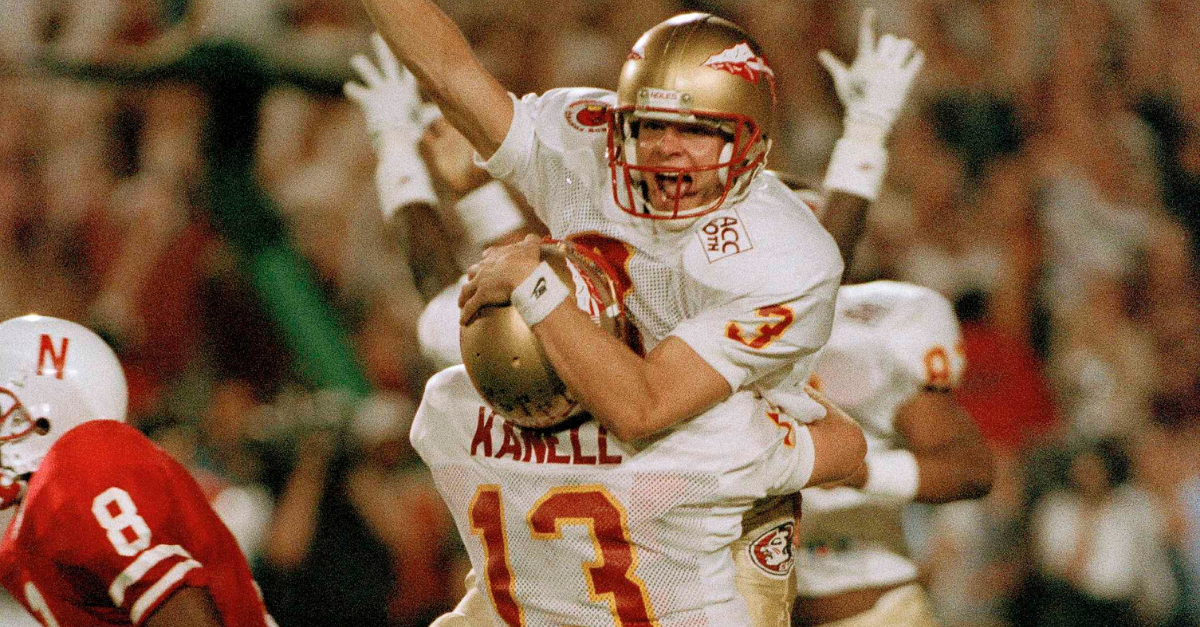 The Florida State Seminoles had so many great moments under head coach Bobby Bowden. He?s one of the best in college football history for a reason. What he did in Tallahassee year after year was nothing short of legendary, but perhaps his greatest win was the 1994 Orange Bowl for his first national championship.

Heading into that New Year?s Day showdown in Miami, the Seminoles were heavy favorites over the Nebraska Cornhuskers for the national title. They were that good and headlined by Heisman Trophy winner Charlie Ward. Nobody thought the game would be close. They were wrong.

Despite being 17-point underdogs, the Huskers took the lead with 76 seconds left in the fourth quarter. A minor miracle was needed. Then Ward put together an incredible drive and set up kicker Scott Bentley for the go-ahead field goal with 21 seconds remaining.

RELATED: Rix to Sam Made ?The Swindle in the Swamp? an Instant Classic

The 1994 Orange Bowl game on NBC pitted two iconic coaches in Bobby Bowden and Tom Osborne, a pair of elite quarterbacks in Charlie Ward and Tommie Frazier, and solid backs in William Floyd and Lawrence Phillips, who both scored touchdowns that night. Yet, for some reason, it was more of a dog fight than a track meet, and both teams leaned on their kickers to save the day.

FSU desperately needed kicker Scott Bentley to be good in the NCAA national championship game, and he delivered. He made three of four field goals from 34, 25, and 39 yards to keep the Seminoles in striking distance before the final minute of the game. His fourth make, however, is what he?s most known for.

With 21 seconds left, Bentley made a 22-yard field goal to give FSU the 18-16 lead. He knew it was good the moment it left his foot and began celebrating. He wasn?t alone. The entire football team was ecstatic and jumping around. Bowden even had to come onto the field from the sideline to calm everyone down.

The celebration had to be put on hold, though. Nebraska set up a game-winning, 45-yard field goal with one second left after a big reception by tight end Trumane Bell. However, Byron Bennett?s kick hooked wide left and the party was back on.

The Seminoles finished the season 12-1 with their lone loss coming to Notre Dame, which defeated Texas A&M in the Cotton Bowl that year.

Bowden went on to win another national championship against Virginia Tech in the 2000 Sugar Bowl and finished his career with 12 ACC titles. He is one of the greatest coaches ever, and that first championship really brought his legend to life.

This article was originally published June 17, 2020.