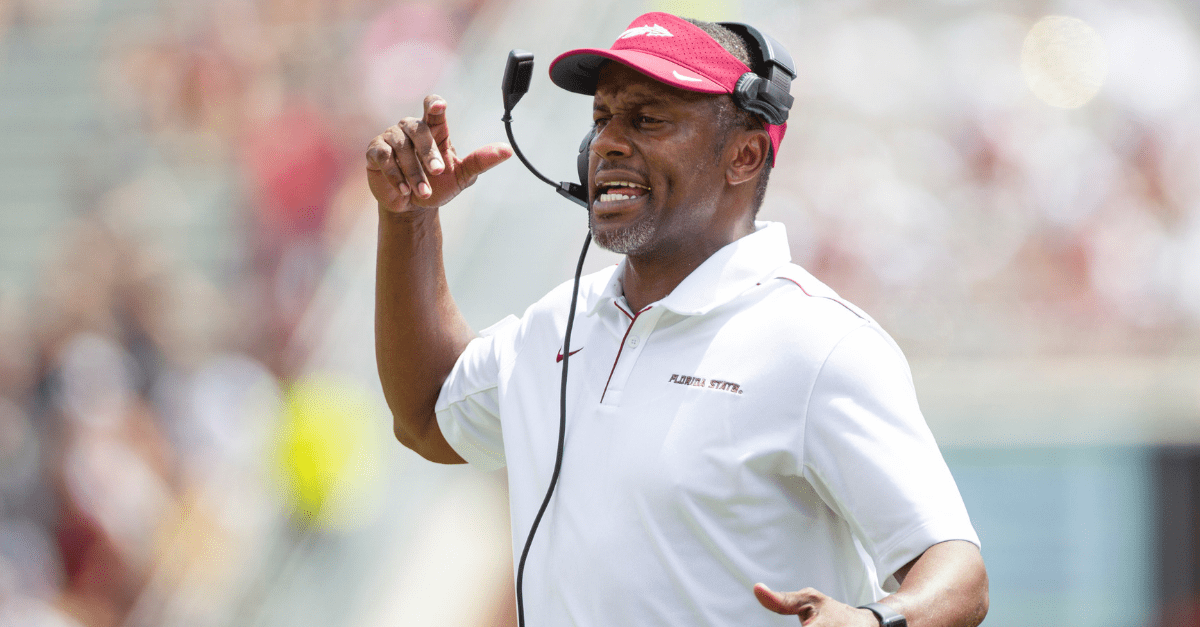 The Florida State Seminoles began their college football season with the offensive explosion everyone would have hoped, but it unfortunately regressed back to their offense from last year in the second half against Boise State.

After jumping out to an early lead in the season opener against the Boise State Broncos, the Seminoles collapsed in the second half and somehow blew an 18-point lead. There are definitely a few reasons the team fell apart and lost the game.

After finishing the 2018 season with a 5-7 record, including 3-5 in the ACC — the first losing record for the program since 1976 — head coach Willie Taggart hired Kendal Briles as the offensive coordinator. His success with offenses over the last few seasons gave hope to FSU fans, and in the first half of the season opener, that hope seemed to be well placed.

The game — originally set to be played in Jacksonville as a neutral site game but was moved to Tallahassee and played in Doak Campbell Stadium due to Hurricane Dorian — saw the Seminoles jump out to a 31-13 lead before halftime. Junior quarterback James Blackman led the way with 278 yards and three touchdowns in the first two quarters.

Then, the wheels fell off the bus, and here’s why:

If a baseball team relies all season on home runs and have no ability to pick up singles and doubles, they can struggle to consistently score runs. Well, that is what happened with the FSU offense. Four plays accounted for over half of their yards gained during the game.

The first big play of the game came on the fourth play of the opening drive when junior running back Cam Akers ran for a 38-yard touchdown. Akers finished with 116 yards and a touchdown on 15 carries. A bright spot is that Akers averaged 7.7 yards per carry, which is a huge improvement from his his 4.4 yard average as a sophomore.

On the first play of the next offensive series for the ‘Noles, Blackman connected with Tamorrion Terry on a screen pass that he took that 75 yards for a touchdown. The top target for Blackman this season, Terry only caught three passes for 24 yards during the rest of the game.

Two drives later, Blackman hit Warren Thompson for 51 yards to bring them down to the one-yard line and give the Seminoles an eventual field goal. And with just over four minutes left in the second quarter, Blackman completed a pass deep down the middle to Keyshawn Helton for a 58-yard touchdown.

If you remove these four plays, Florida State only had 204 yards in the game. So while the offense was pretty good for an entire half, it was also just a few plays away from being completely dysfunctional like it was in the second half.

After halftime, the offense was awful. Of their eight second-half drives, they punted on six and had a fumble and turnover on downs during the other two. They didn’t pick up 20 yards on a single drive after halftime.

Their last drive of the game, which should have continued with a fourth-down completion to tight end Tre’ McKitty, was ended because of two penalties.

And the offense wasn’t the only issue.

The Seminoles’ defense may have been decent for the first half of the game, but without an offense making plays, it completely fell apart. Against freshman Hank Bachmeier, who was making his first start, they were torched in the second half.

The true-freshman quarterback ended the game with 407 yards and a touchdown through the air. Last year, the defense struggled to defend against the pass as well and even gave up over 400 yards against FCS-opponent Samford early in the season.

It wasn’t just the passing game that killed the Seminoles, though. Running backs Robert Mahone and George Holani combined to average 5.6 yards per carry. Mahone led the way with 142 yards and two touchdowns on 24 carries.

Florida State didn’t allow any truly big plays throughout the game, but they allowed the Broncos to march up and down the field, picking up 38 first downs. FSU picked up just 19 in the game. Boise State was also able to convert on 10 of their 19 third-downs, showing they struggled to get off the field in big moments.

That failure to recover a fumble is the most Florida State thing ever. pic.twitter.com/ufXXnyFbaK

But perhaps the biggest play of the game came early in the fourth quarter when the Broncos were driving. With just under 14 minutes left in the game, Holani caught a pass on the sideline and got down inside the Florida State five-yard line, but fumbled the ball. Both defensive back Levonta Taylor and linebacker Dontavious Jackson had an easy opportunity to jump on the ball, but instead tried to scoop up the ball with each failing and Boise State recovering, leading to Mahone scoring a go-ahead touchdown.

The inability to get on this fumble and keep them from taking the lead was a really tough play that could have changed the momentum of the game. Instead, the Broncos took a 33-31 lead, and then they kicked a field goal on their next drive to go up by five.

Florida State looking like a very tired defense. Played 82 plays and still not through the third quarter. Offense needs a drive here.

The defense was on the field for 108 plays, totaling 40 minutes and three seconds because they couldn’t get stops on third down.

They also allowed eight trips to the red zone, though the Seminoles’ defense forced five field goals. The combination of a struggling third-down defense and an offense that couldn’t stay on the field is what led to 23 consecutive points for Boise State.

Although they lost Brian Burns to the NFL, FSU was at least able to get a solid pass-rush on Bachmeier. The ‘Noles recorded six sacks in the game with Carlos Becker leading with two sacks and a forced fumble.

Even though Boise State is much better than most teams outside the Power Five, playing like this should scare FSU fans.

With matchups against  Virginia, Louisville, North Carolina State, Clemson, Wake Forest, Syracuse, Miami, and Boston College coming after their game against Louisiana-Monroe, there are no breaks for this team and could be another long season.