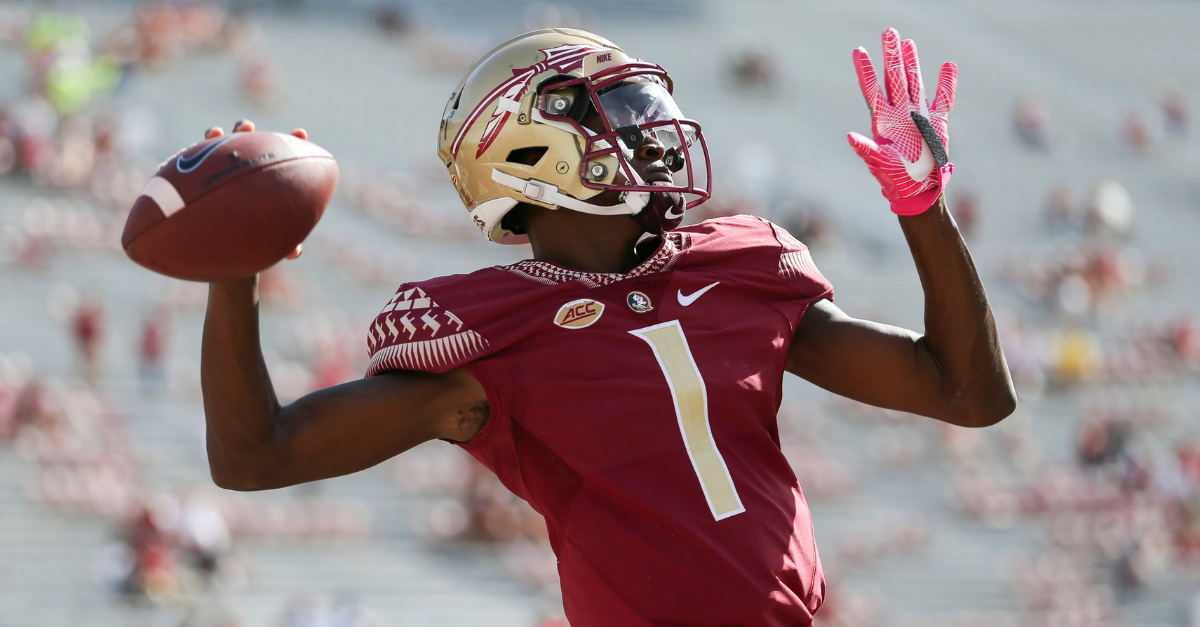 During the second spring football game under head coach Willie Taggart, the Florida State Seminoles had some positives and only a few things that need work before they open their regular season football schedule on August 31 against Boise State. Overall, it was a really impressive day.

The Gold Squad, led by quarterback James Blackman, won the game 27-21. The biggest takeaway from the game was the obvious difference in the passing attack. On top of that, there were some other things that should be looked at as the spring comes to an end and we get closer to the 2019 college football season.

It’s tough to make definitive statements about a team after watching a game where the talent is split up, but there are several things that stood out. I won’t bother going into the offensive line because you really can’t grade a unit that had it’s top guys split up and won’t be playing together in these groupings.

Here’s what I saw from some of the rest of the ‘Noles at the annual Garnet and Gold Spring Game.

Passing Attack Will Be Dangerous

“James Blackman to Tamorrion Terry for the TOUCHDOWN.”

You’ll probably be hearing that a lot in 2019. #Noles pic.twitter.com/aoRdrQeC7k

There are three things I liked about the passing game.

1. Receivers were open down the field just like Baylor’s offense during Kendal Briles’ time as their play caller.

2. The quarterbacks were delivering the ball quickly and accurately on short passes to the outside.

3. Balls were being thrown all over the field.

Not only was Blackman hitting passes deep down the field, but he also had some nice throws on intermediate routes in the middle of the field. The success of plays like that really help set up quick throws to the outside that never seemed to work last season.

I think the most important part of this was how quickly Blackman was able to get rid of the ball while also looking downfield. With the offensive line struggles of the past few seasons, having a quick-hitting offense is important and can help counteract those problems up front if they continue. This was something they tried to do last season, but the deep passing attack was extremely inconsistent so defenses could focus on taking away easy throws.

Taggart on FSU's most improved player of spring:

"DJ (Matthews) & that's in every aspect. He's done a great job of holding guys accountable in receiver room & we talked about the standard, buying in to Coach Dugans' vision & selling it to young guys."https://t.co/nm0sRMjlJs pic.twitter.com/0TbOBj64EY

Eight players caught a pass of at least 20 yards with Keyshawn Helton, D.J. Matthews, and Tamorrion Terry leading the way. Terry had the first big play of the day with a 50-yard touchdown on the Gold Squad’s second drive of the game. He finished with 77 yards and that touchdown on five catches. As the leading, returning receiver, Terry’s freshman-record 744 yards last year to go along with eight touchdowns should improve greatly in this offense.

Keyshawn Helton had a game-high 157 yards on eight receptions, close to topping his output from all of last season as a freshman when he caught 11 passes for 176 yards and one touchdown. Matthews, who Taggart said was the most improved player of the spring, led all players with 10 catches for 122 yards.

They force a field goal for the gold squad.

Last season, the Florida State football team had one of the worst pass defenses in the country. At 268.7 yards allowed per game, they ranked 119 out of 129 FBS teams, so some improvements were definitely needed. With 596 passing yards allowed in the first half of the spring game, it certainly looks like there’s still work to be done.

Now, obviously this isn’t a great way to judge the product because the offense had an advantage in the passing game, but there were a lot of receivers left wide open during the game. Cornerback Levonta Taylor left the game early and the top defensive backs were split up, so things should change quickly before August rolls around.

A big standout from this group though was Akeem Dent, the freshman who many expected to impress early and compete for playing time. On the first defensive series for his squad, Dent recovered a fumble, and he was all around the ball on what seemed like every play in the first half. He also flashed an attitude and leadership that this defense desperately needs.

Akers and Laborn are a Dynamic Duo

.@thereal_cam3 walks into the end zone for the touchdown!

All tied up at 7. #OneTribe pic.twitter.com/KfRqjuNv8i

One of the biggest missing pieces from 2018 was a serious rushing attack. Khalan Laborn was injured in the second game of the season, and Cam Akers played much of the season with an ankle injury. But if they can stay healthy this season, this tandem could put up some big numbers in an offense that spreads out defenses to create some big openings.

Akers finished with just 706 yards last season after setting the FSU freshman rushing record in 2017. If the offensive line can make some improvements and the passing game is a little more dynamic, watch for Akers having a career year with Laborn having a great season behind him.

In the spring game, they combined for 25 carries with 87 yards and two touchdowns. For quite a few of their carries, they weren’t allowed to fight for extra yards before the play ended, so their stats don’t tell the full story. They were running hard and I really liked what I saw, especially on both of Akers’ touchdown runs at Doak Campbell Stadium.

With Briles taking over play calling duties in his first season in Tallahassee, I was expecting a little bit of confusion since it’s so up-tempo, but that was not the case at all. Starting with Taggart’s fast-paced offense last season, they ran with that tempo and looked great in the spring game in Briles’ image.

For most of the game, the offense was getting right to the line of scrimmage and knew exactly what they were doing. If the offense is able to move this quickly and mistake-free, this could be a scary group for many ACC opponents. Scheming can often cover up some holes in a team’s talent or depth, and moving this quickly and spreading out a defense like this should mask the few issues this FSU football team has and make them a serious threat every single week.