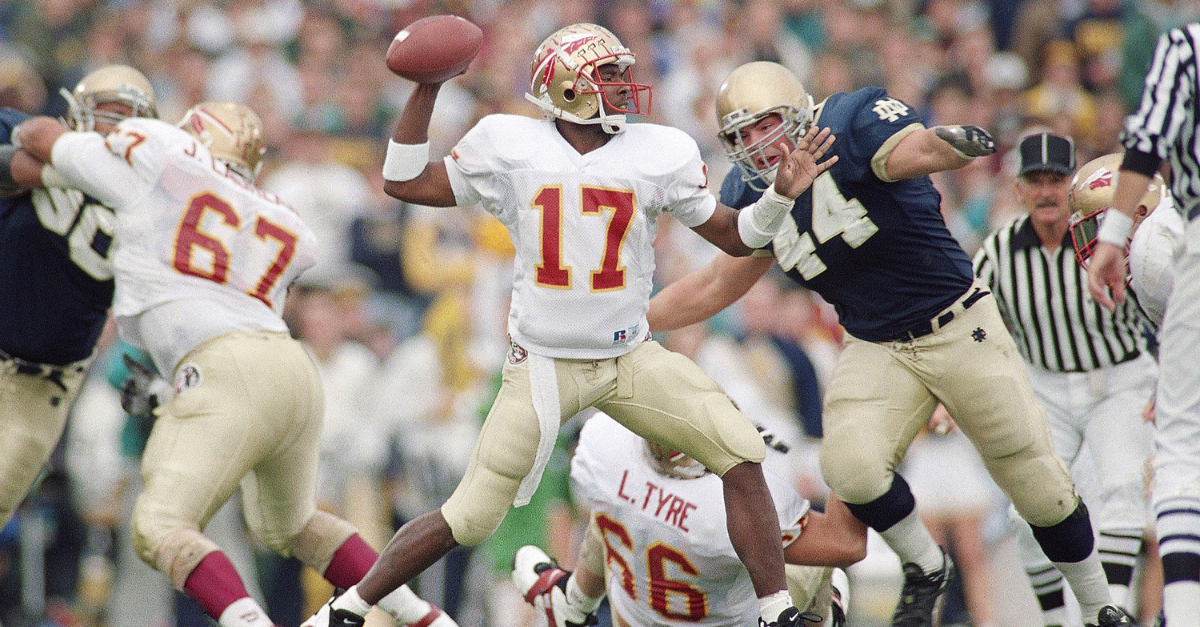 With a college football program like the Florida State Seminoles, there has been so much talent that records are really impressive. However, some records have been so crazy, there really can’t be much hope of ever matching or breaking them.

Current and future ‘Noles may have dreams about seeing their names in the Florida State record book, but these are nine records that they shouldn’t waste their time trying to top, because it is unlikely they could beat them.

RELATED: A Celebration of the Greatest Bowl Game Streak in College Football History

Here are the nine incredible Florida State football records from NCAA All-American players under legendary head coaches such as Bobby Bowden and Jimbo Fisher through the years at Doak Campbell Stadium in Tallahassee, Florida.

Saying the Seminoles had a dominant defense in 1964 would be an understatement. And sure, football was different back then and didn’t have the crazy stats and scores of today, but they were good. To hold your opponents to less than eight points per game and 181 yards per game, including four shutouts, gives you some great opportunities to win games.

Here’s some perspective as to why these numbers are so unlikely to be broken: Since 2010, only one team has held opponents to less than 10 points per game in a season. And only once has a team held their opponents under 240 yards. That one team was the 2011 Alabama Crimson Tide, which is seen as one of the best defenses in college football history.

Record: 5 receiving touchdowns in a game

In 1968, Ron Sellers caught 14 passes for 260 yards and five touchdowns against Wake Forest.  Not only would that be an insane game by today’s standards, even in the Big Ten where offenses put up gaudy numbers on a regular basis, but just imagine in 1968. Five touchdown passes for a quarterback is an amazing game, and is just one shy of the record for an FSU quarterback, but imagine all of them going to one player.

Three receiving touchdowns would be a dominant performance for a receiver, so adding two on top of that seems like a tough milestone to catch.

Record: 29 tackles in a game

Some linebackers are just always around the ball carrier. No matter where it is on the field, there are just players who get to the ball and make tackles all game long. But to record 29 tackles in a single game is crazy. Hell, 20 tackles in a game is awesome. McCullers piled up 29 tackles against the Texas A&M Aggies in 1968, just a week after having 26 tackles against the Florida Gators.

An example of how tough it would be today, Reggie Northrup has had the most tackles in a season over the last 10 seasons for Florida State. The most tackles he had in a game over his career was 14, less than half of what McCullers did in a game. Luke Kuechly, who had over 150 total tackles in three-straight seasons, had a career-high of 23 tackles in a single game. So getting to 20 is tough and takes a great player, but getting to 29 just seems close to impossible now.

RELATED: Terrell Buckley?s Pick-Six Versus Michigan Left a Heisman Winner In The Dust

Record: 12 interceptions in a season

Most players could go their entire four-year career in college without intercepting 12 passes. Terrell Buckley did it in one season. He finished his career with 21 interceptions, but 12 in one season is amazing. Tarvarus McFadden had eight in 2016, Samari Rolle had seven in 1997, and Patrick Robinson(2007), Tay Cody (2000), and Mario Edwards (1998) each had six in a season. Right now, a player would only have to intercept four passes for every five games if they were to make a run to a national championship and play 15 games, where Buckley set his record in 12 games.

Record: 322 rushing yards in a game

Greg Allen began his Florida State University career with a bang, rushing for 322 yards as a freshman in 1981 against Western Carolina. This game accounted for nearly half his rushing yards on the season, where he finished with 888 yards. He rushed for over 10 yards per carry, toting the rock 32 times as well as returning a kickoff 95 yards for a touchdown in the first quarter.

I think in the right football game, Dalvin Cook could have broken this record if he had been given over 30 carries, but it just shows how it is really tough to just go for 300 yards, no matter how dominant a running back is every week.

Record: 858 yards of total offense and 40 first downs in a game

The offense really came together well for a great game against Maryland to finish the ACC schedule undefeated. They did it in style, scoring 69 points and racking up 858 yards and 40 first downs. Charlie Ward, a year away from winning the Heisman Trophy, threw for 395 yards and four touchdowns on 26-for-37 passing attempts. He also rushed for 111 yards on seven attempts. Clyde Allen picked up 103 yards, while Tiger McMillan had 70 yards. Both of them did it on just five carries each.

To pick up nearly 900 yards in a game, a team has to be nothing short of prolific. That could happen, but to do that while also picking up 40 first downs is really impressive because not only is the offense making big plays, but also methodically driving down the field consistently.

Record: 6 blocked-punt touchdowns in a season

To block six punts in a season is really impressive, but to take six blocked punts back for touchdowns in a season is crazy. At what point does the opposing team put in some sort of package to protect the punter and make sure he can get it off? That just goes to show how impressive it is. I think today, teams would be aware of the punt-blocking ability of a team enough to at least slow them down. Even if there was a chance they could block six punts in a season, which is tough, returning six for touchdowns seems just impossible.

Record: 94 extra points in a season

To kick 94 extra points in a single season is a sign of how great the offense was. But Roberto Aguayo made all 94 attempts and that is a number that would be tough to beat. For example, the following season in 2014, when the offense was still pretty good, Aguayo only made 55 extra points, which is the highest number since.

Aguayo won the Lou Groza award in 2013 and was selected in the second round of the 2016 NFL Draft.

Record:13 forced fumbles in a season

Could you imagine having a player on your team that forced a fumble every single game? That is purely insane. Hell, I think five or six forced fumbles in a season is really impressive and something to be excited about. Ron Simmons, a future WWE wrestler, forced 13 fumbles in a season… in 11 games…

MORE: The 12 Greatest ?Noles to Ever Play at Florida State