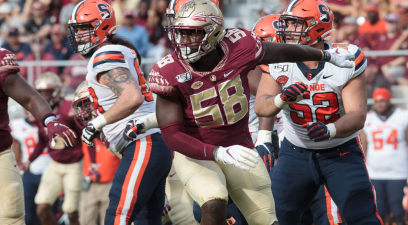 Florida is a hotbed for football talent and four-star cornerback Omarion Cooper is looking to become the next player from the Sunshine State to make it to the NFL.

Cooper attended Lehigh Senior High School (Lehigh Acres, Fla.) and has been lauded for his on-field efforts. He isn’t traveling far to play in college, either.

He is ready to go for the 2021 Florida State Seminoles.

The Duke is headed to Tallahassee. Welcome, @OmarionC2#NSD21 | #Tribe21

The Wolverines were definitely interested because the only other cornerback they signed in this football recruiting class is three-star Ja’den McBurrows.

Cooper had been committed to head to Tallahassee since June 2020 and made it official by signing his Letter of Intent on National Signing Day.

FSU’s standing in the ACC has not been great in recent years, so it’s going to take an “all hands on deck” approach to right this ship in the near future.

Omarion Cooper is much more than a competent defensive back option.

During his three years on the varsity team, he totaled 61 tackles and a trio of interceptions. He has great ball skills, which is something mightily important for a cornerback.

The 247Sports Composite is sold on Cooper’s ability to be a difference-maker, and scouts believe that his best football is ahead of him as he matures physically.

His projectable frame is one that talent evaluators love, and Florida State’s coaching staff must be excited to start working with him.

Omarion Cooper has a realistic shot to hear his name called on the NFL Draft on ESPN if he can learn from his coaches and fellow teammates and get acclimated to college football quickly. FSU is still looking for all the help it can get, so Cooper may end up being a nice find for this rebuilding team sooner rather than later.