Eleven years ago, Austin Aune was a promising two-way athlete at Argyle High School in Texas. The 6-foot-2 quarterback was committed to TCU -- with hopes of playing football and baseball. He finished his senior season playing in a state championship game at AT&T Stadium, home of the Dallas Cowboys.

Then, the New York Yankees called.

A seven-figure check lured Aune away from his dream of playing college football, and more than a decade since prom, the 29-year-old passer is leading the North Texas Mean Green as the oldest quarterback in Division I college football in the modern era.

Aune is more than just a super duper senior (he's actually a junior and could play next season at 30). He's a father, husband and owner of one of the NCAA's most interesting stories this season.

While Yankees slugger Aaron Judge was lighting up pitchers and breaking the American League home run record this season, Aune has been busy leading the Mean Green to a 6-3 record.

The correlation between the two? They were once teammates in the Yankees minor league system.

"Couple lockers down from me was Aaron Judge," Aune told WFAA. "Some of the guys that are on the big league roster now, I knew back then."

Aune was selected in the second round of the 2012 MLB Draft -- nine picks ahead of New York Mets All-Star closer Edwin Diaz -- and spent six years in the minor leagues before calling it quits. He retired a career .226 hitter. The Yankees released him in 2017.

"The 27-time world champs. That was an opportunity I didn't want to miss, either. To become a professional athlete at the age of 18 was super enticing," Aune told The Washington Post.

Aune turned his attention back to college football. At 25, he enrolled at Arkansas but transferred to North Texas in 2018. He earned the starting role in 2020 and 2021, throwing a combined 22 touchdowns to 13 interceptions. So far in 2022, he has a 28-11 touchdown-to-interception mark and is coming off a win over FIU, in which he threw for 414 yards and five touchdowns.

He did this all while raising a 10-month-old daughter, Palmer, with his wife Kristin. The fact that he's a father is even a subject for the trash talk he hears on the field.

Aune's ultimate goal is to make it to the NFL. At his current age, he'd be the 11th-oldest starting quarterback in the league. Still, Aune is far from an anomaly.

A History of Old Quarterbacks 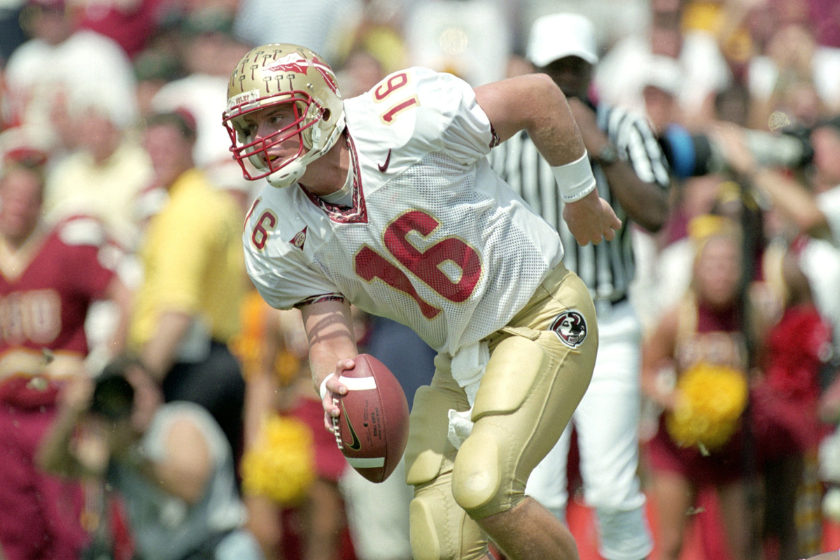 RELATED: Chris Weinke Won the Heisman at FSU, But Where is He Now?

Most notably, Brandon Weeden became the oldest first-round pick at 28 back in 2012 when the Cleveland Browns selected him. Weeden was a first-round pick by the Yankees in 2002 and spent time in the minor leagues before heading to Oklahoma State.

Chris Weinke became the oldest quarterback to win the Heisman Trophy in 2000. He, too, spent time in minor league baseball with the Toronto Blue Jays before taking his talents to Florida State University. He took the 'Noles to a national championship in 1999.

Austin Aune would likely need to do something similar to become the next great story, like those two. And even if he doesn't, what he's accomplished in two different sports, is extremely impressive.

MORE: The 10 Oldest NFL Players Ever to Take the Field