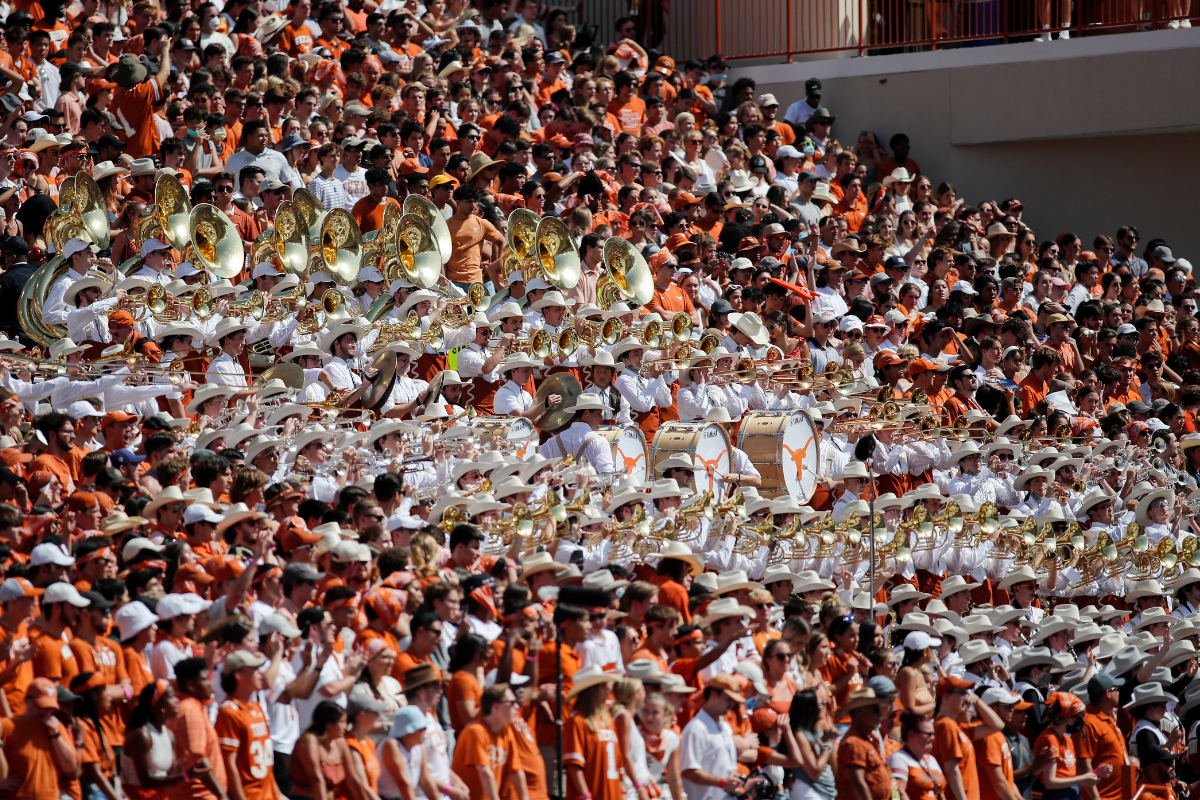 Not all traditions and chants are of the happy-go-lucky variety. Many of these storied practices were carved into our school’s lore in a different time, when our country looked much different. Since then, college football traditions throughout the country have been examined under a microscope.

The Florida Gators dropped their “Gator Bait” chant because of the history of racist imagery associated with it. Other schools, like Florida State University, have come under fire for their use of offensive mascots — don’t worry, FSU has a working relationship with the Seminole Tribe that cherishes and teaches people about the culture.

Last year, the Texas Longhorns found themselves in a similar situation when players and students called for the school to stop playing “The Eyes of Texas” spirit song at football games because of racist undertones and a racist past. The stand took place after George Floyd’s killing sparked protests around the country.

What exactly are those lyrics and why are they considered racist by some?

“The Eyes of Texas” Lyrics

RELATED: How ?Bevo? the Texas Longhorns Mascot Got His Nickname

Here are the lyrics to the song likely everyone who’s ever attended a sporting event at the University of Texas at Austin has sung at some point.

And here’s Hank Thompson’s full version of the song:

Maybe that doesn’t look racist on the surface, but some have claimed it is.

Why “The Eyes of Texas” is Racist

This is a tour stop on Dr. Gordon’s Racial Geography Tour at the Texas Cowboy Pavilion. He discusses the origins of “The Eyes of Texas” and the Texas Cowboys history of minstrel shows. Take the full tour at https://t.co/XyzOtZqMnU pic.twitter.com/PW8hkrWdQG

The song was originally written in 1903 by UT student John Sinclair and is set to the same melody of “I’ve Been Working on the Railroad.” Sinclair was a band member at the time and wrote the song lyrics after fellow band member Lewis Johnson asked him to. Johnson also happened to be the program director of the Varsity Minstrel Show that raised money for the school’s track team. The song was first played at a minstrel show. Here’s where it gets sticky:

According to UT Professor Dr. Edmond Gordan (via KHOU 11), the lyrics aren’t necessarily racist but the song’s history definitely is.

The Texas Cowboys school spirit association was a key social group on the UT campus for decades. In the past, Gordan said members would put on blackface and perform a sort of a minstrel show each year for their schoolmates.

Gordan said the “The Eyes of Texas” is a satirical rendition of Confederate commander Robert E. Lee?s saying “the eyes of the south are upon you,” which was made popular on the UT campus by former university president [William Prather.] — KHOU 11

Should be easy enough to connect the dots here. If a song was popular at minstrel shows, which were inherently racist and made fun of black people, then the song likely is too. That isn’t what the University of Texas said, however.

so texas did play the eyes of texas in the stadium. i think i’m only fan who refused to participate. #hookem pic.twitter.com/rrIGRVkpON

In a university report released in March 2021, the school took 95 pages to determine that the song had “no racist intent” despite writing about the “uncomfortable” history behind what used to be the school’s fight song.

“These historical facts add complexity and richness to the story of a song that debuted in a racist setting, exceedingly common for the time, but, as the preponderance of research showed, had no racist intent,” the report stated.

Here’s another line from that report:

“The research leads us to surmise that intent of the ‘Eyes of Texas’ was not overtly racist. However, it is similarly clear that the cultural milieu that produced it was.”

You decide for yourself: If a song was written for and popularized in a racist setting by racist people, does it make it racist?

The Eyes of Texas pic.twitter.com/Q3FefG6CF3

Interim UT president Jay Hartzell announced the school song would continue being played by the Longhorn band at home games in Darrell K. Royal-Texas Memorial Stadium this season and beyond. Texas legends like Earl Campbell and Ricky Williams voiced their support for keeping the song as the alma mater.

None of this stopped the Texas NAACP from filing a federal civil rights complaint against the university in September 2021. As ESPN noted, the complaint alleged that “Black students, athletes, band members, faculty and alumni are being subjected to violations of the Civil Rights Act.”

The NAACP has filed a complaint w/ the feds over the performance of the Eyes of Texas, @UTAustin's fight song, which has its roots in minstrelry. Students "suffer humiliation and are relegated to a lowered status by the continued use of this song," says the complaint.#longhorns pic.twitter.com/cfFzOPjd1R

So, what do you think? Are black student athletes and football players being subject to offensive content when the song is played at each game? Either way, it doesn’t look like this matter will be easily resolved.

MORE: Florida Drops Famous “Gator Bait” Chant, But Why Is It Racist?