Florida Drops Famous “Gator Bait” Chant, But Why Is It Racist? 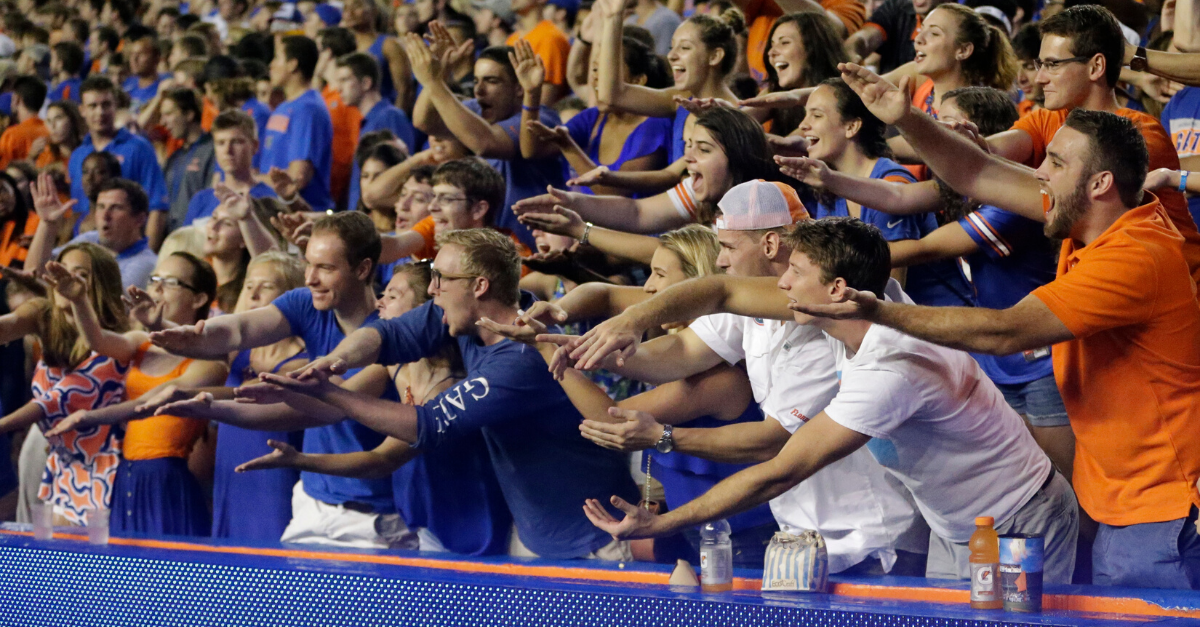 If you are like me or anyone who has ever cheered on the Florida Gators in The Swamp, you’ve raised your arms and chomped them down while the University of Florida band plays “Gator Bait.” It’s one of the first (and easiest) chants you learn when you step foot in Ben Hill Griffin Stadium for a football game.

The chant, often echoed throughout Gainesville following a failed Georgia third-down conversion or an LSU missed field goal, is a timeless two-word phrase in the Southeastern Conference. Right next to Mr. Two Bits and “We Are The Boys”, it’s been a staple in the school’s lore for as long as many alumni can remember.

Another step toward positive change against racismhttps://t.co/O8uGuOjB2P

University of Florida President Kent Fuchs wrote in a letter Thursday to the UF community that the cheer will no longer be performed by the Gator Band. It is essentially being scrapped from anyone or anything associated with the University Athletic Association.

“While I know of no evidence of racism associated with our “Gator Bait” cheer at UF sporting events, there is horrific historic racist imagery associated with the phrase. Accordingly University Athletics and the Gator Band will discontinue the use of the cheer,” Fuchs wrote.

The cheer has frequently been used after a quick band intro, followed by fans chomping twice with their arms and cheering “Gator Bait.”

In addition, the school president outlined how UF plans to educate its students, faculty and staff about racism through things like a task force. He also said he was committed “to removing any monuments or namings that UF can control that celebrate the Confederacy or its leaders,” which is a good start considering the school’s Reitz Union is named after J. Wayne Reitz, a man who was “incredibly homophobic and undeniably racist.”

You can read more about about his plans here.

This move comes on the heels of Black Lives Matter protests following the death of George Floyd in Minneapolis during an already hectic coronavirus pandemic, and the school is trying to put itself on the right side of history — or at least avoid what it sees could be a public relations nightmare.

UF isn’t the only school, company or organization reviewing itself. Aunt Jemima announced it was changing its name and removing its image that was based on a racial stereotype. University of Texas athletes want to do away with “The Eyes of Texas” song that is rooted in racism. This is happening everywhere.

The ‘Gator Bait’ chant doesn’t have to be overtly racist for us to realize we should stop saying it.

Why The Phrase “Gator Bait” Is Racist

For anyone complaining about University of Florida ending their "gator bait" chant. Here's why:

Black babies were literally used as gator bait before and it became a thing. pic.twitter.com/TeseNQOImc

RELATED: Florida RB Poops Pants, Calls It ?Best Thing That Could Have Happened?

When fans chomp down and yell out those two little words, they likely don’t even think twice. “Gator Bait” is usually said to Seminoles and Bulldogs after a UF win.

But in history, “gator bait” and “alligator bait” has a really awful, alarming and racist past.

In the late 1800s and early 1900s, black children were used as actual alligator bait. According to the Jim Crow Museum of Racist Memorabilia at Ferris State University, “African American babies being used as alligator bait really happened, and it happened to real people. It doesn’t seem to have been a widespread practice, but it did happen.”

In addition, the museum cites that “alligator bait” was a common racial slur used throughout the early 20th century. Hall-of-Fame MLB pitcher Bob Gibson, who was black, was even called “alligator bait” as recently as 1968.

The awful truth behind the University of Florida's racist "Gator Bait" chant. This needs to stop! pic.twitter.com/6nDUYjHdnF

This shouldn’t be a hard choice getting rid of the ‘Gator Bait’ cheer. I’m disgusted for not knowing any of the history behind the phrase itself, let alone actually saying it myself.

Of course, not everyone agrees.

Thanks to enlightened SJWs and cancel culture, I guess Lawrence Wright is racist now for saying Gator Bait pic.twitter.com/fRxvPxr286

Lawrence Wright, the former defensive back and 1996 Jim Thorpe Award winner, once famously said ?If you ain?t a Gator, ya Gator bait, baby? after UF’s win over FSU in 1995.

Wright, who is black, thinks the chant should stay.

?I?m not going for it,? Wright told GatorSports.com. ?I created something for us. It?s a college football thing. It?s not a racist thing, It?s about us, the Gator Nation. And I?m Black.

?What about our history as the Gator Nation? We took a program from the top five to No. 1 in the country. I think I?ve done enough, put in the sweat and tears, to get to offer my opinion about something like this.?

Look, Lawrence, I’m a white man. I don’t deserve a voice to talk about race issues. But this seems bigger than football. If the phrase is offensive at all to anyone, why not just get rid of it? It’s just a freakin’ chant.

I think Gator fans will survive with their billion other phrases. Add another Tom Petty tribute to games if need be. But you won’t hear me yelling “Gator Bait” anymore at athletic events, especially considering it was used a racial slur about the death of black babies.

And you shouldn’t either.