Football coaches spend hours, days and weeks preparing a game plan. They eat their dinner in the film room. They go over the game script before going to bed. They forget about their kid's baseball game because they had to go see a recruit and get scolded by their wife, learning that family is the most important thing.

It's all to gain an advantage. Football is a game of inches, and any little advantage can add up to a couple of marks on the ruler.

Former Iowa coach Hayden Fry had an idea to give his team an edge: a pink visitor's locker room.

Iowa's Pink Locker Room: A Way to Get an Edge

Pink? Let's not get crazy Hayden. How could anyone withstand a pink locker room and live to tell the tale?

The Iowa head coach put his feet up on his desk. "That's the point," he said. 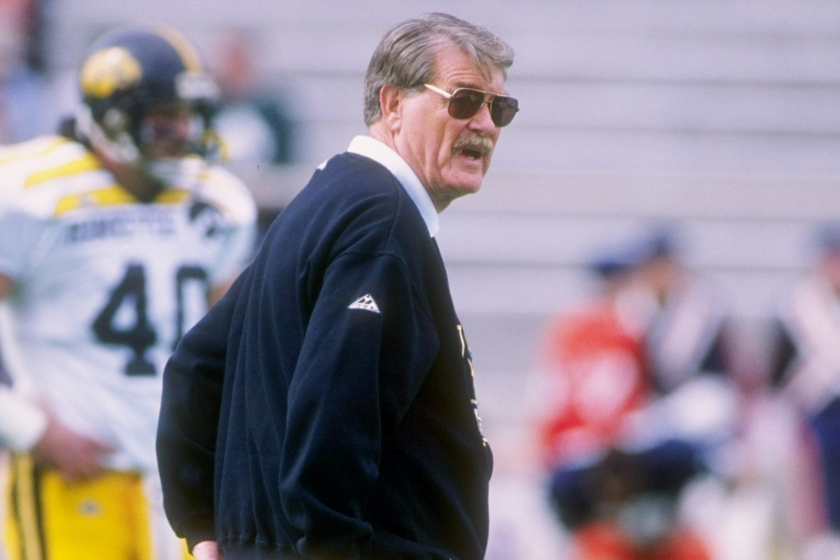 In 1979, Fry's idea came to fruition. The crew at Iowa got to work. They painted pink walls, pink lockers, pink urinals, pink sinks, pink carpet. You name it, it's pink.

Fry, who earned a psychology degree from Baylor, read that pink has a calming effect on people. In his mind, the pink locker room would soften his team's opponents and give them a psychological advantage. I last played football in 2008 so I can safely say I'm an expert of the game. Football is a game of honor of integrity. The battle is ultimately won off the field, and if you need to pull a gimmick like this, the boys on the gridiron probably don't have what it takes. But hey, what do I know. All of Iowa's national championships speak for themselves.

Fry expanded on the locker room's psychological effects in his book "A High Porch Picnic."

"When I talk to an opposing coach before a game and he mentions the pink walls, I know I've got him. I can't recall a coach who has stirred up a fuss about the color and then beat us."

Former Michigan head coach Bo Schembechler probably wasn't one of those guys. He hated the pink locker room so much that he couldn't look Fry in the eye. Schembechler went so far as to cover the walls with Michigan decorations whenever the Wolverines visited Iowa City. His efforts didn't pay off, as his teams went 2-2-1 at Kinnick. Score one for Fry.

Schmebechler's hatred carried over to the next generations of Wolverines. When Jim Harbaugh and co. visited the Hawkeyes in 2016, they followed the same procedure of decorating the walls and leaving with a loss.

This isn't to say the locker room hasn't been without controversy. The University of Iowa renovated Kinnick in 2005, including brightening up the pink locker room. A visiting law professor stated the locker room was demeaning towards women and the LGBT community. He even wrote an entire argument about it. Iowans and college football fans showed support for the tradition and the locker rooms remain as pink as ever to this day.

Iowa football's pink visitors locker room has developed into one of college football's most famous quirks. Big Ten football teams from Indiana to Minnesota to Penn State to Wisconsin are surely sick of the color pink whenever they head to Iowa City for a matchup. Iowa State Cyclones fans might hate pink more than Schembechler.

There's the famous saying about seeing red when you're angry. When you face the Iowa Hawkeyes in Iowa City, you only see pink.

MORE: The "Horns Down" Penalty Makes College Football Even Softer