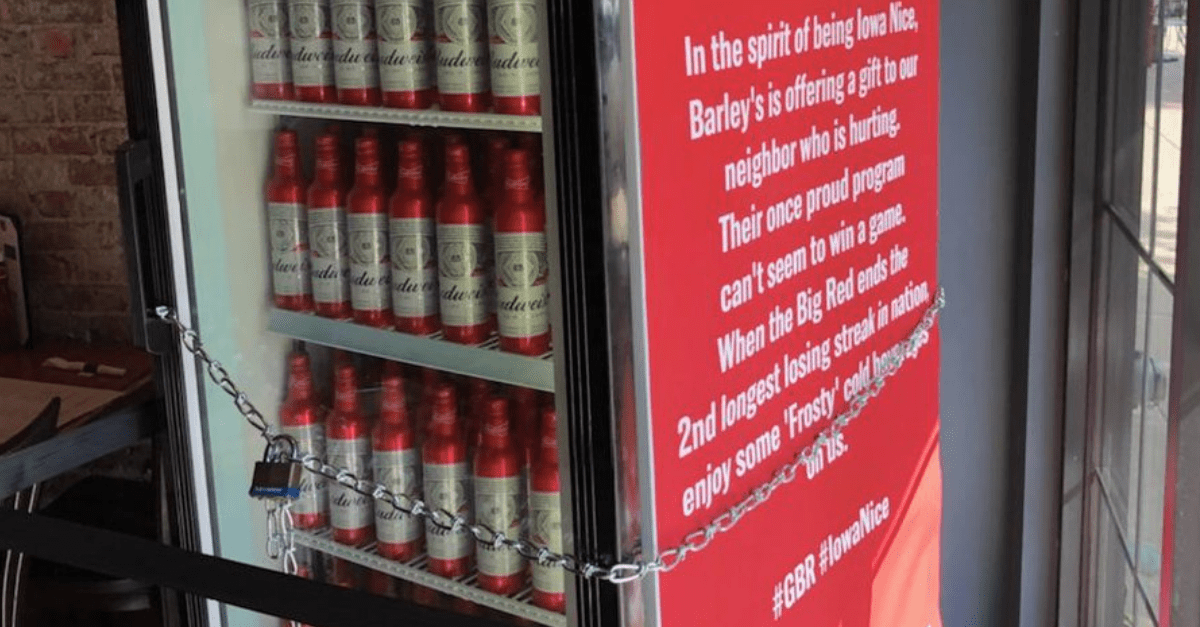 It?s bad enough when your favorite team is off to one their worst starts in history, and you know it?s rough when a fast food chain roasts your fan base on Twitter, but what happens when other team?s fans get involved? Man, those are some fighting words.

Yes, the Nebraska Cornhuskers are 0-4 and are pretty big underdogs Saturday at Wisconsin. So what does a bar owned by an Iowa Hawkeyes fan have to do with anything about that? Well, everything.

Inspired by the Bud Light-sponsored ?Victory Fridge? for Cleveland Browns fans when they finally won a regular-season game, bar owner Matt Johnson in Council Bluffs, Iowa is trolling the Nebraska faithful with some free Budweiser during this difficult time. Well, when the Cornhuskers snap their eight-game losing streak and win a game in 2018, of course.

Want to watch Big Ten Conference football? Head on over Barley?s Bar. Want to see one of the greatest troll jobs in college football right now? It?s there, too.

The fridge full of barley pops reads: ?In the spirit of being Iowa Nice, Barley?s is offering a gift to our neighbor who is hurting. Their once proud program can?t seem to win a game, When the Big Red ends the 2nd longest losing streak in nation, enjoy some ?Frosty? cold beverages on us #GBR #IowaNice.?

The custom fridge even has ?Forever Red? on it. Brilliant.

Nebraska head coach Scott Frost hasn?t even coached a full season at his alma mater, but the ?frosty? reference is already a thing with Wendy?s and Barley?s Bar both using it this month.

Nebraska fans better hope their team figures it out against the Badgers, but if they don?t they should definitely be rooting for North Texas to beat UTEP so the Miners extend their already rather dismal 17-game losing streak.

If the Browns can win a game, so can the Cornhuskers, and it?s only a matter of time before that fridge of free gets emptied by some relieved Husker fans at an Iowa bar.

READ MORE: What Happens When a Toddler Finds Your Season Ticket Money? This.