The 6 Reasons Why Ohio State Will Go Undefeated in 2018 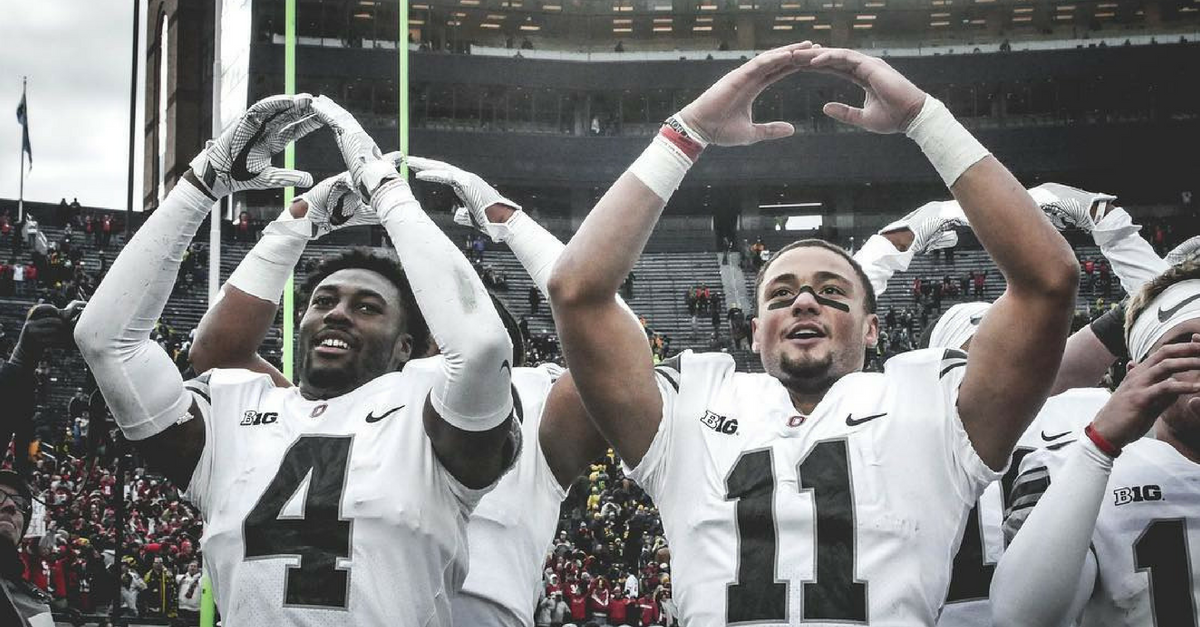 The Ohio State Buckeyes did everything they were supposed to do to earn a College Football Playoff berth in 2017. They went 12-2 and won the Big Ten Conference title, but were snubbed in favor of Alabama, who didn’t even win its own division in the SEC.

Instead, Ohio State went on to dominate USC in the Cotton Bowl.

Graduating one of the Big Ten’s best quarterbacks ever, J.T. Barrett, and watching two more first-rounders — cornerback Denzel Ward and center Billy Price — lead seven Buckeyes selections at the 2018 NFL Draft, leaves huge shoes to fill on both side of the ball.

Do you think head coach Urban Meyer is sweating? Forget about it.

?There?s zero stress, minimal stress when you have great players that are competing,? Meyer said earlier this year.

All is well in Columbus, Ohio. As Meyer’s seventh season at the helm begins, the stage is set for another run at the Big Ten title and another College Football Playoff appearance. Despite all the losses in 2017, the Buckeyes are primed for a chance to go undefeated in the regular season in 2018.

Here’s why they could do it:

Of Ohio State’s 12-game schedule, only four of them are true road games. The fifth is a matchup against TCU on Sept. 15 at a neutral site: AT&T Stadium in Arlington, Texas. Their other non-conference games include powerhouse programs like Tulane and Oregon State. Plus, they get Michigan at home in Ohio Stadium. The most difficult game on the schedule will be Sept. 29 in Happy Valley, Penn., against Penn State. It’ll be a primetime game between top-ranked teams. Don’t expect Meyer to let the Buckeyes forget what happened the last time they visited James Franklin and Penn State.

Ohio State was bounced from a CFP appearance for two reasons: their Sept. 9 loss at home to Baker Mayfield and Oklahoma, and getting their doors blown off on the road at Iowa, 55-24, when they were the No. 3 ranked team in the country. Ohio State still won the Big Ten East and handled Wisconsin in the Big Ten Championship, but that wasn’t enough to earn a playoff bid. Expect the Buckeyes to come out with a vengeance the entire 2018 season to secure their postseason spot.

WOW!!! This is how it looks when you upset the #6 team in the country!#Iowa vs #OhioState pic.twitter.com/dURGhgOAPM

Since 2004 at Utah, an Urban Meyer coached team has ranked Top 5 in the NCAA at some point in the season. Every. Single. Year. Since his days as head coach of Bowling Green, Urban Meyer’s spread offense has done damage everywhere he’s coached. Meyer, a recruiting legend, builds depth into his program at every position better than almost any coach in the country; the exception, of course, is Nick Saban. Don’t expect anything less than perfection from Ohio State in 2018. Meyer leads the charge in that regard, and you know he won’t make excuses with a cast of new players taking the field. Meyer loves Ohio, and he’s bringing the entire state with him.

Go @cavs!! Bounce back & bring it back home to Ohio @KingJames #WhateverItTakes pic.twitter.com/Zlc3oa2Myb

4. The “Next Man Up” Mentality

Despite losing two major starters on the offensive line, and numerous defensive personnel, the Buckeyes are loaded with talent waiting for their chance to step in and play. Several former five-star prospects, like defensive end Chase Young, linebacker Baron Browning and cornerbacks Jeffrey Okudah and Shaun Wade, will compete for open spots. There is four-star talent throughout the Buckeyes roster that can step in and play Week One. The benefit of not scheduling a major, playoff shifting game early in the season? Meyer and the Ohio State staff get the chance to mold and craft a rotation before Big Ten games start. And no, playing Rutgers at The Shoe the second game of the season doesn’t count.

5. A No. 2 Ranked Recruiting Class

Urban Meyer is adding the nation’s three No. 1 ranked players at their positions to his 2018 Ohio State football team; offensive tackle (Nicholas Petit-Frere), defensive tackle (Taron Vincent) and safety (Tyreke Johnson). This recruiting class, which only ranks behind Georgia, according to 247 Sports, features those three five-star recruits, and 20 four-star recruits, the most of any program. Meyer is no stranger to rotating units, keeping players fresh the entire season, and getting repetitions for everyone on his team. Expect to see a few freshmen step onto the field and make an impact this season.

Every great Urban Meyer team is built on its leaders; Alex Smith and Eric Weddle at Utah in 2004, Tim Tebow, Percy Harvin and Joe Haden at Florida in 2008, J.T. Barrett, Ezekiel Elliot, and Joey Bosa at OSU in 2014. As for 2018, Meyer has, once again, laid the foundation for another great Buckeyes roster to make a run. Nick Bosa, Joey’s younger brother, was an All-American on the defensive line in 2017, and is projected to be one of the first players selected in the 2019 NFL Draft. J.K Dobbins and Mike Weber return as a two-headed running back in the backfield, and all five of the team’s top wide receivers are back this season. Quarterback Dwayne Haskins steps in at quarterback for the Buckeyes; he was the fifth-ranked pocket passer in the country coming out of high school in 2016. Leadership? They’ve got that, too.