Some rivalries begin over the smallest of things, while others get their start from actual battles. "The Game", better known as the rivalry between the University of Michigan and Ohio State, was actually born out of each state's disdain for the other following the Toledo War. The rivalry between the Montreal Canadiens and Toronto Maple Leafs has deep seeded roots all the way back to when the French and British were fighting over territory in the mid 1700s.

Throughout college football history, there has been an uncountable number of heated rivalries, but how many can say they were started by a single t-shirt? Only this one truly can.

In 1988, the Notre Dame Fighting Irish and Miami Hurricanes were set to play one of the biggest games of the season in South Bend, Indiana, but it became even bigger when a shirt with the words "Catholics vs. Convicts" came alive.

It All Began With a T-Shirt 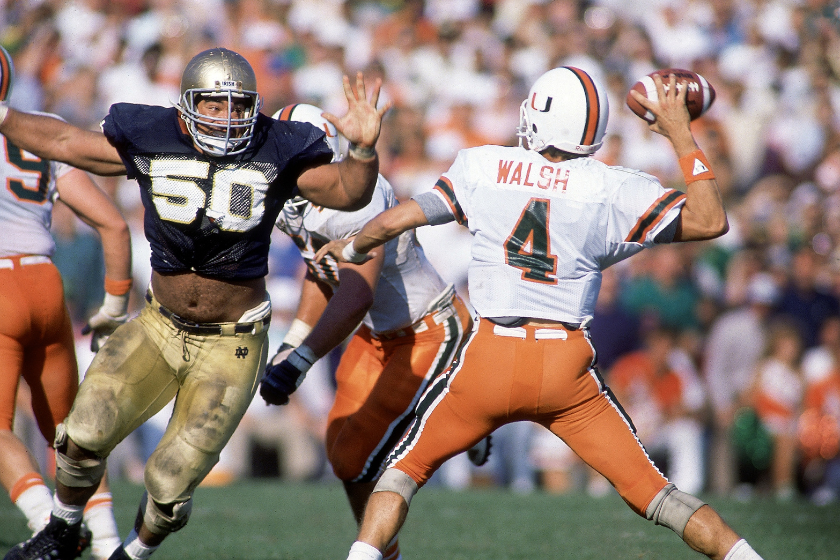 RELATED: How Much Does Miami's Turnover Chain Actually Cost?

The shirt was created by Notre Dame students, Joe Frederick and Pat Walsh, and became extremely popular among Irish fans and students. Frederick had come up with the phrase and idea, while Walsh designed the shirt.

The phrase refers to the University of Notre Dame being a Catholic school, while the University of Miami and the Hurricanes football team were, at the time, seen as "criminals" and "the bad boys of college football" due to what they called swagger.

With how popular the shirt became, which is still talked about today, it is no wonder players from The U took offense and were angered by the shirt. And over 30 years later, the 1988 Miami-Notre Dame game is still called the Catholics vs. Convicts game.

At the time, Miami football was a beast of a college football program. Entering the 1988 season as the defending-national champions and looking for its third title of the decade. The Hurricanes had beat the Irish by a combined score of 82-7 in their last two meetings, which saw the hiring of Lou Holtz between games, so there was confidence on their side. That might have been their biggest downfall in the game.

The Hurricanes turned the ball over seven times in the game, including a fumble at the goal line by Cleveland Gary. (Side Note: Gary definitely crossed the plane for a score or at least was down before the ball came loose.) Even with all of their miscues, the 'Canes found themselves down by just one point after Tony Rice had fumbled the ball.

With 45 seconds left in the game, Miami scored a touchdown to cut the Irish lead to 31-30. And since there was no overtime in 1988 college football, head coach Jimmy Johnson decided to go for the two-point conversion instead of kicking the extra point. Steve Walsh's pass to the corner of the end zone was tipped away by Irish defensive back Pat Terrell and the game was over.

Playing huge games against a team that can decide whether you have a shot for a title definitely builds hatred, but it was also between two schools that identified with absolutely opposite brands. Add the shirts commemorating the differences and mocking one team definitely bought it all to another level.

The Current State of the Rivalry 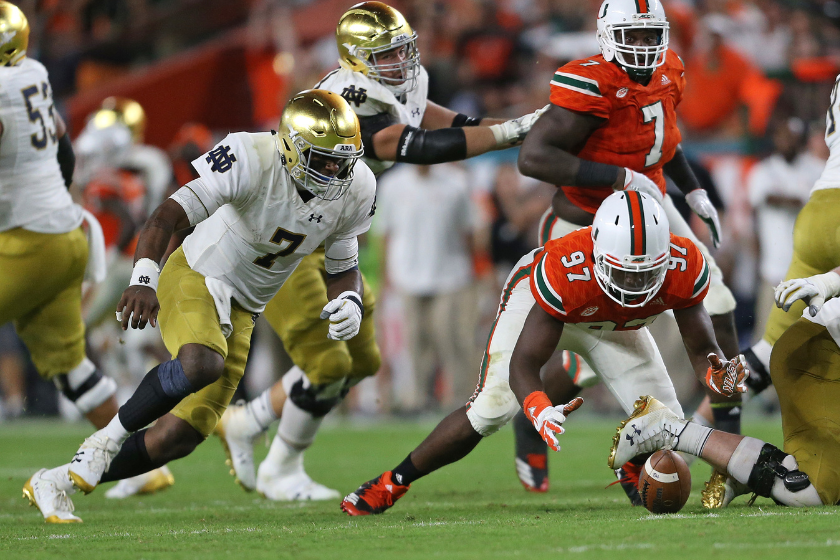 This shirt built such a big rivalry. So much so that in 2017, when the schools played as top-10 teams, it was still called Catholics vs. Convicts, and was built up as one of the biggest games of the year. When Miami won 41-8, Hurricanes fans treated it as one of the biggest wins in the past 20 years for the program due to the hate built up from their games with the Fighting Irish in the 80s.

So is the Notre Dame-Miami rivalry still going strong? Well, in recent years as Miami begins to find its footing under head coach Mario Cristobal and Notre Dame begins its post-Brian Kelly adventure, it's possible these two teams would spark a new competitive relationship. As Notre Dame falls down the rankings, and Miami begins their climb, it's very plausible that they could meet in the middle.

Not many rivalries get a documentary made by ESPN, but in 2017, the network released a "30 for 30" feature. It was directed by Notre Dame alumni Patrick Creadon and was all about the t-shirt that sparked the rivalry. It is interesting because we get a look at each sides' opinion of the shirt. Some Miami players understood why they were called the convicts and didn't care, while some were hurt by it because they were no worse than any other school.

But what the documentary fails to really do is weave the stories together in a way that makes Notre Dame student culture and the Miami football game. While the football aspect is definitely more interesting, the doc does lean a lot into the minutia of the shirts, their production and their sales, but never seems to find a smooth transition between the two. Due to the nature of giving weight to both stories equally, some viewers may be find themselves switching to "The U: Part One" instead, in order to get a fuller fix of college football.

But don't take our word for it, check it out yourself!

This article was originally published on June 26, 2019, and has been updated since.

MORE: Why the 2001 Miami Hurricanes are the Greatest NCAA Team Ever