College football stars sitting out bowl games is nothing new.

LSU running back Leonard Fournette and Stanford Swiss Army knife Christian McCaffrey broke the seal when they sat out of their respective bowl games in 2016. Since then, plenty of other players with NFL futures have chosen to forgo playing in the Meineke Car Care Bowl. Their reputations are tarnished for ruining the sanctity of college football.

I'm kidding, of course. Football is the sport you should secure your money as soon as possible. The average NFL career is 3.3 years, so any snap you play that you could be getting paid is precious. Playing in a bowl game with no stakes isn't going to do you any favors.

The College Football Playoff, however, is a different story. The stars of the four teams that make the field aren't going to sit out even if they're a projected top 10 pick. You don't let your teammates down like that -- and, frankly, it's not a great look to NFL scouts to sit out when it matters most.

Ohio State wide receiver Jaxon Smith-Njigba is sitting out, though.

Jaxon Smith-Njigba Wouldn't Help Himself By Playing in the CFP 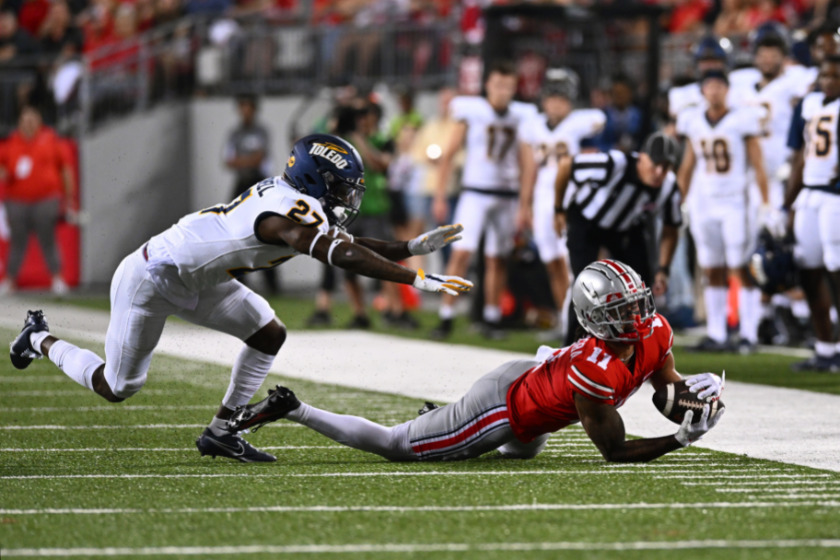 Smith-Njigba's season hasn't been what we expected after he torched Utah with 15 catches for 347 yards and three touchdowns in last year's Rose Bowl. The star wideout entered this year hailed as the best pass catcher in the country, but a lingering hamstring injury has kept him sidelined for all but three games. He hasn't seen the field since Ohio State's matchup against Iowa on Oct. 22. And he won't be seeing it again in a Buckeye uniform.

Smith-Njigba announced he'll be sitting out OSU's Peach Bowl matchup against Georgia on New Year's Eve to prepare for the 2023 NFL Draft.

"As a young kid from Texas, I've always dreamed of playing football on the biggest stage," he wrote. "It's humbling to think that I eventually did play not only on the biggest stage in college football, but also surrounded by the best group of people.

"Most of all I want to thank God for giving me strength," he said. "Leaning on Him has always been my answer, and He has not failed me yet because I know I'll come out stronger than ever.

"I've always appreciated the challenge of growing mentally and physically to be the best player and teammate possible on and off the field. Being there for my brothers means everything to me. Having the opportunity to do that these past three years has been an honor and life changing. It's something I will hold deeply in my heart forever.

"I did everything possible to put myself in a position to get back on the field multiple times this year. I wanted it as much, if not more than anyone else.

"After consulting with my doctors, it has been determined that I will not be able to participate in the playoffs. Having prayed on it with my family, I have decided to focus on getting 100% healthy and commit to my training for the next chapter in my football journey. I am officially declaring for the 2023 NFL Draft.

"My love for Columbus, Ohio and the Buckeyes is everlasting, and I'm excited to cheer them on as we make our run this year and in the years to come.

"I've got news for every prospect out there: NFL teams know," he continued. "They know what you had for lunch last Thursday. They are going to know if you are healthy or not. And if you are healthy enough to play, you need to be out there with your teammates and play.

"I'm not saying it's going to hurt his draft stock ... but the difference is with Jaxon Smith-Njigba, he is like a late first, early second rounder. He's a great college player, great slot receiver. But he has some drops, doesn't have exceptional size, doesn't have exceptional speed. There were some things coming into the year, after the great season he had, scouts were pointing to that said, 'I don't think he's a lock to go top-15, top-20.' Now the fact that he's not playing certainly isn't going to help those odds."

Smith-Njigba's father, Maada, and brother Caanan, who's an outfielder for the Pittsburgh Pirates, took to Twitter to defend Jaxon.

Being w my son yesterday for his first day of rehab and seeing his limitations for myself gave me peace w our families choice to get my son healthy. Encouraging him play would be selfish and abusive. I?m at peace bc I know he?s in the right hands 4 recovery. https://t.co/WQKZtWDF65

If he was healthy he would be playing.. like what?? We not protecting our ?Draft stock? they know who JSN is when healthy. You sorry @McShay13 and so wrong to be on tv making these false claims. ? https://t.co/og0Rg5nj3t

Damn, Dr Mcshay.. JSN got a big heart, you don?t know the man. Not to mention, don?t speak on what you don?t know. Simple. Sorry to see this. https://t.co/3s6vprxOTd

I can see where McShay is coming from, but you have to look at it from a couple of different perspectives. First, would a Smith-Njigba who's playing at less than 100% be that beneficial? The guy won't have seen real action for over two months by the time the CFP semifinal rolls around. He'll have rust. He's shown how injury-prone he is this year. Second, Smith-Njigba wouldn't be where he is today if he wasn't competitive. He'd be the first guy on the field if he was able.

All that being said, is risking a future worth millions of dollars worth a potential national championship? Probably not. And again, I understand what McShay is saying. My initial reaction was the same as his. Then I thought about it some more. The prospect of falling to the second round, as McShay said, is less of a risk than playing and potentially worsening the injury.

If you want another example of a player -- specifically a wide receiver -- sitting out in favor of the NFL Draft, look no further than Cincinnati Bengals superstar Ja'Marr Chase. The then-LSU receiver sat out the 2020 season to focus on the NFL Draft. The potential for injury, especially in a season that was riddled with COVID-19, wasn't worth it. Things have worked out for him.

I have no idea what kind of NFL player Jaxon Smith-Njigba will be. But I know no matter how special winning a national championship is, it won't put millions in his bank account.

MORE: CJ Stroud's Dad Remains in Prison, But His Mom Kim Has Been His Rock