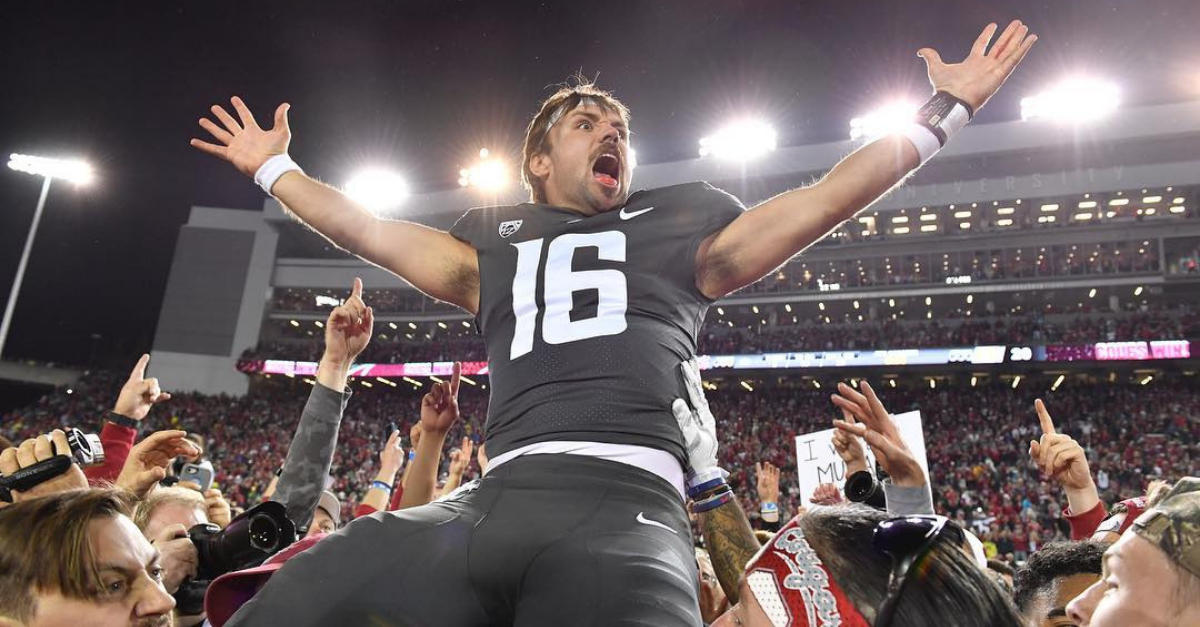 While the College Football Playoff system was meant to balance the scales of major college football, it’s done the exact opposite. Entering the fifth season using the system, there have been nine schools selected among the final four teams by the CFP Committee, and only the most elite are getting a piece of the pie.

Pending a disaster to end the season, the Alabama Crimson Tide and Clemson Tigers are likely to earn their fifth and fourth trips to the semifinals, respectively. FBS Independent Notre Dame gets in with an undefeated record because they’re Notre Dame, and brand recognition rules all.

After that, one seat is left for three conference champions to fight over? Who has a fair chance to eat when the table is already full?

With a 9-1 record, No. 8 Washington State has all the ingredients of an underdog story, and all the talent to make some noise in a national semifinal, which has had six double-digit blowouts in eight games. It’s time for Pullman, Washington to get some love and earn the committee’s attention with this resume.

The No. 1 ranked passing offense in the country averages 392.3 yards per game through the air, and is second-to-last in rushing offense (77.7 YPG), and that’s exactly how they like it. The Cougars are built to move the football on the arm of graduate transfer quarterback Gardner Minshew, and they could GASH anyone in college football with this creative, wide-open offense.

The secret sauce to the Cougars? They’re actually a well-rounded football team. They allow 324.1 yards per game on defense, which ranks 20th-best in the nation, plus they give up only 22.1 points per game. Also, redshirt freshman Travell Harris, a track star wearing football pads, is the 10th-best kickoff return man in college football (27.6 yards per return). This team travels really well, and the pressure they apply on offense means they would never be out of game.

Start in Seattle and drive five hours east to other side of the state until you think you’re lost, and hopefully you’ll run into Pullman, Washington. Washington State is a public research university founded in 1890. Notable alumni include former NFL quarterback Drew Bledsoe, the late Paul Allen, who was the co-founder of Microsoft, Jack Elway, whose son ended up being a pretty good football player, and everybody’s favorite sports dad, LaVar Ball.

Pullman has all the makings of being the “shiny new toy” of college football. Nobody’s heard of them, aside from the iconic WSU Cougars flag that waves at every single College GameDay. They’re the nation’s best kept secret in, but it all starts with their fearless leader.

No head coach in college football is more notable for his quirky style and dad-like demeanor than Cougars head coach Mike Leach. After a messy firing at Texas Tech, the offensive guru inherited a program that won nine games in the four years before he arrived. Now, they’re a Pac-12 powerhouse with one of the most prolific Air Raid offenses in all college football.

And yeah, the fact that he interviewed postgame while wearing a mustache is single-handedly the most hilarious coach interview of the year. That mustache is inspired by the unofficial mayor of Pullman, and the one-hit wonder at quarterback who deserves some Heisman Trophy hype if this Cougars run continues.

Attention Coug Fans: we need you in Martin Stadium next Saturday when we take on Arizona! #GoCougs pic.twitter.com/l9yzjZVpKt

Every legendary band has an iconic lead singer, every ship has its captain, and Washington State has Gardner Minshew. The graduate transfer from East Carolina University is the top yards man in college football this year. Minshew leads the NCAA in completions per game, passing yards and total offense, plus he’s sixth in the nation with 29 passing touchdowns.

Minshew’s 10.6 yards per completion (101st in the nation) means that he orchestrates a methodical passing game like Beethoven did Symphony No. 5. This offense runs like a well-oiled machine thanks to Minshew, and they boast a unique style that would keep elite defenses on their heels.

Oh, he also committed to play for Alabama during the spring before Washington State won him over. How’s that for your semifinal storyline?

Great nugget from Bruce I had not heard before: Wazzu QB Gardner Minshew was set to transfer to Alabama to backup Tua before Tyler Hilinski passed away. Now he and Tua might finish 1-2 for the Heisman. So cool. https://t.co/mCUY0DpXo6

Washington State has done everything asked of them this season. If they handle Arizona, beat a ranked Washington team at home, and show off their offense in the Pac-12 Championship Game, they’ll still get left out.

Somebody on the committee has to see this. Alabama and Clemson have history on their sides, but a 12-1 champion of the Pac-12, and for that matter the Big 12, deserves a shot a title. Make this thing eight teams and give us what we want: a lot of points, more mustache interviews, and a College Football Playoff title in a little place like Pullman.

READ MORE: 3 Things UCF Needs to Do to Make the College Football Playoff