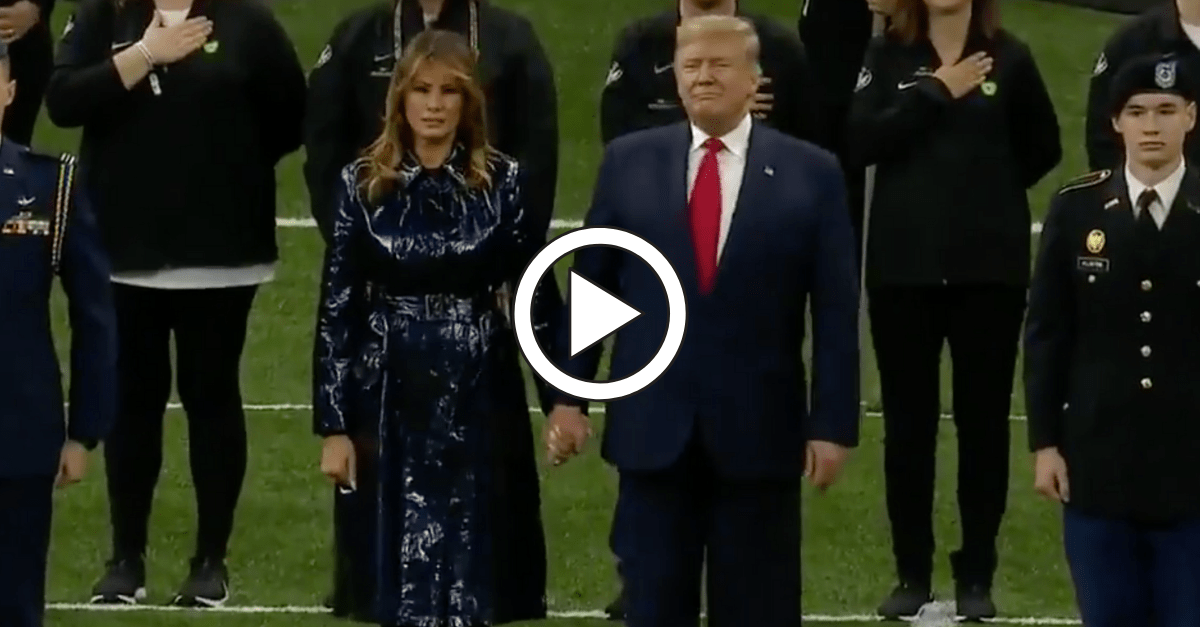 President Donald Trump is no stranger to sporting events. In fact, he?s been on a nice run of attending some of the best games across the country in recent months. From the World Series to MMA to the Army-Navy game, the POTUS hasn?t missed much and his streak continued on Monday night.

When the LSU Tigers and Clemson Tigers battled in the College Football Playoff National Championship Game on January 13, President Trump was joined by First Lady Melania Trump on the field before the big showdown at the Mercedes-Benz Superdome in New Orleans, Louisiana.

It was a very warm welcome, too.

President Donald Trump greeted with massive cheering and USA chants before the national title game between Clemson and LSU. pic.twitter.com/DWArMT1Qz5

Trump attended the LSU-Alabama SEC showdown in Tuscaloosa back in November and went to Philadelphia for the prestigious Army-Navy game for the second year in a row.

For the most part, it was a great reception. President Trump was greeted with loud cheers and a standing ovation. USA chants were even heard throughout the stadium.

However, there was a weirdly awkward moment before the national anthem of the college football national championship game.

Just before The Star-Spangled Banner, Mr. President and the First Lady were seen on the field holding hands. Then, suddenly, Melania Trump ripped her hand back.

There really isn’t much controversy here, but it’s always interesting when things like this happened. President definitely played it cool by adjusting his suit jacket before the Clemson-LSU game.

Of course, social media had a field day with a ton of tweets about it.

It'd be a shame if we kept retweeting this video to remind them of it… pic.twitter.com/Tj8ueaMYPw

If you were wondering why actor Vince Vaughn was in attendance, join the club. But that didn’t stop him from getting some tv time and a conversation with President Trump.

Whether he votes Republican or Democrat in the upcoming presidential election is irrelevant. Vince Vaughn loves America and appeared to enjoy his time with the POTUS.

LSU's Orgeron was surprised to get a congratulatory call from the President Trump after the #CFBPlayoff semifinal ahead of the #NationalChampionship: pic.twitter.com/LYrvuXsnDa

Earlier during the postseason, after LSU dominated Oklahoma in the CFP semifinal in Atlanta, Georgia, President Trump called to congratulate head coach Ed Orgeron and the Tigers.

?Yes, he called me yesterday morning. I was very honored to get a call from President Trump. He was very pleasant to talk to, very complimentary of our football team, our coaching staff, complimentary of the way the state of Louisiana has rallied around us, and was complimentary to the way we played all year and wished us good luck in the game.?

Heisman Trophy winner Joe Burrow and the rest of the Louisiana State University Tigers will be invited to the White House to meet President Trump in person very, very soon, too.