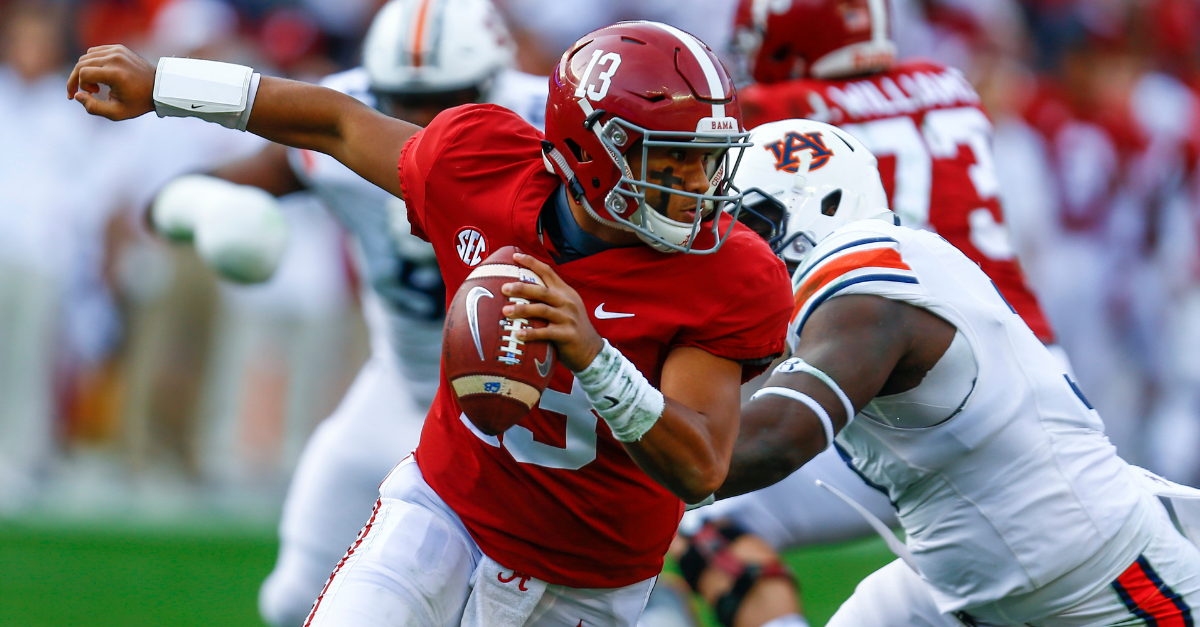 There aren’t many better fan bases than the Alabama Crimson Tide’s. In the sea of crimson and white that washes into Bryant-Denny Stadium on college football Saturdays, you can expect to find fans with crazy tattoos or fans who hate Tennessee to the core belting Dixieland Delight as loudly as possible while Alabama football throttles opposing teams.

The ‘Bama faithful have a lot to cheer about. Head coach Nick Saban runs a football factory that churns out NFL products and consistently reaches the College Football Playoff. The only other program in that same echelon as The University of Alabama is the Clemson Tigers, though they haven’t been as good for as long.

Last year looked like another national championship year before Alabama ran into a buzzsaw in Trevor Lawrence and the Tigers came away victorious. But behind Heisman Tropy hopeful quarterback Tua Tagovailoa, this year’s squad has a great shot at being the last team standing in January.

Like any season, Saban and Co. will square off against a slew of tough SEC teams in their 2019 football schedule. They’re a good bet to win the SEC Championship Game, as the SEC East falls off after Georgia and Florida (Kentucky, Missouri and South Carolina aren’t quite there yet).

The Crimson Tide haven’t lost a home game since 2015, so don’t expect the unexpected in Tuscaloosa to occur. But don’t be surprised if ‘Bama falls on the road somewhere.

This is going to be one of those NCAA games in which Alabama’s incentives to keep fans from leaving games early will apply. An SEC team hasn’t lost to an FCS team since 2015, when South Carolina fell to Citadel, 23-22.

But hey, maybe Western Carolina will match the 14 points they put up against the Crimson Tide in 2014. A team can dream, right?

A loss to one of these first two teams would rival Alabama’s home defeat to Louisiana-Monroe in 2007 for worst loss in the Saban era. New Mexico State went just 3-9 in 2018, though, so don’t count on that happening.

The 2018 Crimson Tide are the 3rd team in SEC history to score 60 points twice in conference play in a single season (1995 Florida and 1945 Alabama). pic.twitter.com/ZfXVt1PHFu

The Razorbacks didn’t win a single game against an SEC opponent last year. They even fell to Colorado State and North Texas. Alabama has won 12-straight against the Hogs dating back to 2007, too, averaging 40 points per game in that span.

Don’t overthink this one.

The Golden Eagles have posted winning seasons each of the last four years in Hattiesburg. They hung with Auburn last year before ultimately losing, 24-13. These teams have played 15 times in the last 27 years, and Southern Miss has won just one of those games.

I don’t think even Brett Favre in his prime could take down the Tide this year.

Alabama and Duke will start the 2019 season in Atlanta for the #CFAKickoff Game #RollTide https://t.co/4Ti9bvyvja pic.twitter.com/v9qq23rHjv

There’s not much to say here except that Alabama should wipe the floor with Duke to open the season in Mercedes-Benz Stadium in Atlanta, Georgia.

The Duke Blue Devils lost quarterback Daniel Jones to the first round of the NFL Draft, not that that would’ve mattered all that much anyway. This one should look similar to Alabama’s 62-13 final score beatdown in 2010, the last time these two played each other.

The Rebels lost their last five games of the season in 2018 to finish 5-7 on the year. Alabama kicked the living snot out of them, 62-7.

Ole Miss isn’t the team it was in 2015, when Chad Kelly and the 15th-ranked Rebels upset the No. 2 Tide. Unless head coach Matt Luke secretly has the next Bo Jackson on his roster, Alabama is taking this one with ease.

A mediocre 7-6 year capped by a 28-0 drubbing from Virginia in the Belk Bowl left much to be desired from Will Muschamp’s Gamecocks last year.

The two don’t have a lot of history against each other, though the last time they played in 2010, South Carolina did beat a then-No. 1 Alabama and went on to win the SEC East. Will lightning strike twice in Columbia this year?

It's the Third Saturday in October … and Tua is out here putting on a CLINIC.

The “Third Saturday in October” has produced some tremendous games throughout its history. That hasn’t exactly been the case in recent years.

Alabama has won 12 straight over the Volunteers. The last time UT escaped Tuscaloosa with a win was in 2003, winning 51-43 in an epic fifth overtime.

That was a long time ago, though. Don’t bet on Tennessee.

You’d have to go all the way back to 2007 to find the last time Mississippi State beat Alabama. The Bulldogs lost their starting quarterback in Nick Fitzgerald, so Alabama’s defense should feast on whichever inexperienced player replaces him.

Still, the Battle for Highway 82 could turn out to be an enticing one in Starkville if Bulldogs coach Joe Moorhead can scheme something up by the time Nov. 16 rolls around.

Jimbo Fisher is one college football’s great coaches and Kyle Field is no cakewalk to play in. Plus, the Aggies return an improved Kellen Mond at quarterback this season after turning in a pretty good 2018 campaign.

All that considered, Alabama should trounce TAMU the way they did last year. The only way this is a close game is if Fisher can outcoach Saban and cook up some magic in College Station. Fat chance.

LSU doesn’t nearly have the offensive firepower to keep stride with Tagovailoa and the weapons at his disposal. However, the Tigers’ always-stout defense can give them a chance in any game, and a couple mistakes on Tagovailoa’s end could keep LSU in this one.

The bottom line here is that LSU hasn’t beaten Alabama since 2011, squeaking out a 9-6 victory in Death Valley. Ed Orgeron’s squad probably isn’t good enough to get it done this year (‘Bama squashed them, 29-0, in Baton Rouge last year), but watch out in 2020 when Alabama must replace its star signal caller.

Ahh, the Iron Bowl. It’s where rankings, statistics and recruiting stars are thrown out the window and two fierce rivals go head-to-head to claim the state.

I don’t even care where the Tigers were ranked at 2018’s end or that LSU finished No. 6. Anything can happen when these teams take the field (see: 2013 Kick Six), and because it’s in Auburn it’s by far Alabama’s most difficult game.

Since the beginning of the 2016 season, Alabama has three losses. Two of those are to Clemson. The other? The Auburn Tigers in 2017. All was not lost, though, as the Crimson Tide went on to win the CFP Championship anyway that season.

READ MORE: Alabama Has More Postseason Wins in Atlanta Than the Falcons