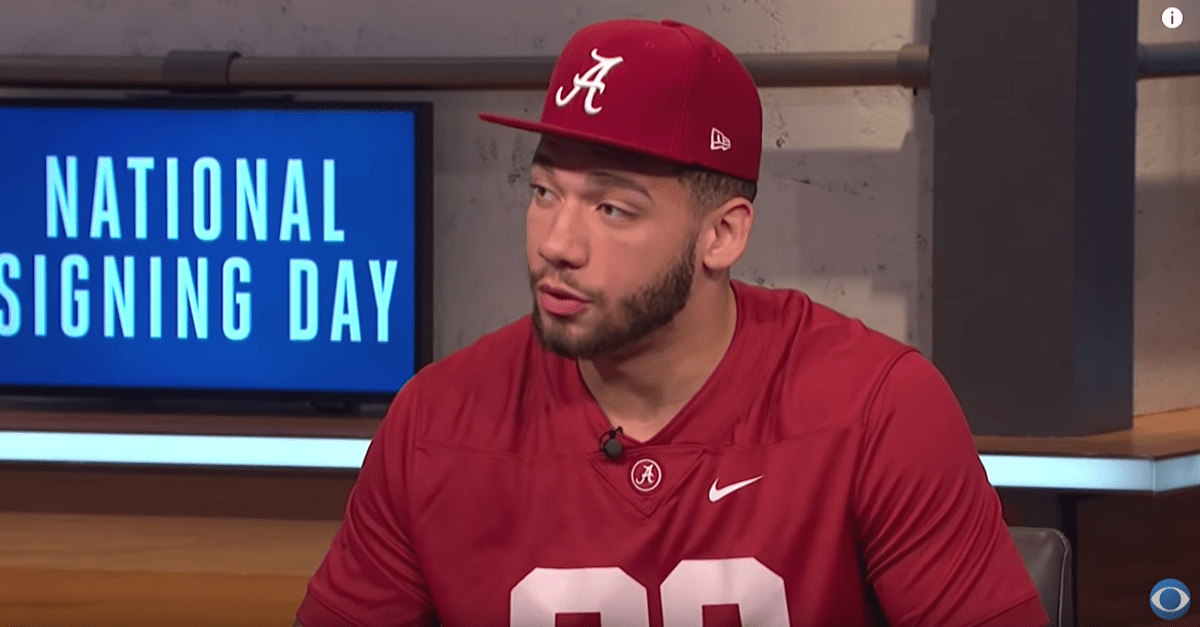 Coming out of Colonia High School in New Jersey, defensive lineman Antonio Alfano was the No. 1 overall prospect in America, according to 247Sports. The highly-touted All-American seemed like another Alabama star-turned-NFL Draft pick when his time came, but the 285-pounder has yet to showcase his skills in college football. The roller coaster ride that was his first few months in Tuscaloosa just took another unexpected turn.

Alfano was named First-Team All-State his senior season after 76 tackles, including 10 sacks, and six forced fumbles. He enrolled early at the University of Alabama and immediately showcased why he earned the No. 1 ranking nationally: Alfano racked up two sacks in the Crimson Tide’s A-Day spring game.

In mid-August, head coach Nick Saban said during his press conference that Alfano missed three practices during the week due to personal reasons. Those absences forced Alabama’s No. 1 recruit to watch from the sidelines for the Tide’s first victory over the Duke Blue Devils. The following week, the defensive end missed practice, then again, did not play in the team’s home-opening win over New Mexico State. Saban said Alfano was “going through some discipline things with me” that related to academics.

After another week, Saban said Alfano “disappeared a little bit” from the team. That set social media on fire wondering what was going on with Alabama’s five-star freshman.

Saban’s answer about the absence of fr. DL Antonio Alfano: “He’s kind of disappeared a little bit. … I think you compound the problem when you don’t confront the mistakes that you make & you create greater consequences for yourself because of the choices & decisions you make.” pic.twitter.com/l3QwnZAdRU

Finally, we arrive on Friday morning of September 13.

On social media, Alfano’s parents used their joint Twitter account to speak on their son’s behalf. The couple used several tweets to explain Alfano’s recent absences from the Alabama football program, as well as saying that he entered the NCAA Transfer Portal and will explore his options, all due to his grandmother’s health.

I’ve received many messages from the media regarding Antonio. It’s too bad that most of the media only reach out when there’s potentially bad or negative news.

I’m confident my following response will answer all of your questions:

“Antonio?s grandmother recently fell very ill and is still fighting on life support. He is very close with her. Since this illness took effect, Antonio has taken it very hard. He has not attended classes and practices.

“The University of Alabama has been extremely supportive and I couldn?t ask for better support from them. Yesterday, Antonio asked to be placed in the transfer portal to see what his options are.

There’s so much to unpack here, but one thing is clear: Antonio Alfano is not ready to play college football right now. Whatever is going on behind the scenes is far more important than helping win football games. If Alfano does decide to transfer, he could really go anywhere he wants. After all, he held offers from basically every program in the country.

UPDATE: After missing Alabama’s 47-23 win over the South Carolina Gamecocks, Nick Saban explained that he believes Antonio Alfano “basically quit” on the program despite counseling appointments being set up for him.

Saban on Antonio Alfano: “I just know the guy basically quit. He quit going to class, he quit coming here (the football building).”

Saban said counseling and other measures were set up for him (and still available), but Alfano has yet to respond to anything.

This is a strong statement about an 18-year-old kid. But Saban is never afraid to speak his mind, and in Antonio Alfano’s case, the five-star recruit gets the same treatment.

This post was originally published September 13, 2019. It’s been updated with Nick Saban’s press conference quotes about Alfano, as well as news that Alfano entered the NCAA Transfer Portal in an attempt to leave the program.