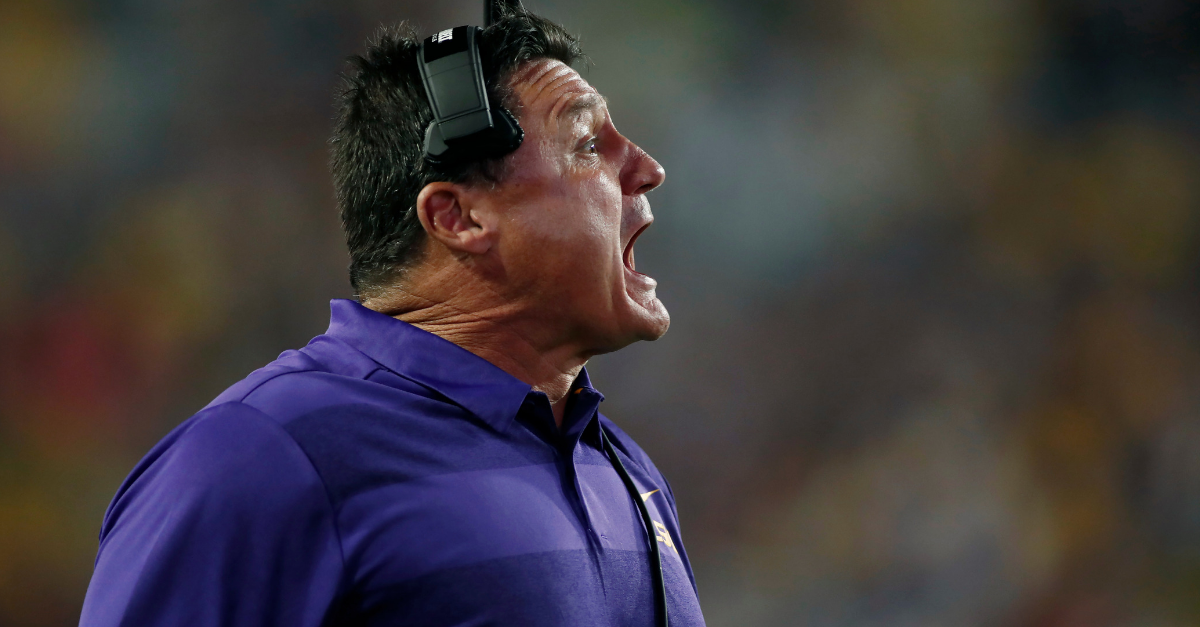 The clash between the No. 4 LSU Tigers and No. 1 Alabama Crimson Tide is the most anticipated game not only in the Southeastern Conference, but perhaps in all of college football leading up to the end of the season. Both teams have plenty riding on this game, but one head coach just can’t seem to stoke the fire enough.

LSU head coach Ed Orgeron is using sneaky voodoo leading up to the game on Saturday in Baton Rouge, Louisiana and during his Monday press conference, Orgeron decided to poke the bear over in Tuscaloosa, and he might have started something his team can’t back up, even at Tiger Stadium.

Nick Saban’s Alabama team is a two-touchdown favorite over LSU on the road, which is warranted by every metric to explain the Tide’s season so far. Alabama brings a defense that allows about 20 fewer yards than LSU per game, both defenses give up around 15 points per game, but the Crimson Tide bring a far superior offense into the game that ranks first in scoring offense (54.1 PPG) and second in total offense (564.3 YPG).

So, what is Ed Orgeron‘s game plan heading into Saturday? Is Coach O planning on “throwing the kitchen sink” at Alabama?

His answer is short, sweet and music to the ears of the Alabama Crimson Tide.

Orgeron explained that while this game is huge for the program and the entire state of Louisiana, there isn’t going to be a different approach in preparation leading up to game day.

“When it comes down to game time, there’s going to be an excitement in the air that’s going to be different for this game,” Orgeron said. “This just happens this way. That’s how it is LSU versus Alabama. There’s nothing I need to say or do this week to get these guys fired up.”

The LSU Tigers might be 7-1. They might have four AP Top 25 wins so far in 2018. They might even have more than a few All-Americans on their team when the season is over.

But to go out and start guaranteeing wins in a rivalry that Louisiana State University hasn’t won in the last seven games? It’s a bold move by an outspoken head coach, but this one could come back to bite Orgeron in a big way when the mighty Crimson Tide roll into Death Valley.