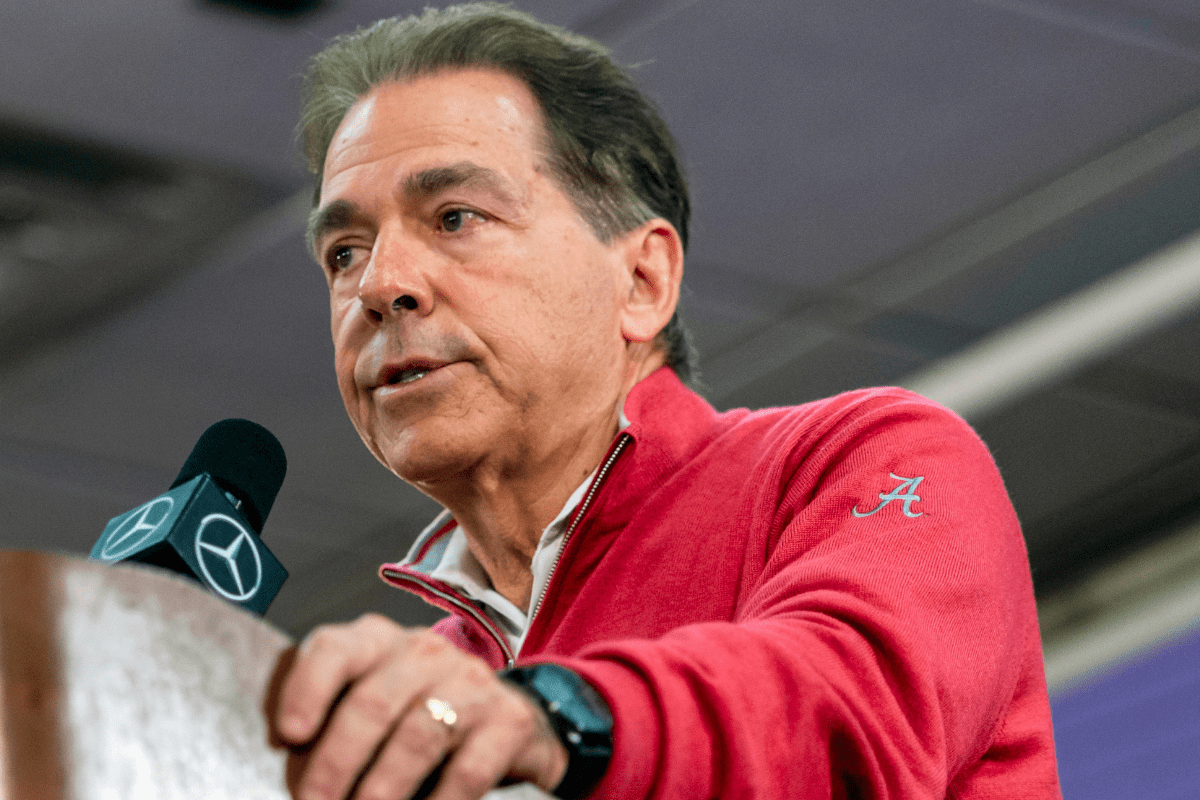 No one can ever tell Alabama head coach Nick Saban how to do his job. In 25 years on the sidelines in college football, he’s won six national championships and an astounding 253 games. Saban not only built the dynasty in Tuscaloosa but he’s also maintained it over the last decade.

That being said, Saban has gained a reputation outside of his SEC school that he’s robotic. That he has no emotions or at least doesn’t show them. Lane Kiffin made that clear when he imitated him on a radio show once. Some might even say he cares more about winning national titles than he cares about the health of his players.

In the Alabama Crimson Tide‘s 48-17 win over the Tennessee Volunteers in Knoxville’s Neyland Stadium, Saban spoke about a serious injury to a star player, and social media ripped him for what he said.

Sending positive vibes to Jaylen Waddle. One of the best players in the nation. Hope this isn't a long term injury. pic.twitter.com/yiE2jWhmMW

The story of the game happened on the opening kickoff. Alabama wide receiver Jaylen Waddle, who is also a potent kick and punt returner, received the kick deep in the end zone.

Waddle was tackled by Tennessee defensive back Kenneth George Jr., whose body rolled on top of Waddle’s right ankle. Waddle was instantly in pain and couldn’t put pressure on the leg because of the ankle injury.

Toward the end of the first quarter, Waddle was spotted exiting the locker room and leaving the stadium in the back of an ambulance. It was clear that the 2021 NFL Draft first-round hopeful had suffered an injury way more serious than a sprain.

Nick Saban tells @JamieErdahl that Jaylen Waddle will be out for the year after injury vs. Tennessee. pic.twitter.com/HYcExcqayo

RELATED: Jake Coker Won a National Title for Alabama Athletics, But Where is He Today?

Here’s what Nick Saban said when asked about Waddle’s injury at halftime:

“He’s out. He’s out. He’s out for the year, and it’s a shame because the guy is a great player. It’s exciting for college football to see a guy play like that. I hate it that he gets hurt on a play like that. You’re not supposed to bring a ball out when you’re that deep in the end zone. But he’s a great player so you got to let him use his judgement.”

Many fans and media members took to social media to call out the part where Saban points out that Waddle was “not supposed to bring a ball out when you’re that deep.”

To be honest, I don’t think Saban was conveying a lack of remorse. I think he was providing context on the play and explaining that you hate to have an injury occur when it could’ve and should’ve been prevented. Also, you can’t blame Waddle for a freak injury that sidelines him for the rest of the season.

Seeing people on here saying my dad doesn’t care about JW and his players when they’re hurt is really disappointing. His body language and tone is hard to read, but he is absolutely devastated. He’s just as sad and upset as the rest of us.

And the fact that I have to come on here and remind people this, is ridiculous. He treats his players like his sons. I know it and you know it.

Nick Saban’s daughter, Kristen Saban Setas, took to Twitter to defend her father from critics accusing him of not caring about his players after Saturday’s game.

“Seeing people on here saying my dad doesn’t care about JW and his players when they’re hurt is really disappointing. His body language and tone is hard to read, but he is absolutely devastated. He’s just as sad and upset as the rest of us,” she wrote.

“And the fact that I have to come on here and remind people this, is ridiculous,” she added. “He treats his players like his sons. I know it and you know it.”

Oh yeah, she went there.

To go so far as to say Alabama coach Nick Saban doesn’t care about his players is a bit ridiculous. Saying his comment may have been a bit tone deaf? Sure. But let’s recall Saban’s response to Tua Tagovailoa’s hip injury:

Does that sound like someone who doesn’t care about his players? You be the judge.

Waddle was not only one of ‘Bama’s top receivers, but his 557 receiving yards on 25 receptions and four touchdowns were near the top of the NCAA leaderboards. The 2019 SEC Special Teams Player of the Year was filled in for by Slade Bolden, but you just can’t replace a guy like Waddle.

Alabama football will have to turn to running back Najee Harris, and wide receivers Devonta Smith and John Metchie more under quarterback Mac Jones if the Tide wants to win the SEC (likely against Georgia) and head back to the College Football Playoff against the likes of Clemson, Ohio State and anyone else.

Waddle’s outlook reportedly already looks good on his high-ankle sprain and fracture, so hopefully he returns to 100 percent.