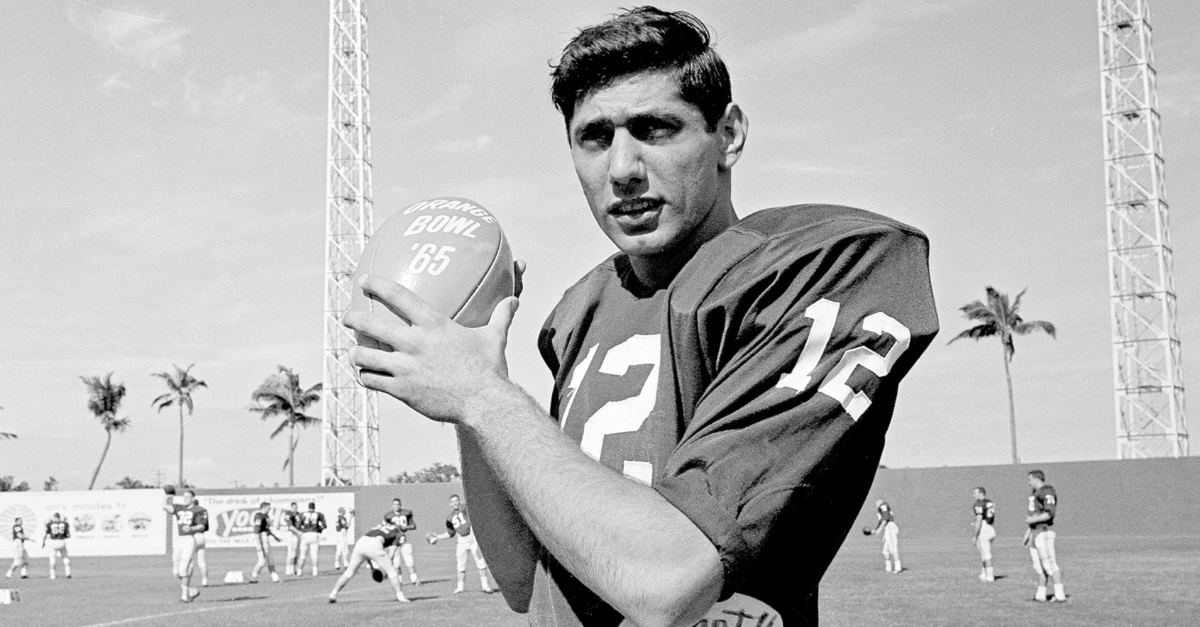 Joe Namath will always be “Broadway Joe.” The former quarterback received his iconic nickname when he was playing for the New York Jets because he could grace the cover of magazines, pull off a fur coat (or a pair of pantyhose) on the sidelines and flat out win over anyone in his presence.

The Super Bowl champion’s rise to stardom began in Tuscaloosa, Alabama, where he threw touchdown passes for the University of Alabama Crimson Tide in the 1960s. Namath led the Tide to a national championship in 1964 under legendary head coach Paul “Bear” Bryant.

Namath nearly didn’t attend the SEC school, though. He originally wanted to attend Notre Dame but found out they didn’t have female students. He settled on the University of Maryland but didn’t have the test scores to get in. So the kid from Beaver Falls, Pennsylvania, packed his bags and headed south to play college football in the Yellowhammer State.

It was at Alabama that he received a nickname completely different than “Broadway Joe” or “Joe Willie.” It most certainly wouldn’t fly today.

RELATED: Paul Bryant Fought a Bear For $1 to Earn His Nickname

Former Alabama quarterback Joe Namath told the story of how his jarring and gross nickname came to be in a 1969 interview with Playboy Magazine.

“In my freshman year, I was sitting in my room doing something and one of the fellas picked up a picture of the Beaver Falls High School football queen and her court. My girl at the time was the football queen and the crown bearer was a black girl. The guy asked, “Hey Joe, is this your girl?” and I answered yes, thinking he was pointing at the queen. But he was pointing at the black girl. He said, “Oh, yeah?” and ran out and told everybody he could find that I was dating a black girl; so they started calling me [N-word]. I had a lot of bad times in the beginning, but it all changed. They got to respect the way I felt and I think I might even have turned some of them around on a few things. In my senior year, they voted me captain of the team; and when I think about it?about me mixed in with a bunch of guys from Alabama, Tennessee, Mississippi, Georgia, Florida?I consider it a very high honor,”

Namath explained that life in Alabama was a completely different world from where he grew up. He and his family lived in the low-income part of Beaver Falls, a city just outside Pittsburgh, which was mostly a black neighborhood. He said he grew up with black friends and was the only white kid starting on his high school basketball team.

Moving to Alabama was not only eye-opening for him but many things didn’t sit right with him.

“When I got to the University of Alabama?wow! Coming from where I came from, I couldn’t believe it. Water fountains for whites were painted white; there were different bathrooms for whites and blacks; blacks had to sit in the backs of buses and whites had to sit up front. I just couldn’t understand it,” he told Playboy Magazine.

Joe Namath and his Alabama teammates around 1964. Namath played at Bama under Bear Bryant from 1962-64, compiling an impressive 29-4 record during those years @AlabamaFTBL pic.twitter.com/Lp27JYznpM

To better understand what was going on when Namath received the nickname, you have to understand the times.

Namath actually enrolled at Alabama the year before George Wallace, then governor of Alabama, stood in the schoolhouse door at Alabama’s Foster Auditorium to stop the desegregation of schools on June 11, 1963. President John F. Kennedy issued an executive order, and Vivian Malone and James Hood became the first black students to enroll at the university.

Pennsylvania, where Namath was from, desegregated schools in 1880. Let’s face it: Alabama was not as progressive as northern states by any means.

Nonetheless, Namath thrived in college. He played his way into the AFL’s first overall pick in 1965 by the New York Jets. He and the AFL’s Jets won Super Bowl III over the NFL’s Baltimore Colts and proved at a young age that he was a born winner.

There are plenty more stories in that interview you should definitely check out. The Pro Football Hall of Fame member has quite the life story, and this nickname detail is by far one of the strangest of all.