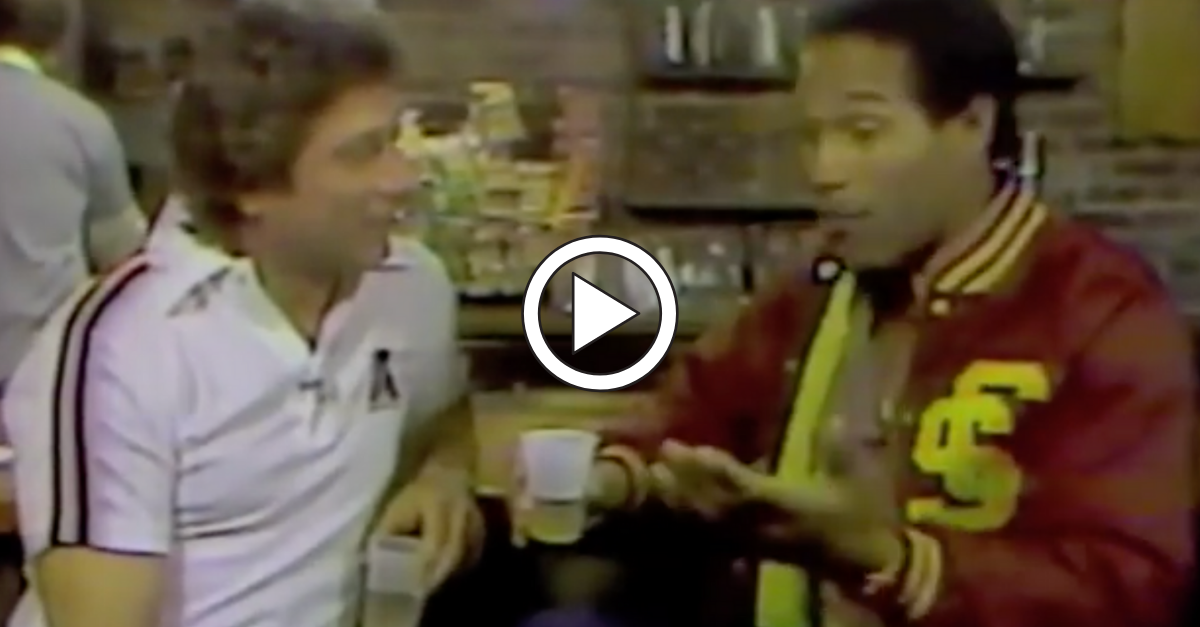 Joe Namath and O.J. Simpson were two of the biggest football stars of the 1970s. One was nicknamed ‘Broadway Joe’ and actually starred on broadway, while the other carved out a career in Hollywood. One won a national championship at Alabama, while the other won a Heisman Trophy at the University of Southern California.

For all the two superstars accomplished in the NFL, their most impressive feat in competition came nowhere near the gridiron. In fact, it involved the two of them coaching against each other…in a beer-chugging competition…that includes a cameo from Bruce Jenner. Talk about a throwback.

Back in 1980, the two Pro Football Hall of Fame members got together to coach a college beer-chugging competition at Lee’s Tomb bar in Tuscaloosa, Alabama.

Alabama and USC had been battling each other out for the “Who’s No. 1?” claim that past two seasons, so the retired Namath and Simpson decided they’d settle it the old-fashioned way.

Of course, they trash talked each other like no tomorrow.

“Sometimes I think you’ve been sacked too many times. I mean, we’re talking about USC,” Simpson says while sitting at the bar. “You guys don’t have a chance.”

“Size, power, speed? It sounds like you’re talking about Alabama,” Namath responds. “That’s what this thing is all about by the way. Speed and quickness.”

The Trojans came out victorious over the Crimson Tide, which is comical considering Alabama had a guy named “Broox” on it team. Plus, there’s no way in hell a team from the SEC accustomed to downing brews at tailgates would lose to a bunch of martini-sipping Pac-12 fans.

I guess everyone won, though, because they probably were drunk by the end of that.

Next we need Nick Saban going head-to-head with Ed Orgeron or Dan Mullen going shot-for-shot with Kirby Smart. Something tells me Orgeron might take the cake there.

This post was originally published on September 3, 2016, but this classic clip should never be forgotten.