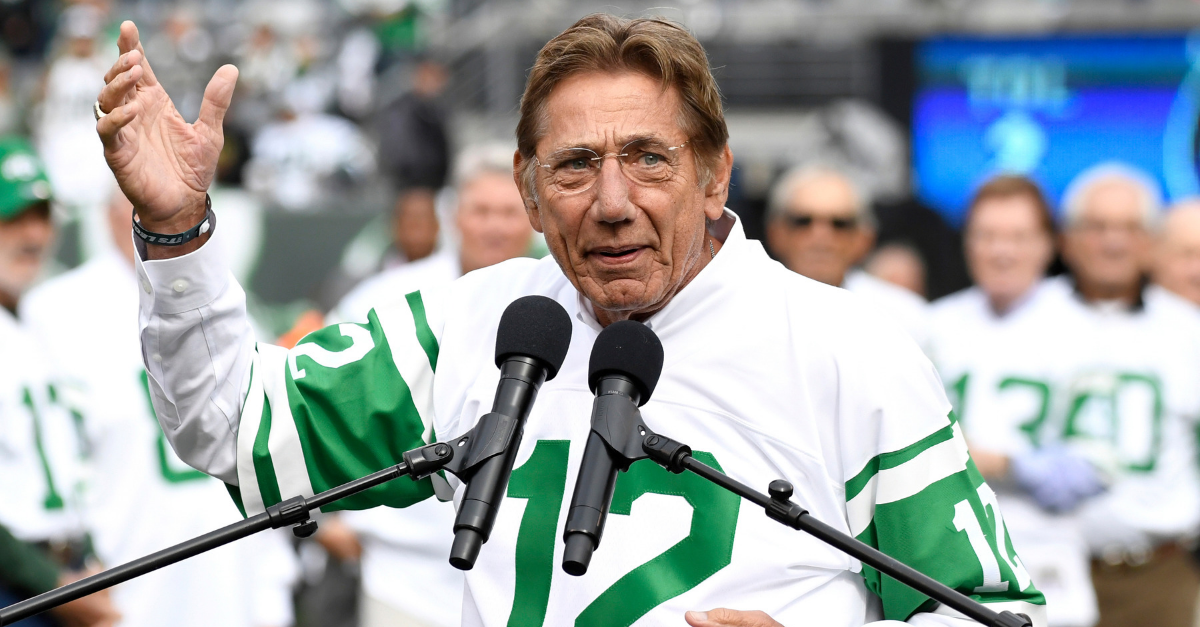 Few football players who have ever lived were quite as polarizing as Pro Football Hall of Fame quarterback Joe Namath. From his days playing for Bear Bryant at the University of Alabama to “The Guarantee” before winning Super Bowl III, and even today, “Broadway Joe” transcends time as one of the truly great personalities on and off the football field.

As Namath explained in his book titled “All the Way: My Life in Four Quarters,” stardom and fame didn’t come without its own set of very-human risks and struggles. In fact, Namath’s own vices nearly killed him after his playing days were over.

After his time as a superstar QB for the New York Jets ended, Namath’s post-playing days weren’t all sunshine and rainbows. A divorce from his ex-wife, Deborah, was incredibly hard on him. It was so bad, that Namath eventually turned to the bottle.

“Health-wise, I’d probably be dead by now if I hadn’t stopped drinking,” Namath wrote in his book.

“The drinking was what would kick my butt for a long time,” he says. “I believe any of us can be brought to our knees whether from physical or emotional pain. Over the years, I learned how fragile we humans can be. Emotionally, I used (the divorce) as an excuse to start drinking again. … I would drink all day sometimes.”

Namath’s turning point, as he says, was an infamous 2003 interview with ESPN’s Suzy Kolber. During a sideline interview, Namath was visibly drunk, slurring his words, and even said to Kolber, “I want to kiss you right now.”

“I saw it as a blessing in disguise. I had embarrassed my friends and family and could not escape that feeling. I haven’t had a drink since. … That shame is where I found my strength to deal with the addiction. With the help of my recovery, I learned that I had used my divorce as an excuse to go back to drinking. That knowledge made me a stronger individual.”

? Joe Namath, from All the Way: My Life in Four Quarters

Namath, who turned 77 years old in May 2020, is a living legend. At Alabama, Namath posted a 29-4 record as the Tide’s starting quarterback for three seasons and won the 1964 national championship. He was drafted in the first round in both the AFL (No. 1 overall) and NFL Draft (No. 12 overall) in 1965.

In 1969, the New York Jets, facing Don Shula and the undefeated Baltimore Colts, were massive underdogs. Namath, as usual, wasn’t fazed by the publicity behind the game, and he made the boldest prediction in NFL history.

“We’re going to win the game,” Namath said. “I guarantee it.”

New York won Super Bowl III by the final score of 16-7 as Namath was named Super Bowl MVP. “Broadway Joe” never won another Super Bowl and would play until his final season in 1977 with the Los Angeles Rams.

You can get your own hardcover or digital copy of NFL icon’s new book, published by Little, Brown and Company, and read about the life of an NFL legend right here on Amazon.

The two-time American Football League MVP is one of the most famous athletes of all time. His charismatic personality and Hollywood energy make him an icon for so many, and even though the 50th anniversary of his legendary Super Bowl is upon us in 2019, his legacy outside of professional football remains as great as ever.

Namath’s autobiography is the perfect look inside the mind of a legend.

This article was originally published May 7, 2019.