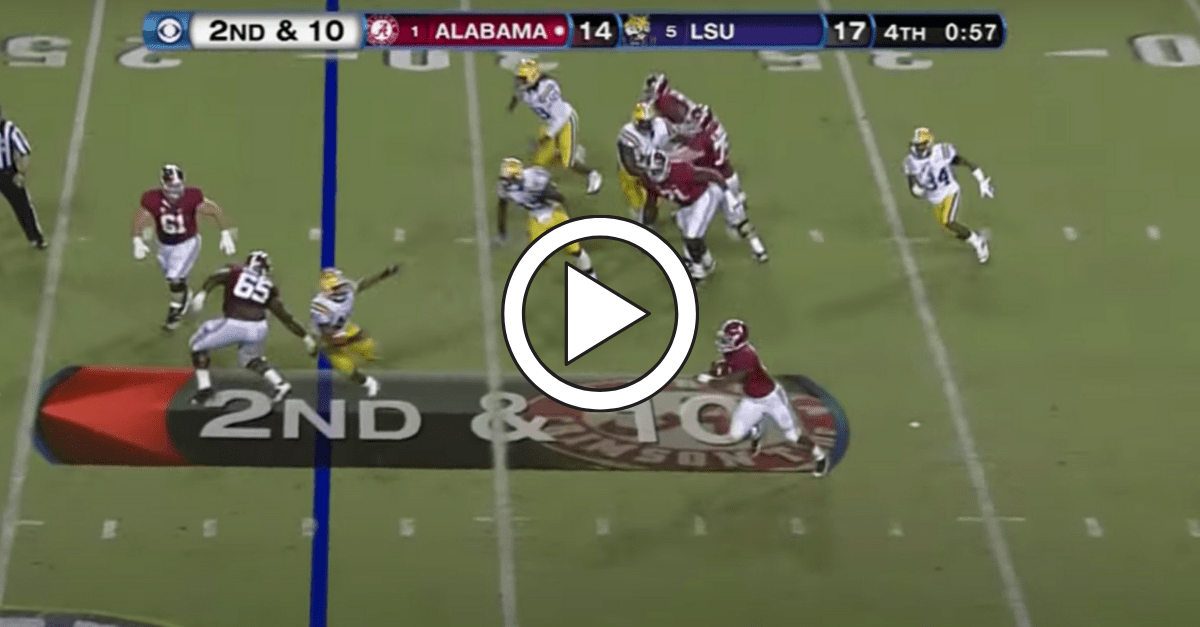 Road wins in college football are truly magical. There?s something about breaking your opponent?s heart at their stadium that never gets old. Nobody does it more than the Alabama Crimson Tide and there?s one play in particular that was rather devastating to the LSU Tigers.

Back in November 2012, the Tigers were still upset over the Crimson Tide winning the BCS National Championship Game in New Orleans. They wanted revenge, and the SEC rematch happened to be at Tiger Stadium in Baton Rouge.

Then, just when it looked like they were going to win, Alabama true freshman T.J. Yeldon stunned everyone in Death Valley with a 28-yard touchdown with under a minute to play.

Late in the fourth quarter on CBS, Alabama had its back against the wall. The Crimson Tide were down by three, on the road against a top-5 LSU team, and had 72 yards to march down the field to either set up a field goal or score a game-winning touchdown.

Luckily, head coach Nick Saban was on the sideline and Alabama had quarterback AJ McCarron, wide receiver Kevin Norwood and running back T.J. Yeldon to make it happen.

After three-straight completions to Norwood, Alabama was down to the LSU 28-yard line with exactly one minute to play and no timeouts left. McCarron?s next pass to Norwood fell incomplete, but the next play will live in Crimson Tide lore.

LSU head coach Les Miles decided to blitz on second down, but McCarron quickly found Yeldon on a screen pass. The running back then embarrassed a few Tigers defenders on his way to the end zone.

The drive was complete. Alabama football escaped with a 21-17 victory.

Alabama vs. LSU is always a high-profile NCAA matchup, whether it?s in Tuscaloosa or Baton Rouge. The amount of NFL talent that?s on the field is always amazing. This game, however, was particularly entertaining.

Behind running back Eddie Lacy, Alabama raced out to a strong 14-3 halftime lead. LSU quarterback Zach Mettenberger and running back Jeremy Hill responded with a great second half comeback.

The final drive by Alabama sealed it, though. They won the tough road test, the SEC Championship, and defeated Notre Dame to win back-to-back national titles. Perhaps none of that happens without the screen pass touchdown by Yeldon.