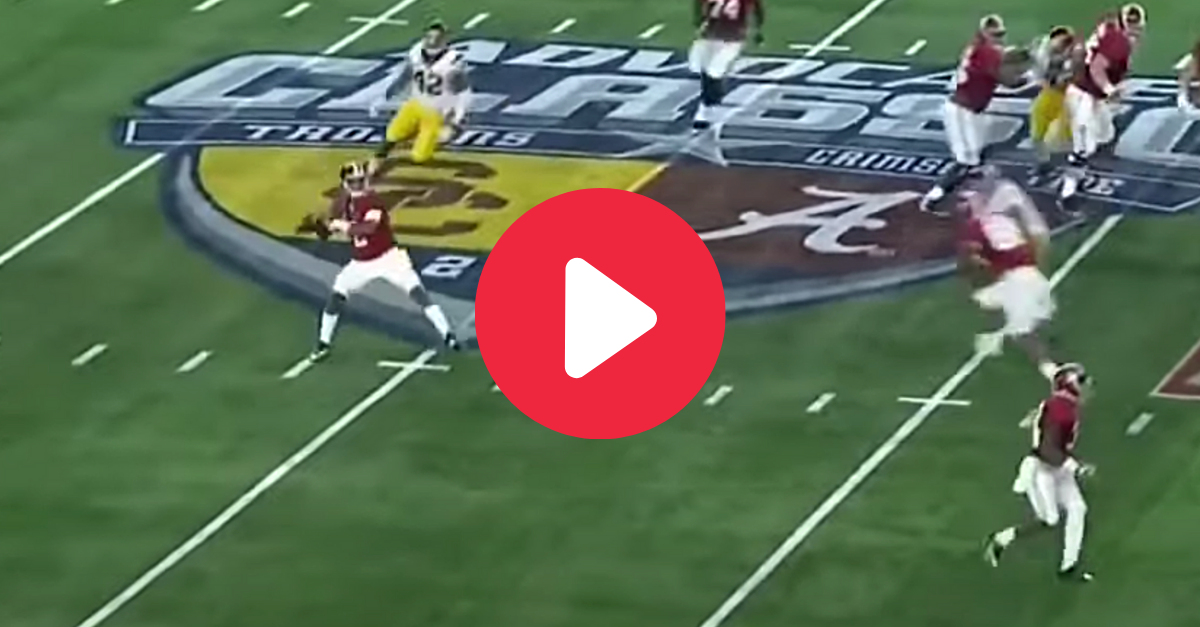 Jalen Hurts‘ freshman season at Alabama was mystifying. The four-star dual-threat quarterback came to Tuscaloosa from Channelview, Texas, and immediately set the Alabama Crimson Tide single-season total touchdown record for a quarterback in 2016 while navigating them to the College Football Playoff National Championship game against the Clemson Tigers.

Alabama and the rest of SEC fans know how Hurts’ time under Nick Saban went. Tua Tagovailoa saved his butt in the following national title game against Georgia and ultimately won the starting job before Hurts then relieved the left-hander in the 2018 SEC Championship game. Hurts played his final season with the Oklahoma Sooners, with whom he damn near won the Heisman Trophy with.

Hurts finished his incredible NCAA career with 101 total touchdowns — 80 touchdown passes, 20 rushing and one receiving. His very first score in the crimson uniform was an absolute laser.

Sure, Alabama’s 2016 campaign ended in agony. But that’s not how it began.

The No. 1 Crimson Tide took on the No. 20 USC Trojans in a much-anticipated season opener where the Dallas Cowboys play in AT&T Stadium in Arlington, Texas on ABC. ‘Bama kicked the living crap out of head coach Clay Helton’s squad, 52-6.

Alabama fell behind 3-0 after Southern California kicker Matt Boermeester’s field goal and failed to score in the first quarter.

Then, Jalen Hurts turned up the heat. On 3rd-and-13 from USC’s 39-yard line, the freshman quarterback rolled to his right and uncorked a beauty of a pass into the end zone for ArDarius Stewart for an incredible 39-yard touchdown that flew some 55 yards in the air.

Saban, who originally started Blake Barnett, quickly opted for the athletic Hurts and it paid dividends. He threw for another touchdown (and one interception) and added two rushing touchdowns, giving him four total.

?We wanted both [Hurts and Barnett] to play in the game,? Saban told reporters after the game. ?And when the first quarter was over, I was wondering to myself, ?Was this a good plan or a bad plan?? Both guys were a little shaky in the beginning. But I think Jalen, each series that he played, got more and more comfortable. He adds a dimension with his athleticism and his ability to run that I think is very effective, and I think that that actually opened up the running game.?

I’d say it was the right decision. Hurts led them to 14 straight wins, including ranked opponents like Ole Miss, Arkansas, Tennessee, Texas A&M, LSU, Auburn, Florida and Washington before falling short to Clemson for the national title.

Hurts was drafted by the Philadelphia Eagles in the second round of the 2020 NFL Draft. Hopefully, his first touchdown in the NFL looks something like his first college one.