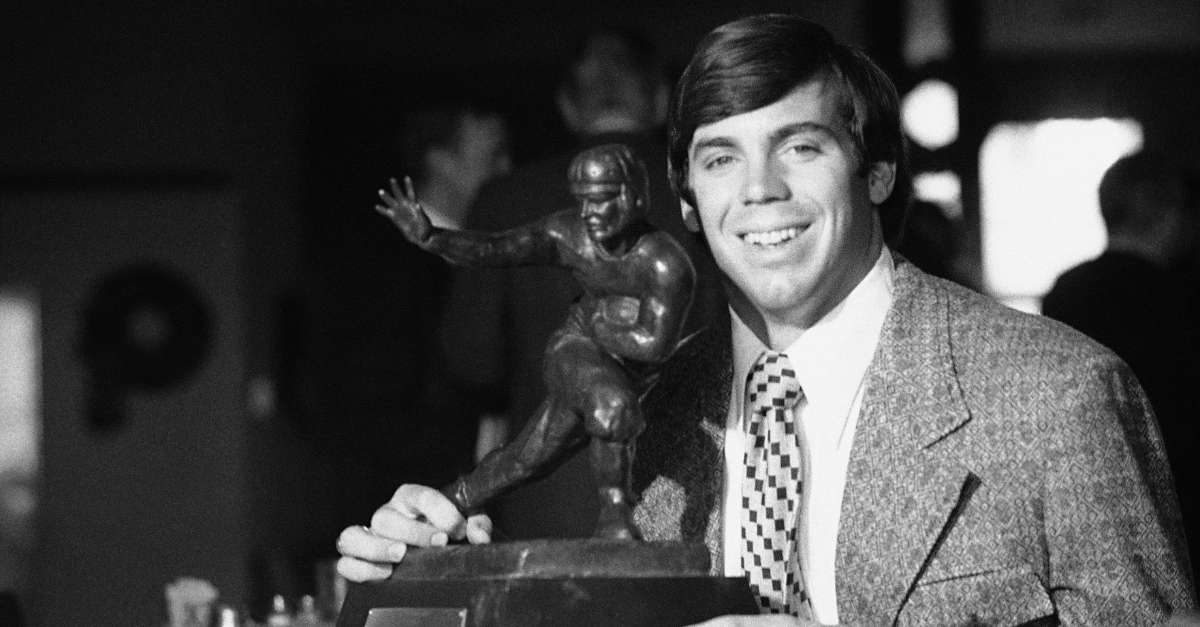 When you remember the historic players to suit up for the Auburn University football team, you may think of quarterback Cam Newton or running back Bo Jackson, but it is Pat Sullivan who paved the way and is truly the gold standard for the Tigers.

There’s no doubt the small quarterback left a huge mark on the Auburn Tigers’ program as the first player to win some of the biggest awards in the country while leading his team to a solid record.

To be the first at anything when you play at Auburn is impressive. However, Pat Sullivan did that a few times and left the school in better shape than when he got there. While he was at John Carroll Catholic High School as a three-sport star, the Tigers were struggling. In the three years prior to Sullivan being the starting quarterback, Auburn had a record of 17-14 with one bowl-game appearance and three losses to Alabama by a combined score of 62-19.

Sullivan had an immediate impact on the program, leading the team to an 8-3 record in 1969, including a 49-26 win over the Crimson Tide to end a five-game losing streak in the Iron Bowl.

It became obvious Sullivan was a special player during the 1970 college football season. He passed for 2,586 yards and 17 touchdowns while also rushing for 270 yards and nine touchdowns. The Tigers finished the season with a 9-2 record and beat Alabama, 33-28. It was the first time they had won consecutive Iron Bowl games since 1957-58.

His passing yards ranked fourth in the country while also having the fifth most touchdown passes in the NCAA. He was first in both categories in the SEC as well, earning him the SEC Player of the Year award and the Sammy Baugh Trophy.

With Sullivan once again putting up great numbers with 2,262 passing yards and 21 touchdowns, he won the Heisman Trophy and Walter Camp Player of the Year Award.

Though the season ended with tough losses to Alabama and Oklahoma, Sullivan proved he was, and always will be, the first great Tiger that all others should try to follow.

The Heisman Trophy winner was inducted into the College Football Hall of Fame in 1991 and had his No. 7 retired by the Auburn football program. He also has a statue in front of Jordan-Hare Stadium.

His great college career didn’t exactly translate to professional success in the NFL. Sullivan played for seven seasons after being selected in the second round of the 1972 NFL Draft by the Atlanta Falcons. He only played in 30 games during his career and left the league after spending the 1976 season with the Washington Redskins.

In 1986, Sullivan got his start in coaching at his alma mater as an assistant coach under head coach Pat Dye. He joined the Auburn Tigers’ staff as the quarterbacks coach and spent six seasons with the team before being hired as the head coach of the TCU Horned Frogs.

His head coaching career at TCU lasted six seasons before resigning due to the team not performing well. He was nearly hired to take over as the head coach of LSU, but the Tigers refused to buyout his TCU contract in 1994.

In 1999, he became the offensive coordinator at UAB and served in that role until 2006, even through a battle with throat cancer.

As a cancer survivor, he was named the head coach at Samford University in December 2007. In eight seasons with the Bulldogs, he led the team to a total record of 47-43.

He finished his career as a football coach with an overall record of 71-85-1.

This article was originally published August 13, 2019.

UPDATE: Sadly, Sullivan died on December 1, 2019 at the age of 69. The 1971 Heisman winner used his talent to inspire generations of Auburn fans and will always be remembered.