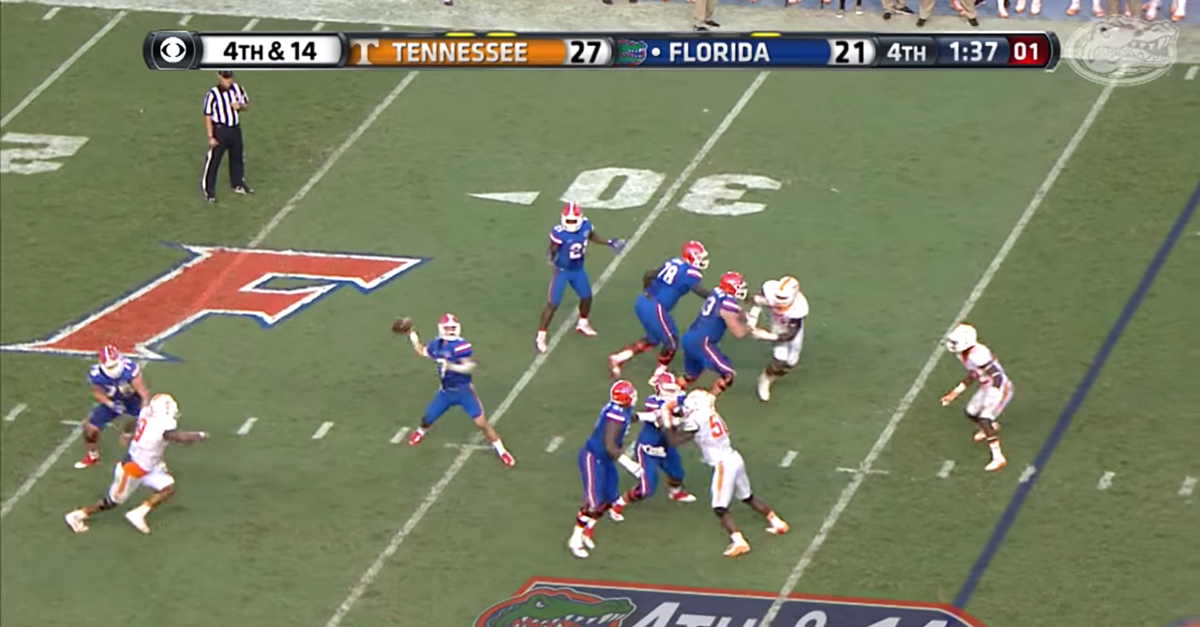 There is a simple lesson sports fan learns at a young age: never leave early during a close game.

It is safe to say more than a few Florida Gators fans learned that the hard way when the Tennessee Volunteers traveled to Gainesville back in 2015.

Coming off a tough road win over Kentucky, head coach Jim McElwain’s Gators hosted Butch Jones’ Vols for an SEC East matchup. Florida quarterback Will Grier went head-to-head with Tennessee QB Joshua Dobbs in what turned into an all-time classic between the rivals.

After running back Kelvin Taylor opened the scoring for UF, Tennessee ran off 20 unanswered points before Taylor punched in his second touchdown midway through the third quarter. The Vols, powered by a combination rushing attack of Dobbs and Jalen Hurd, put together a 16-play drive to take a 27-14 lead.

On the next possession, Grier threw the ball 15 times on a 17-play drive, punctuated by a fourth quarter touchdown pass to Brandon Powell with four minutes on the clock.

A huge three-and-out gave the Gators one more shot, but after three failed plays, Florida faced a fourth down with 14 yards to go and 1:39 left on the clock. The ball was in Grier’s hands, who found Antonio Callaway sitting in zone coverage for the first down.

The true freshman wasn’t intent on ending the play there.

Turning upfield and getting a great block from Powell, Callaway ? an All-American selection that year for his kickoff and punt return talent ? raced up the sideline and into the end zone for a 63-yard touchdown that turned Ben Hill Griffin Stadium completely upside down.

The Volunteers missed a potential go-ahead 55-yard field goal on their final possession, giving Florida a 28-27 victory and pushing their record to 4-0.

Jim McElwain’s squad entered college football’s AP Poll at No. 25 the following week and rolled No. 3 Ole Miss in The Swamp, 38-10. Florida went 10-1, beat LSU, Georgia and South Carolina on its way to the SEC East division crown, and was ranked inside the top-10 before a three-game losing streak to close the season ? Florida State won by 25 in the regular season finale, Alabama wasn’t fazed in the SEC Championship Game, and Michigan hung 41 points on the Gators in the Citrus Bowl.

While the 2015 season may have ended sourly, there’s no denying the iconic moment Grier-to-Callaway created for the Gators fans in attendance, as well as those who left the game early to get a head start on the postgame festivities.

And in case you forgot, Tennessee lost to Florida when they returned to Gainesville in 2017 on… a game-winning, 63-yard touchdown from Feleipe Franks to Tyree Cleveland.