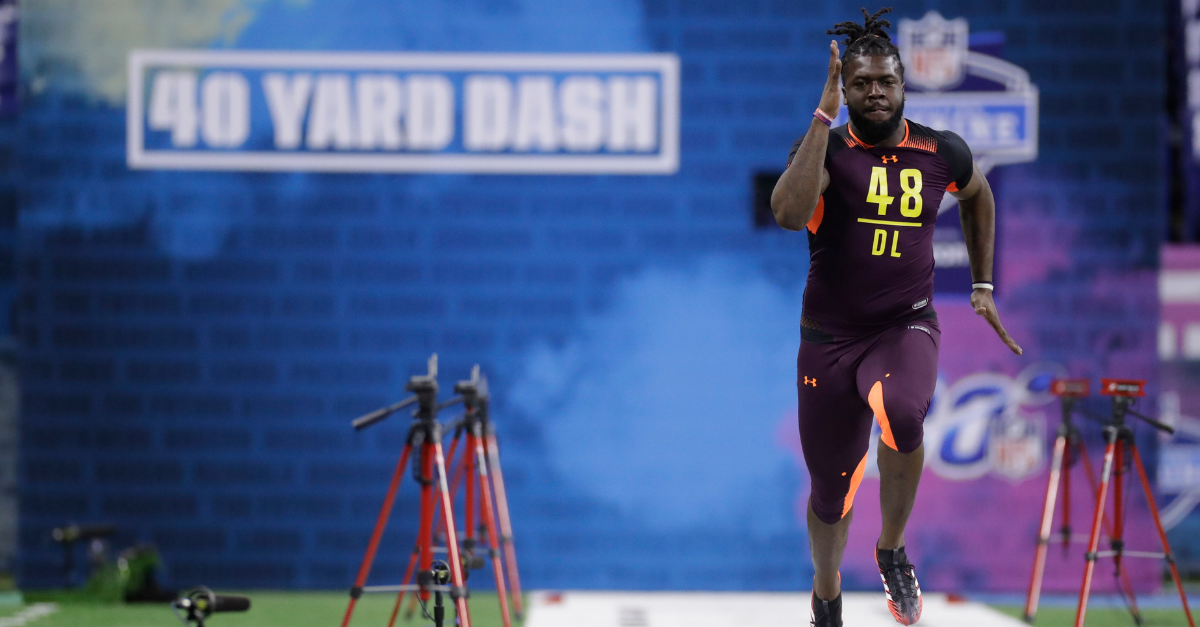 For most players, the NFL Draft is an event in which years of hard work pay off and dreams come true. For others, it’s a grueling experience that can involve sliding down draft boards like Laremy Tunsil following the infamous gas mask video or Vontaze Burfict for a failed drug test and an awful NFL Combine.

This year’s version of Burfict or Tunsil may have been Florida Gators defensive end/outside linebacker Jachai Polite, who the Jets took with their third-round pick. USA Today went so far as to say he might’ve had the worst NFL Combine performance of all time.

After showcasing his elite athleticism and quickness off the edge and posting one of the most productive seasons ever by a Gators DE last season — the edge rusher racked up 45 tackles (19.5 for loss), 11 sacks and six forced fumbles — Polite shot up virtually everyone’s draft boards.

This is how one scout described Florida DE/OLB Jachai Polite: "He doesn't have issues; he IS an issue." The talent is there, but can he buy into the program? Boom-or-bust pick by the #Jets.

The #Jets take #Florida pass-rusher Jachai Polite, who they believe is the 2nd best pass-rusher in the draft.

Related: Jachai Polite: 5 Crazy Clips That Prove the Florida DE is a Force of Nature

For this article’s purpose, let’s say Polite would’ve been selected at that 10th overall spot by the Steelers had it not been for a disastrous pre-draft process that included a poor combine, off-putting interviews in which he badmouthed multiple teams and a short-lived pro day at UF in which he looked way out of shape.

According to Forbes, 2019 10th overall pick Devin Bush is projected to sign a contract worth $18.9 million. Even the last pick of the first round, N’Keal Harry, is projected to earn at least $10 million.

Polite obviously fell out of first-round and second-round consideration and slipped all the way to the third round, where he was taken by the New York Jets with the 68th pick. We don’t know what Polite will sign for but we can use the 2018 draft to gauge it.

Last year’s 68th pick of the draft, Houston Texans safety Justin Reid, signed a four-year deal worth a little more than $4 million and included a signing bonus of just over $1 million.

Some quick math here reveals that Polite likely lost roughly a whopping $15 million in a matter of months.

While it’s unfortunate that Polite may not be able to do what his Twitter handle (@RetireMoms) suggests — at least maybe not yet — he doesn’t have anyone to blame but himself.

At 6-foot-2, the undersized Polite ran a slow 4.84 40-yard dash and blamed a hamstring injury during the NFL Combine. He didn’t perform much better at UF’s pro day and looked more like a left tackle than a defensive end.

It was abundantly clear that Polite didn’t take the time to prepare for every (or even just one) aspect of the NFL Draft process, both on and off the field. That’s ultimately nobody’s fault but his own.

Polite could end up being the steal of the draft and a monster pass rusher on an already scary Jets defensive line that will now feature No. 3 overall pick Quinnen Williams (Alabama), but he may have to wait a little longer before he can retire moms.