Tim Tebow produced so many iconic photos and videos during his time at the University of Florida. From the moment he stepped on campus in Gainesville and scored his first ever touchdown to his final game in the Sugar Bowl against Cincinnati to close the 2009 season, his four-year career is the definition of legendary.

Tebow was revered for his incredible speeches. He delivered "The Promise" speech after Florida lost to Ole Miss early in the 2008 season and didn't lose a game the rest of the year. At halftime during the national championship game against Oklahoma, he pumped up teammates like no else in the orange and blue could.

One lasting image that came from Tebow's Heisman Trophy-winning career is the quarterback saturated in red mud. You know the one. It looks like Tebow slayed a dragon with his bare hands on a football field and was still covered in its blood.

As a UF graduate, I have wondered many times about the story behind this photo. It turns out it comes from one play.

I already mentioned Tebow was a man on a mission during the 2008 season after losing to Ole Mis -- Florida won every game afterward by double digits. The dude was possessed and would absolutely not be denied a national title. Head coach Urban Meyer just had to let him off his leash.

The No. 2 Florida Gators took on the No. 23 Florida State Seminoles later that season in Tallahassee, Florida. Clouds that day decided to dump a ton of rain onto the field at Doak Campbell Stadium, creating a game that would become known as the "Soak at Doak."

UF won the game handily, 45-15, but there was plenty of controversy during it.

When Florida star wide receiver Percy Harvin suffered an ankle sprain in the second quarter, an injury that would affect his status in the SEC championship game and the BCS national championship game, Florida State fans applauded it. They were cheering for the fact that Harvin was hurt.

Tebow took that to heart and decided to let FSU have it two plays later.

The 245-pound quarterback dragged about three defenders into the end zone on a goal-line touchdown run, giving Florida a 20-6 lead in the second quarter. When Tebow emerged from the garnet end zone, his entire right side (including some of his face) was lathered in red paint. The play produced an image that gets passed around every year in late November. 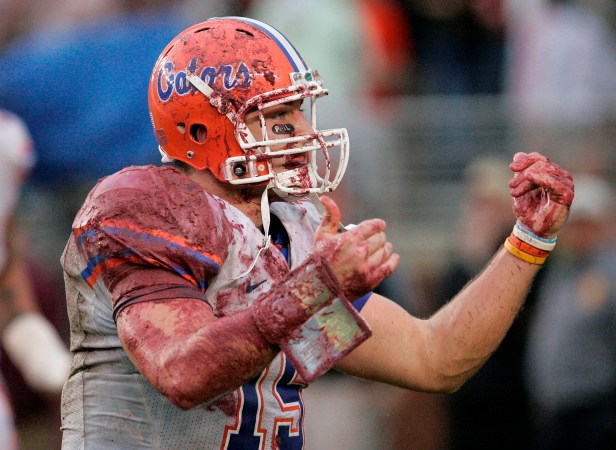 "The whole thing just fires me up every single time I think about it," SEC Network reporter and UF alumni Laura Rutledge recalled in a Facebook video. "Of course, it led to a national championship run. Go Gators!"

The UF defense picked off Florida State quarterbacks three times that day. Tebow threw three touchdown passes and rushed for that one. He also flat-out trucked a defender on one long run:

After taking down Bobby Bowden's squad, Tebow and the Gators defeated the top-ranked Alabama Crimson Tide in Atlanta. Oklahoma became the next and final victim to cap a memorable season that went down in the UF history books.

Tebow's college football career holds a special place in so many Gator fans' hearts. One of the best moments didn't take place in The Swamp, however. That "Soak at Doak" run perfectly defined No. 15's time in the orange and blue.