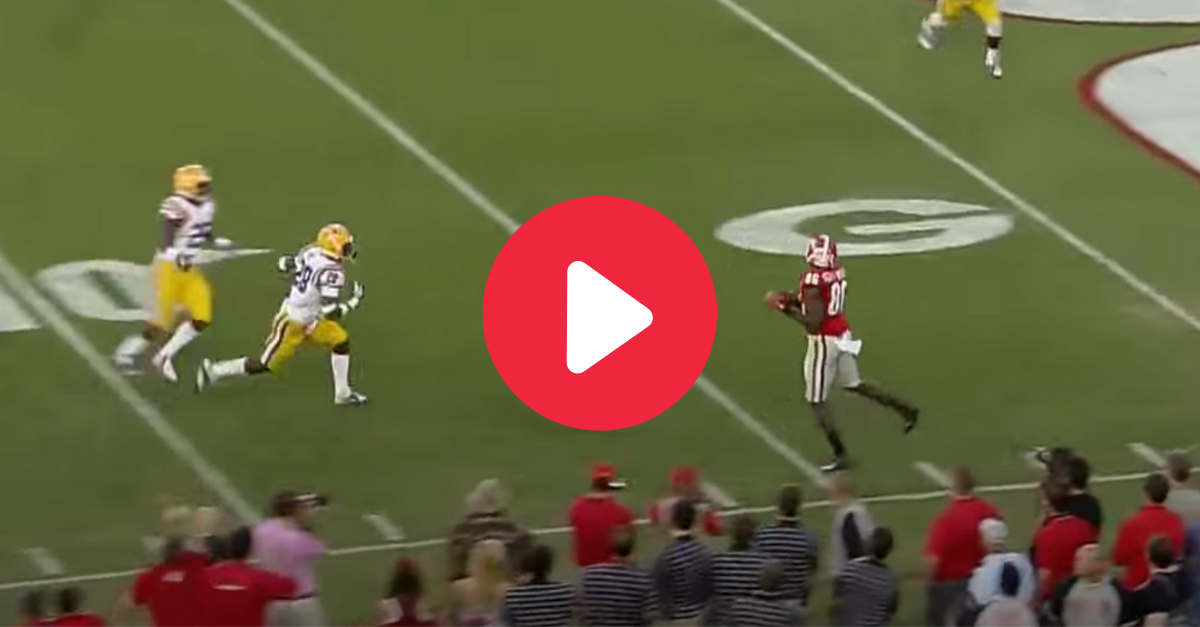 If you?re a Georgia Bulldogs fan, picking your favorite game ever is tough. The list of awesome moments inside Sanford Stadium alone makes it damn near impossible to choose. There is one night in Athens, however, that should rank high, no matter what.

On September 28, 2013, the Dawgs, under head coach Mark Richt, hosted the LSU Tigers. The hype for the game was unreal as it was a classic top-10 SEC showdown and former Georgia quarterback Zach Mettenberger was making his return to where he started his college football career.

Everything about the game was electric. There were future NFL stars all over the place. At the end of the night, though, it was senior quarterback Aaron Murray and wide receiver Justin Scott-Wesley who stole the show.

It was one of those Saturday nights that will be remembered forever. LSU?s Odell Beckham Jr. and Jarvis Landry exploded for 449 yards of total offense, but UGA got the last laugh.

After running back Jeremy Hill?s 8-yard touchdown run with just over four minutes remaining in the fourth quarter, Georgia needed Murray to deliver an epic drive, and he most certainly did.

First, Murray found wide receiver Justin Scott-Wesley for 11 yards and Arthur Lynch for another nine. Running back Keith Marshall picked up the first down before Lynch connected with Lynch again to move the chains. Freshman J.J. Green then jetted for 18 yards in LSU territory and set up a touchdown pass that will live in Georgia football history.

With under two minutes left, Murray took the shotgun snap, looked left and over the middle before firing a rocket to Scott-Wesley, who did a nice tiptoe act down the sideline and into the end zone for the game-winning touchdown.

There were so many great moments, but that 25-yarder will always stick out.

“We’ve played some hard teams,” Scott-Wesley said. “It just shows we’re a great team. We can handle anything anybody throws at us.?

The Georgia football team had been through the gauntlet to start the 2013 season. An opening loss to the ACC?s Clemson Tigers was quickly made up for with wins over the South Carolina Gamecocks and LSU. It also put the Bulldogs back into the SEC East title run and ?into the thick of the national championship race,? according to the Associated Press recap following the game.

Murray completing four-straight passes on the Dawgs? final drive of the second half, including the winning score, capped off a thrilling game that UGA fans will never forget.