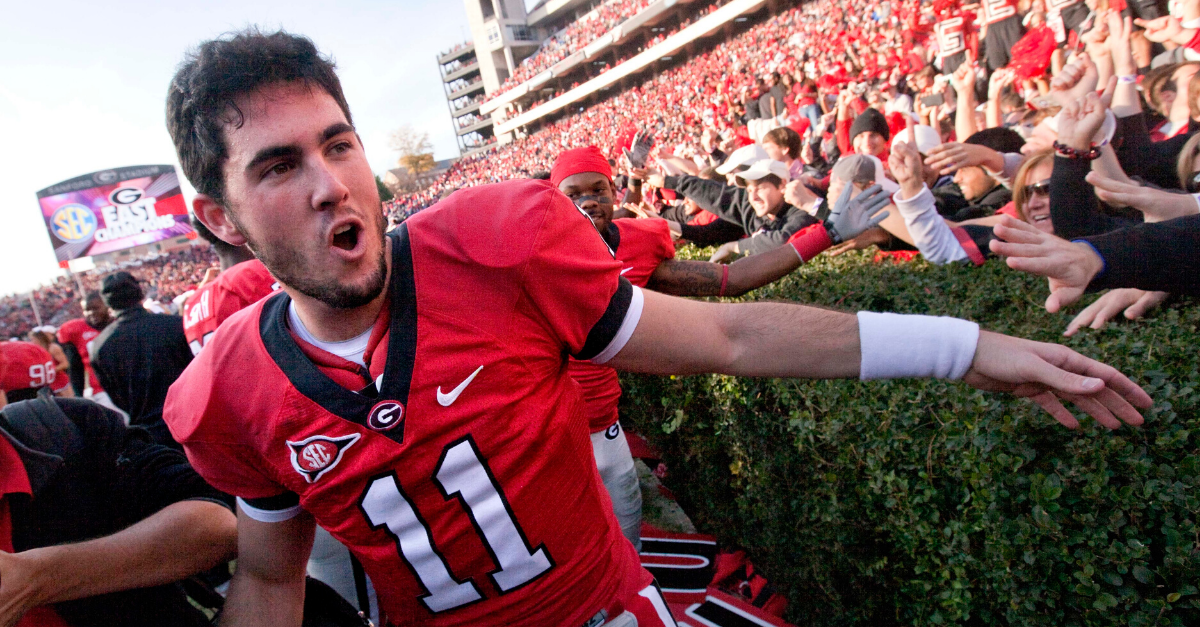 Raymond James Stadium is home to the NFL’s Tampa Bay Buccaneers and college football’s South Florida Bulls during the fall. The 65,000-seat palace has hosted two Super Bowls, as well as Super Bowl LV next February, the 2017 College Football Playoff National Championship, and will be the site of WrestleMania 36 this coming April.

A lot of cool things are happening in Tampa, Florida these days, but one of the most underrated is the launch of the Tampa Bay Vipers for the 2020 XFL season, and the return of one of the city’s homegrown heroes who happens to be one of college football’s forgotten icons.

Growing up in Tampa, Aaron Murray was a stud. After transferring from Jesuit High School to H.B. Plant High School, he blossomed into a five-star prospect and top-25 player nationally by every major recruiting service. As a junior, Murray exploded for a state-record 51 touchdown passes to go along with 4,012 passing yards, plus he added 932 rushing yards and 12 scores on the ground. Murray was rolling once again as a senior before suffering a broken left fibula and ligament damage mid-way through the year.

His recovery was expected to take six months, but that wasn’t good enough.

Murray returned after his team reached the state semifinal game. Sporting “obvious pain and discomfort” as Bleacher Report recalled, Murray led Plant High School to two-straight wins on one leg, the last being a 4-A State Championship Game victory in which he threw three touchdown passes to beat Lincoln.

“No one thought he (Murray) would be back. He worked as hard as he possibly could to put himself in that situation in the small hope that he might be able to come back. (Backup) Phillip Ely did his part, as did the rest of the team, and Aaron did the rest the last two weeks.”

The U.S. Army All-American with 53 scholarship offers was rated by 247Sports behind only other three quarterbacks nationally — Matt Barkley, Russell Shepard, and Garrett Gilbert. While all four eventually reached the NFL, none put up bigger numbers in college football than Murray did for the University of Georgia Bulldogs.

In his first season as a starter, Murray began his UGA career as a Freshman All-American who threw for over 3,000 yards in 13 games.

That wasn’t even close to his peak.

Over the next three seasons, Murray racked up more passing yards (13,554) and touchdown passes (137) than any quarterback in Southeastern Conference history. Not only do those SEC records still stand today, but Murray’s four seasons at Georgia are individually four of the best in school history. Murray’s 2012 season numbers ? 3,825 passing yds and 39 touchdowns ? rank No. 1 in school history. He put up the first-, fifth-, sixth-, and seventh-most passing yards in a season at Georgia, as well as the first-, second-, third, and sixth-most passing touchdowns in a season.

A model of consistency, Murray is one of only five quarterbacks in CFB history with four seasons of at least 3,000 passing yards.

What Happened to Aaron Murray?

#tbt to senior night vs Kentucky. A night I will always remember. Gotta love how @joshmurray11 is always ready for the cameras

As a senior, Murray was rolling before a season-ending torn ACL in Georgia’s 59-17 win against Kentucky late in November. The team won its rivalry game against Georgia Tech the following week, lost to Nebraska in the Gator Bowl, and Murray’s draft stock plummeted.

Amidst his rehab, Murray slipped to the 5th round of the 2014 NFL Draft, where he was selected 163rd overall by the Kansas City Chiefs. He was cut two years later, then bounced around to practice squads of the Arizona Cardinals, Philadelphia Eagles, and Los Angeles Rams before being waived in 2017.

The quarterback once thought of as “the next Drew Brees” has never taken an official NFL snap.

In 2018, Murray got another chance at professional football with the Alliance of American Football. The Atlanta Legends drafted him second overall, and Murray took over for an injured Matt Simms in Week 4. He rallied Atlanta to a 14-11 win against the Arizona Hotshots, completing 20-of-33 passes for 254 yards, then adding a team-high 54 rushing yards on seven carries. The next week, he threw for 306 yards in a win over Memphis. He finished the season with the highest completion percentage (64.8) of any AAF quarterback with at least 100 pass attempts.

Murray was rusty in the AAF, tossing seven interceptions with the Legends, but the color commentator for CBS Sports Network is back on the field with another spring football league in search of glory.

In the 2020 XFL Draft, Murray was designated a “Tier 1” quarterback and assigned to his hometown team, the Tampa Bay Vipers. Led by Head Coach and General Manager Marc Trestman ? the former head coach of the Chicago Bears and three-time Grey Cup Champion in the Canadian Football League ? the Vipers officially named Murray the team’s starting quarterback for Week 1 against the New York Guardians.

Tampa Bay’s first home game will be Saturday, February 22 against the Seattle Dragons.

The last time Murray attempted a pass in Tampa, Florida? It was January 2, 2012 when Georgia fell to Kirk Cousins Michigan State in the Outback Bowl. Before that? Murray was hobbling around Plant High School’s stadium in a victory that sent his high school football team to the state championship.

It’s been a long road and thousands of miles traveled for quarterback Aaron Murray. But the 29-year-old is back home, and the stars are aligned for the record-setting high school and college football player to prove his talent in the professional game.