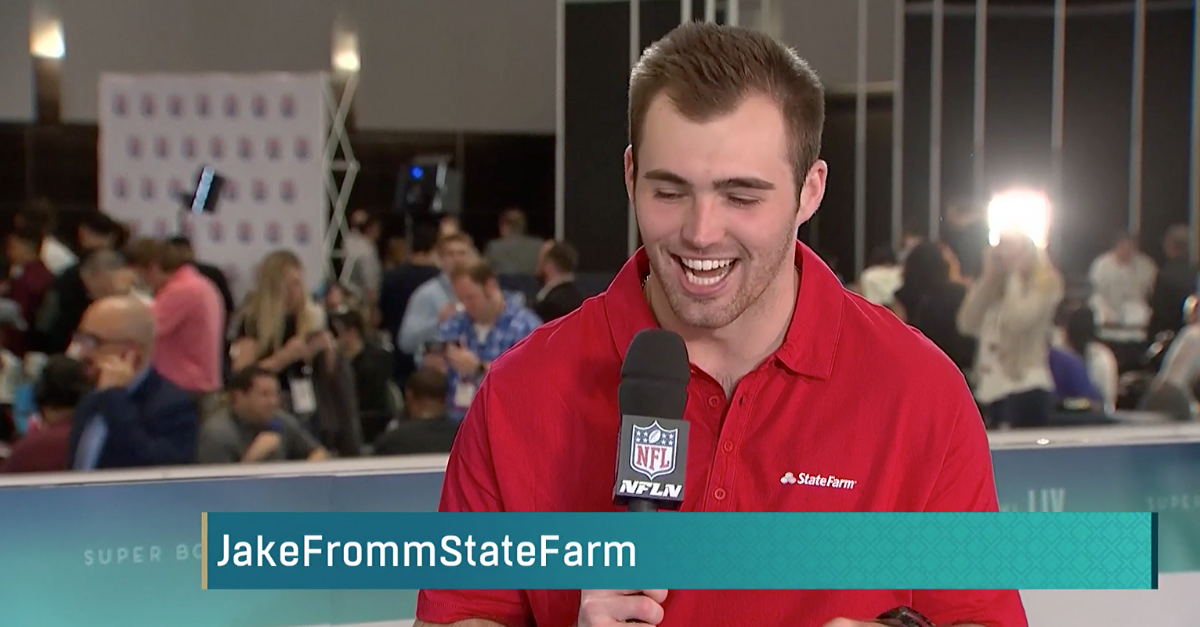 Some commercial and endorsement opportunities for professional athletes are just perfect. Nike’s iconic “Bo Knows” campaign highlighted two-sport athlete Bo Jackson’s ability to compete, literally, in any sport. All of Michael Jordan’s commercials stuck with us, because he’s quite simply the G.O.A.T.

But if we’re being honest, former Georgia quarterback Jake Fromm was born to be State Farm’s spokesman with a name perfectly suited for the company’s iconic advertising campaign.

From that point, State Farm’s commercial cemented the slogan in the mind of a high school kid from Warner Robins, Georgia named Jake Fromm.

Fromm made his Twitter name “JakefromStateFromm” and it stuck. He even tweets jokes linking himself to the company throughout his college football career, like this hilarious photograph from 2017.

When it's the fourth quarter but your clients are calling about their insurance #GoDawgs pic.twitter.com/kmskBBHg0Y

Leading up to the start of Fromm’s NFL career, the 2017 Freshman All-American, SEC legend, and UGA’s fourth-ranked passer all-time (8,224 career passing yards) is, finally, making his dream a reality.

During a recent appearance on NFL Network leading up to Super Bowl LIV in Miami, Fromm revealed that he’s officially a spokesman and endorser of State Farm.

“It kind of started off in high school when the whole ‘Jake from State Farm’ commercials were coming out. And my name being so similar, it was just easy. Made it my Twitter handle and kind of ran with it. Posted a picture in college, and who would’ve thought being a 16, 17-year-old kid that we’d be here now? But we are.

Former NFL All-Pro tackle Joe Thomas asked Fromm about what it’ll be like joining Aaron Rodgers and Patrick Mahomes, two NFL MVP quarterbacks who are both endorsed by the insurance company and have appeared in several State Farm commercials over the years.

“Those guys are incredible, incredible guys, and obviously incredible football players,” Fromm said. “So hopefully, I can fill at least half their shoes and have a good career.”

Fromm confirmed he would be throwing at the 2020 NFL Combine as he prepares for the upcoming NFL Draft. Competing for draft position with guys like Joe Burrow, Tua Tagovailoa, Justin Herbert and former UGA teammate Jacob Eason, Fromm finds himself in a mid-round draft position, as CBS Sports ranks him as their No. 6 quarterback prospect ahead of Jalen Hurts and Anthony Gordon.

One way for Fromm to improve his stock? Possibly make noise with his 40-yard dash time, which he predicted “we’re shooting for 4.8 [seconds].”

The University of Georgia Bulldogs and Kirby Smart will be replacing a legend in Athens, but Fromm won’t be going anywhere. I can’t wait to see his first State Farm commercial and can only hope he’s wearing a strong pair of khakis.