Mike “Big Dawg” Woods’ Legacy Lives On In His Son 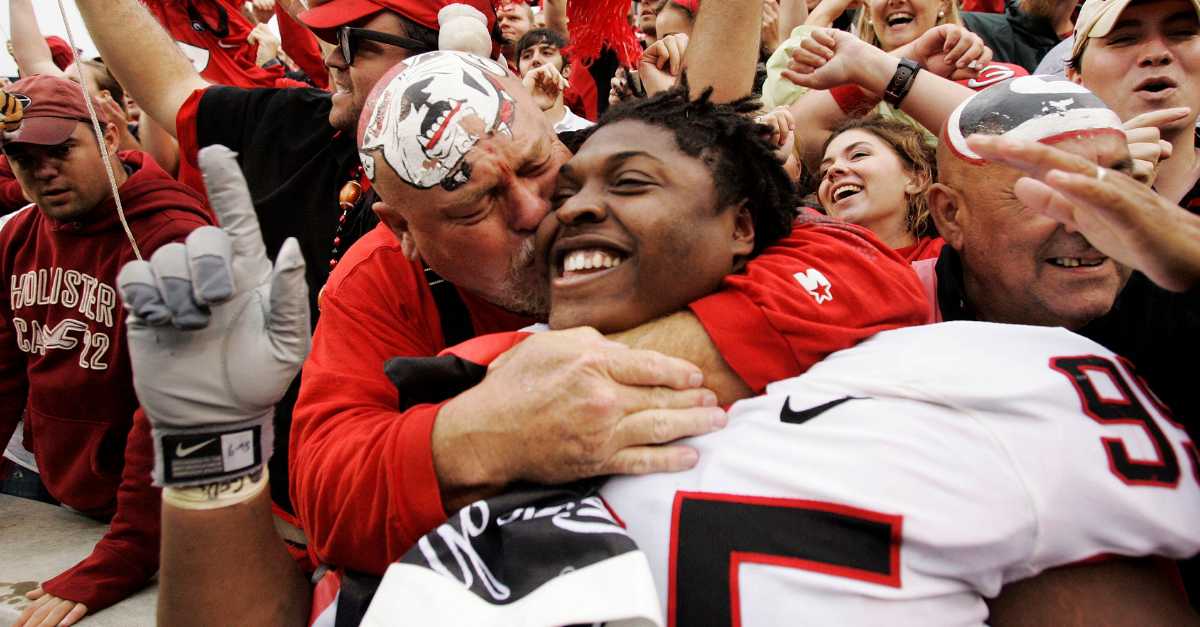 There are fans. There are die-hard fans. There are even superfans. And then there?s Mike ?Big Dawg? Woods, who bled black and red and embodied everything the University of Georgia stands for.

Sure, you?ve seen fans with horrible ugly tattoos of their favorite franchise. Everyone knows someone who?s cried or punch a TV when their team lost in the playoffs. Now let me explain to you why Mr. Woods, who unfortunately died of a heart issue in 2017, was such a memorable SEC and college football fan.

We have to start with what the Big Dawg is famous for: his head. Yes, every Saturday at Sanford Stadium, from 1990 until 2017, you could find Woods cheering on his Georgia football team in Athens, Georgia with a bulldog painted on top of his bald head. Mike’s wife, Dianne, was the artist. He held up a blow-dryer to speed up the process.

Mike "Big Dawg" Woods passed away today.
Please enjoy one of my favorite #UGA videos. You WILL need tissues. https://t.co/vUPtGb4b1B

Woods? father, Lonnie Woods, was the one who started the painting trend in 1980. He used to drive one of Georgia’s team buses and promised its players if they reached the Sugar Bowl that year (they did) he’d paint his whole head (he did). It was such a hit that he kept doing it. When Lonnie died in 1987, his son painted his head the same way for the first time in 1990 and carried on the tradition.

Of course, there was more to his image. Black overalls covered in all sorts of patches, a red undershirt and a cane with a Bulldog carved at the top of it completed his look. The cane was actually a gift from another fan.

Georgia fans loved it. They?d flock to Woods to pose with him for pictures. He was a hardcore UGA fan and he infected every fan who came across him. It was like a disease, but a good one. The black (and red) plague is what we?ll call it.

After Woods? death, a Twitter account shared pictures and videos of fans enjoying Georgia games with him. He was especially a crowd favorite at tailgates.

@MWoods_BigDawg RIP to the greatest Bulldog fan of all time! Sat n Athens will never b the same again! You will be missed! Prayers 4 the Fam pic.twitter.com/MihEOJIkx7

Rip to @MWoods_BigDawg. Such a great guy, glad my daughter got to meet him. #DGD pic.twitter.com/meGSHljOgD

Woods lived in Colbert, Georgia, a small town with a population of just under 500 people that sat 12 miles east of Athens and about 80 miles from Atlanta.

He was a retired salesman and enjoyed a quiet lifestyle until Fall game days rolled around. Life at home revolved around all things Georgia Bulldogs. He owned a white bulldog that resembled Georgia?s famous spiked-collar-wearing live mascot, Uga. He drove a small, red truck around his property that was decked out in UGA flags, stickers and other gear.

Although I don?t know for sure, he probably had a UGA man cave like this in his house.

Why Woods Was UGA’s Biggest Fan

Everyone knows all of that ? the look, the dog, the truck ? isn?t what makes a superfan. To truly be considered in the upper echelon of fan status, you have to religiously attend the games. That means the important rivalry games, too. You have to lose your voice by the third quarter. Your skin should be burnt to a crisp from sitting out in the sun for hours.

Woods told UGA student newspaper The Black and Red in 2013 that he missed just one Florida-Georgia game (also known as the ?World?s Largest Outdoor Cocktail Party?) in 43 years.

?It was 1987, I had back surgery done and they wouldn?t let me out. They knew one way or another I would have been down there.? – Mike ?Big Dawg? Woods.

He told ESPN in 2015 — the same year he had a heart attack — that he’d been a season ticket holder since 1970 and estimated he’d missed just one single home game since 1957.

Back issues and all, Woods was ready to cheer on his Dawgs from a stretcher if he had to. Hopefully he painted his head anyway.

Woods? legacy was so wide-reaching in the UGA football community that after he died, Georgia coaches mourned the loss on social media.

Kirby Smart, who took over the program in 2016, and former coach Mark Richt both offered their condolences.

Sad to hear the news of Mike "Big Dawg" Woods passing. Our thoughts and prayers go out to his family #RIP #DGD.

My prayers are with the family of Mike "Big Dawg" Woods. He was a good friend and a Damn good Dawg!!

Woods’ Son Carrying On The Tradition

Georgia football games won’t be the same without Mike, but the good news is that a third ?Big Dawg? is carrying on the Woods family tradition. Mike?s son, Trent Woods, took over in 2017. Here he is at the 2018 Rose Bowl representing bulldog nation.

How Bout Them Dawgs!!!!! pic.twitter.com/vWDGisQtW0

Mike Woods may be gone, but his legacy lives on. Rest In Peace, Big Dawg.