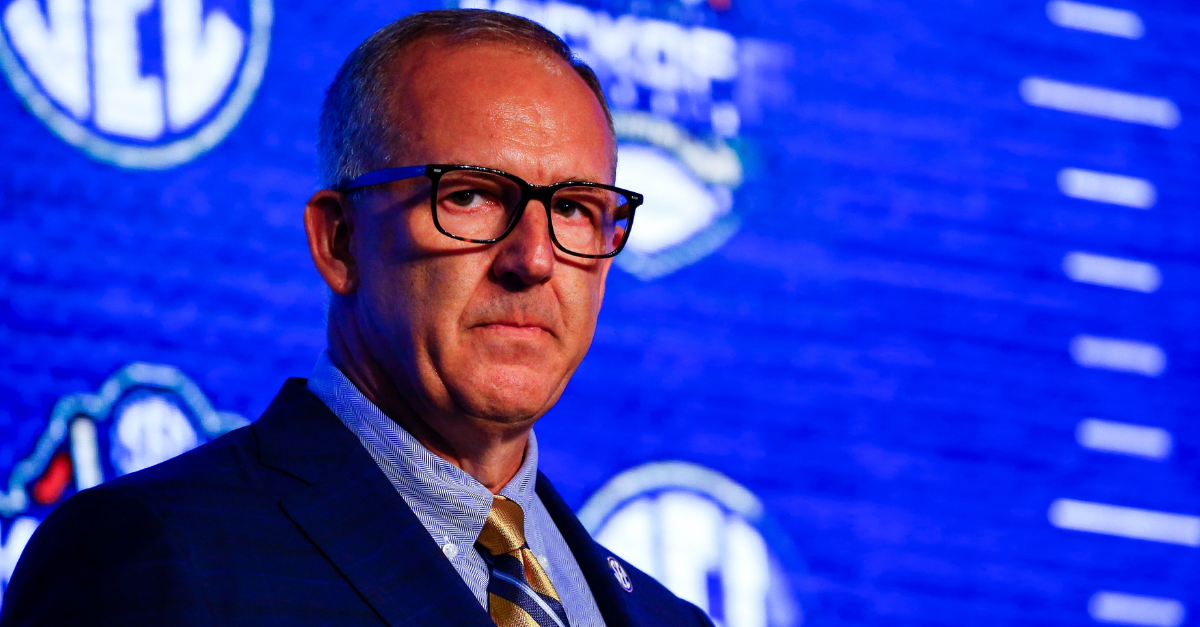 No matter if it’s at the high school, college football, or NFL levels, controversial calls happen all of time. To some fans, it’s very much as part of a game as touchdowns and interceptions these days. Nobody wants to lose a game with one, especially in the loaded SEC, but there are definitely times when a penalty flag by an official shifts momentum.

This was a big stop on third down, but Taylor was eventually flagged for a personal foul penalty and it kept Alabama’s drive alive in a game that wasn’t out of reach just yet.

Did this play change the outcome of the NCAA football game? No. Tennessee couldn’t get much going in the second half, whether this personal foul existed or not. However, it certainly stirred up some conversation on ESPN and social media.

Another incident happened in the South Carolina Gamecocks’ loss to the Florida Gators last weekend, too.

ESPN rules analyst Matt Austin: "The hand is in a strange place. He does have the jersey but what you look for with a hold is did he take a step away from defender. The defender looks like he’s satisfied to run side by side with runner down field. I’m glad there was no call." https://t.co/Fdn7S2Lw9r

All of this prompted the SEC Twitter account to release a long statement from Southeastern Conference Commissioner Greg Sankey on officiating.

Here is an excerpt from the press release on SECSports.com:

“In his book, Gridiron Genius, NFL executive, analyst and author Michael Lombardi offers this summary of football, “After is all said and done, football is really a game of surprises.”

“And yet, in this game of surprises, we ask for perfection.

“Perfection from our coaches and student-athletes, and perfection from the game officials who are called upon to instantly apply the rules in real time on every play.

“The Southeastern Conference is entrusted with supporting an officiating program that is responsible for calling the games of our member schools. We take this duty most seriously.

“We view perfection as our desired goal while also understanding it will always be an elusive standard in a game that is filled with surprises. And we are disappointed when we don’t get it right. Because our goal is to get it right, every time.

“While officials have always faced scrutiny, the effect has been intensified in recent years with the evolution of high-definition televisions and the ability to view super slow-motion replays from multiple angles on screens of all sizes and via replays shown on monster, crystal clear in-stadium video boards.

“The rules of football permit us to utilize modern technologies to review some, but not all, officiating calls. And while some calls are overturned, we know from our extensive review of all game films that our officials get the call right in the vast, vast majority of situations. SEC Football Officials are dedicated to their work and approach each game with integrity and focus on fairly administering the competition.

“But mistakes occur, and when errors happen, the next questions are,
What happens now? Where is the accountability?’

“SEC officials are held accountable for the overall body of their work and the work of their officiating crew, which is reviewed on a weekly basis throughout the season and on an annual basis.

“Ongoing performance evaluations are used to determine game assignments, postseason assignments, compensation levels and ultimately, whether an official is invited to return for the following season. You can learn more here.

“In addition, during the season, officials’ assignments may be altered based on in-season performance. By protocol, the SEC does not publicly announce these assignment changes.

“SEC Bylaws require that coaches and administrators refrain from public criticism of officials, as well as making public comments about any specific communications with the Conference office related to officiating. This is a bylaw that was enacted by unanimous vote of the SEC’s member institutions and it is the responsibility of the Conference office to enforce this bylaw by use of private or public reprimands, fines or suspensions.

“Although the Conference office does not publicly communicate about personnel actions and school personnel are restricted in their comments about officiating, we did decide in the offseason to be more intentional in communicating other matters about the officiating process to all of our audiences”

Athletic directors, head coaches on the sideline, and all college sports fans understand referees aren’t perfect, sure, but we all should expect something close to it on game days. From bowl games to conference titles, there’s so much at stake each and every week.

Is SEC officiating perfect? Absolutely not. We all have to realize that and understand Sankey isn’t going to apologize for the past. It’s now to the point where we should probably read that book to even know what he’s talking about.

READ MORE: Joe Burrow’s Naked Ass Popped Out, And The Jokes Were Endless