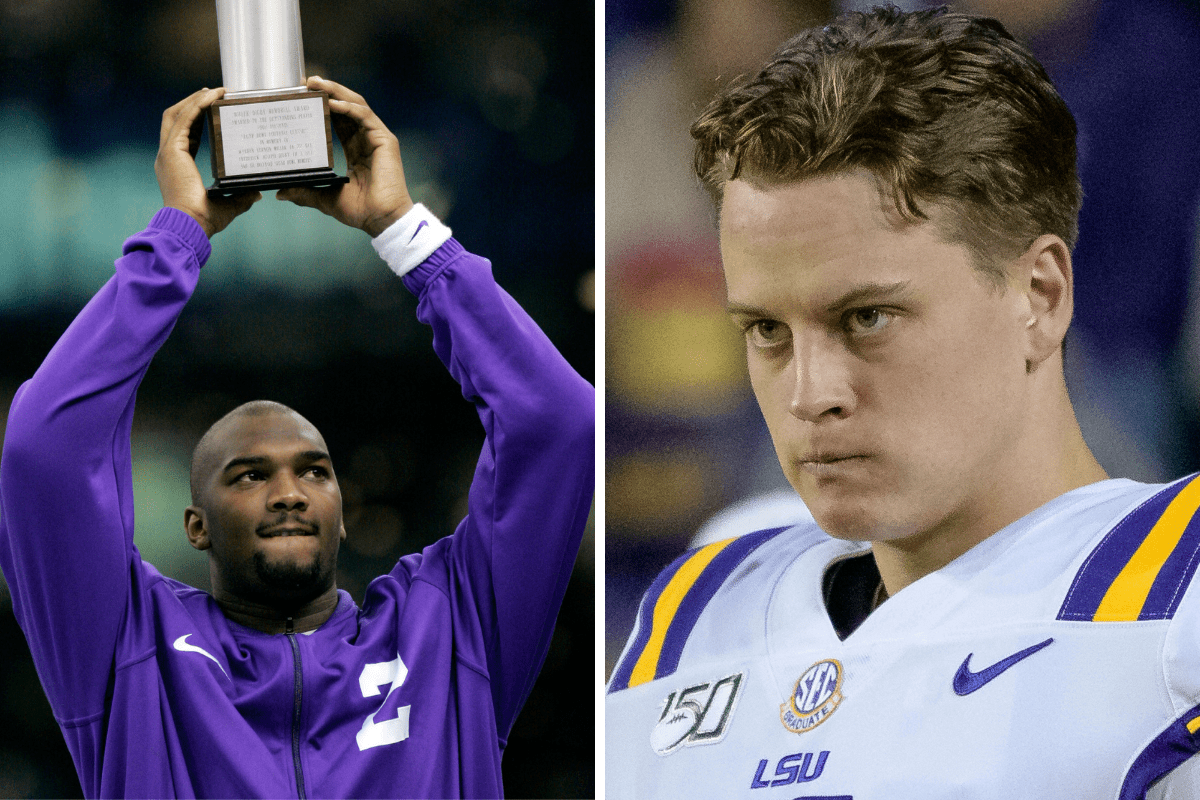 When it comes to college football down in Louisiana, all eyes turn to Baton Rouge. With all due respect to the Ragin’ Cajuns, the Green Wave and whatever Louisiana-Monroe are calling themselves these days (we want to say the Turquoise Tornadoes but that can’t be right), football in Louisiana is all about LSU. The Tigers are one of the jewels of the SEC keeping pace with schools like Florida and Alabama in college football’s toughest conference.

The LSU Tigers have four national championships to their school’s name, the most recent of which came under head coach Ed Orgeron in 2019. LSU history is filled with iconic names and future NFL stars, but the Bayou Bengals are often thought of as not having maybe the best quarterback history.

Perhaps this look at the top 10 LSU quarterbacks of all time might change your tune on that front. Maybe LSU isn’t Alabama when it comes to quarterbacks, but other SEC schools likes Arkansas, Ole Miss or Auburn would probably like a quarterback list like this.

In the history of LSU football, who are the 10 best quarterbacks? And will Myles Brennan or Max Johnson possibly point this list soon? We like Johnson’s chances a little better, but for now here are the best players to ever line up under center in the purple and gold.

Mettenberger was originally a Georgia quarterback, but before playing a game he was kicked off the team for violations and also got himself involved in some pretty heinous legal hot water. This led to a stop at a JUCO school where his success led to a chance to join the Tigers. Mettenberger wouldn’t become the starting quarterback until his second season with the team but spent two years as the starter, including throwing for 3,082 yards, 22 touchdowns and eight interceptions in 2013. He was then a sixth-round pick in the NFL Draft and started 10 NFL games for the Tennessee Titans.

Tyler took over as a freshman in 1995 and proceeded to start 31 games for the Tigers before he graduated. The quarterback got it done as a passer and rusher, throwing for 40 touchdowns and rushing for 23 more in his career. Tyler’s highlight came in 1997 when he helped LSU upset top-ranked Florida 28-21.

Maty Mauk in at QB for #mizzou Not to be mistaken with former #lsu QB Matt Mauck pic.twitter.com/grZnV5PFiJ

No, he isn’t related to former Missouri quarterback Maty Mauk. LSU’s Mauck was a little older, as he had spent a few years playing minor league baseball. He only got to spend a single season as the full-time starter, but what a season that was. Mauck was the starter for the 2003 team that beat the Oklahoma Sooners to win the national title, Nick Saban’s first. Not his last, of course.

LSU quarterbacks don’t always have the most-robust career numbers, because the Tigers stuck with a ground-and-pound, win-with-defense ethos for longer than many teams. He also didn’t get the starting job full-time until 2007, when he was a fifth-year senior. That season culminated with him throwing for four touchdowns against Ohio State in the BCS Championship Game. Flynn won the MVP for the game, and LSU got another title. Flynn went on to spend nine seasons in the NFL, mostly as a back up in Green Bay.

Davey is another quarterback that didn’t become a full-time starter until his senior season. He spent a lot of his career sharing time with Josh Booty, but you won’t find Booty on this list. Davey is here, though, because in 2001 he threw for 3,347 passing yards, making him the first LSU quarterback to throw for over 3,000 yards. In the Sugar Bowl to end the season he tossed for a staggering 444 yards and three touchdowns against Illinois. By the way, Davey is a two-time Super Bowl winner. Sure, it was backing up Tom Brady on the Patriots, but it still counts!

Y.A. Tittle is an old-school name. He was the sixth pick in the NFL Draft way back in 1948. He would become a Hall of Famer as a pro, but at LSU he was first-team All-SEC twice. Tittle has definitely had the best pro career on this list as of right now, but this isn’t a list about the NFL.

?How do you know this isn’t about ranking NFL careers? Because Jamarcus Russell, one of the biggest busts of all-time, is ahead of Tittle. And yet if you watched Russell at LSU you know why the Raiders were enticed to take him first overall. His arm was powerful. His throwing motion was smooth. In his final season, he completed 67.8 percent of his passes for 3,129 yards, 28 touchdowns and eight interceptions and was dominant in the Sugar Bowl against Notre Dame. His NFL career was a disaster, but Russell was so good at LSU.

Hodson went to high school in Louisiana and then jumped to LSU and immediately became the starter. in fact, Hodson was first-team All-SEC all four seasons of his college career and finished with the program record for career passing yards (9,115). He also became the third quarterback in NCAA history to post four seasons of over 2,000 yards passing. Hey, in the ’80s that was a big deal!

Jones is the first All-American on this list, and he was also oh-so-close to being the first-overall pick in the NFL Draft. Instead, he had to settle for being the second-overall pick. While Jones’ name isn’t bandied about in the NFL much these days, he actually won the MVP in 1976. His time at LSU also got him inducted into the College Football Hall of Fame. For many years, he was the best quarterback in LSU history.

Then, Joe Burrow showed up. Burrow was famously buried down the depth chart at Ohio State before he transferred to LSU. In his first season as a starter he was solid, throwing for 2,895 yards and 16 touchdowns while also rushing for 399 yards and seven touchdowns.

Prior to the 2019 season, Joe Brady showed up to modernize the LSU offense and Burrow exploded. He threw for a stunning 5,671 yards and an NCAA-record 60 touchdowns. With perhaps the greatest season a college quarterback has ever had, Burrow won the Heisman. He also dominated in the playoffs to carry LSU to the national title. The Cincinnati Bengals made Burrow the first-overall pick in the 2020 NFL Draft. We don’t know what kind of pro career Burrow will have. We do know he’s the best LSU quarterback ever.