LSU’s Fake Punt Brought the House Down, And a Dumb Penalty Spoiled It 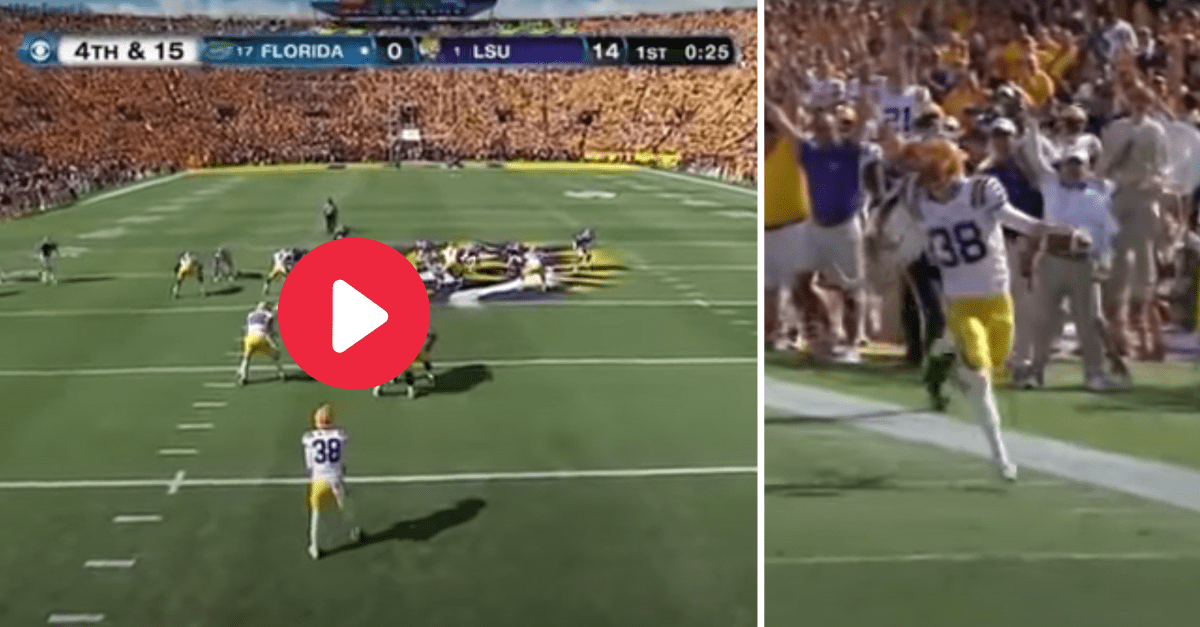 Former LSU Tigers head coach Les Miles loves a good trick play, especially on special teams. He partly earned ?The Mad Hatter? nickname for that very reason. Not everyone has that same risk-it-all mentality, but his players certainly bought into it, too.

Back in October 2011, top-ranked LSU hosted the Florida Gators for a classic SEC showdown at Tiger Stadium. It really wasn?t much of a game, though. The Tigers took care of business in Baton Rouge and proved they were the best college football team in the country.

There were so many great plays on CBS that day, but one truly stands above the rest.

Leading 14-0 late in the first quarter, LSU punter Brad Wing got the call to kick it away and hopefully pin Florida deep inside their own territory. It was business as usual. However, when the Gators all dropped back into coverage, the Australian took matters into his own hands.

Instead of punting, Wing took off running. He got past the first down marker, sprinted down the sideline, and found himself in the end zone for a touchdown.

It was beautiful and completely brought the house down in Louisiana. Then, unfortunately, the touchdown was called back.

Just before he went into the end zone, Wing stretched out his arms while staring right at some Florida players. He received a ridiculous penalty for taunting. LSU ended up having to settle for a field goal.

Miles said Wing made the right call going for the fake. It?s just sad the penalty (thanks a lot, NCAA Rule Book) made it a 44-yard run and not a 52-yard touchdown run.

“In a big game when 4 points is important, we won’t do that,” Miles said.

As for Wing, the Second-Team All-SEC selection played in the NFL for the Philadelphia Eagles, Pittsburgh Steelers, and New York Giants. Nothing, however, could ever top that fake punt.

Even watching it today during the coronavirus pandemic and COVID-19 outbreak is fun.