One of the most memorable things about athletes in sports are the numbers they wore. Michael Jordan is obviously No. 23, Wayne Gretzky is No. 99, and Tom Brady is No. 12, but LSU football has one of the most storied numbers in a single team's history in all of sports.

In 2003, LSU was led to a National Championship by the first number No. 18, and ever since, the number has been passed down to football players who exemplify everything LSU Tigers. Who was the first though and how has it been passed down since then?

In 2002, quarterback Matt Mauck injured his foot and ended his sophomore season. The next year, he bounced back to lead the LSU Tigers to their second national championship, which was the program's first since 1958. During his junior season, he completed 64 percent of his passes for 2,825 yards, 28 touchdowns, and 14 interceptions, but it isn't just what he did statistically that started the tradition.

His strength and hard work while returning from injury is what the Tigers would look for in the team's number 18 for over a decade.

After winning the BCS National Championship game, Mauck decided to turn pro and was taken in the seventh round by the Denver Broncos. One of his last gifts to LSU was passing on the number he wore for three years to an incoming freshman who he thought was the perfect match.

Hester is the only player since the tradition began to wear the number 18 for four seasons, and no player gave a better example of what to look for in the number. His biggest moment came in 2007 as the seventh-ranked Florida Gators visited Tiger Stadium to face a top-ranked LSU football team. As a senior, Hester rushed for 106 yards and a touchdown on 23 attempts, including the game-winning score with 69 seconds left.

His second-highest rushing total came in the SEC Championship Game against the Tennessee Volunteers with 120 yards on 23 carries. Then, he followed that up with 86 yards and a touchdown in the BCS National Championship against the Ohio State Buckeyes to win the program's third NCAA title and second in five seasons.

During his final season in Baton Rouge, Hester rushed for 1,103 yards and 12 touchdowns, by far his most productive season on the ground. For his career, he ran for 1,780 yards and 20 touchdowns and also caught 62 passes for 459 receiving yards and four more touchdowns.

When Hester left the Tigers' football team, he was part of a group, including Mauck, tasked with choosing the next No. 18. They chose a player who was a huge role in that 2008 national championship game.

After catching four passes for 42 yards and two touchdowns in the 2008 title game, Dickson was picked to be the next No. 18, and the decision approved by head coach Les Miles. He finished his career with a then-school-record 90 catches by a tight end, with 52 of those receptions coming in his final two seasons while wearing the iconic jersey.

After Dickson, there were five consecutive seasons where a new player wore the 18 jersey for the season opener.

Murphy is the perfect example of how the No. 18 isn't just awarded to a player who is one of the most talented or highest producers -- Murphy fought back from an injury just like Mauck did several years earlier. After suffering a knee injury two games into the 2009 season, Murphy returned and was asked to wear the number in his final season.

Taylor is another player who showed the mental strength needed after fighting through injuries. After starting for most of the 2010 season at safety, Taylor suffered the exact same foot injury that Mauck had during his sophomore year. Taylor's season wearing 18 was definitely his best, finishing with 71 total tackles, 7.5 tackles for loss, one sack, two interceptions, and five passes defended.

Definitely the biggest player to wear the numberr 18 this century, Bennie Logan took on the number for the 2012 season and was a part of a great LSU defense that allowed only 17.5 points per game. In his third and final season in Baton Rouge, Logan recorded 45 tackles, 5.5 of those for a loss, two sacks, and a forced fumble.

Barrow led a talented defense in 2013 despite the offense continuing to struggle. He did, however, lead the team with 91 total tackles, and also had 5.5 tackles for loss, 1.5 sacks, two pass breakups, one fumble recovery.

During the 2014 season as the backup running back for the second-consecutive year -- this time behind Leonard Fournette -- Terrence Magee gave the Tigers some good carries while wearing 18. On 112 carries, Magee rushed for 571 yards and three touchdowns while catching 17 passes for 171 yards and arguably the most important player to the offense.

After his first two seasons with 88 total tackles, 5.5 tackles for loss, one sack, four interceptions, a forced fumble, and averaging 10.9 yards per punt return, Tre'Davious White was chosen to wear the historic number and became the first player since Richard Dickson to wear No. 18 for more than one season. In those two years, he had 79 tackles, 5.5 tackles for loss, 21 pass breakups, two interceptions, one fumble recovery and 44 punt returns for 415 yards, and two touchdowns.

He has been the highest picked LSU football player to wear the number, going 27th overall to the Buffalo Bills in the 2017 NFL Draft.

For the first time, LSU chose two players to wear the number, one on each side of the ball. LaCouture, in his fourth season, was the second defensive lineman to receive the honor after Logan did in 2012. He finished the season with 66 tackles, 8.5 tackles for loss, six sacks, five pass breakups. His total tackles was second on the team, as well as his sack total, and he finished third in tackles for loss.

Moore, a senior fullback/tight end, didn't contribute much statistically with nine touches for 70 yards and two touchdowns, but you know with the number 18 on his jersey, he was more importantly a leader for the offense.

After a solid junior season, Moreau changed his number to 18 for his last season and was the second-straight tight end, and third overall, to receive the honor. Moreau tied for fourth on the team with 22 receptions and was sixth on the team in receiving yards while also tying for third on the team with two receiving touchdowns.

Moreau was drafted in the fourth round of the 2019 NFL Draft by the Oakland Raiders and passed on the tradition to the next No. 18 down in Baton Rouge. 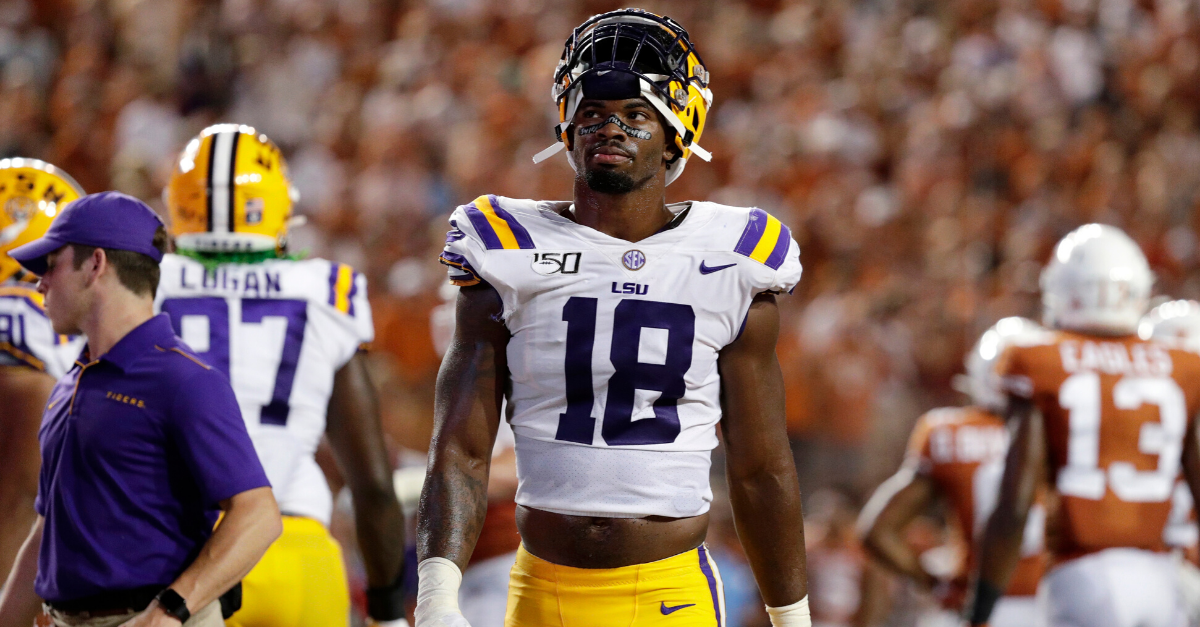 During LSU's College Football Playoff National Championship run, two players were selected to wear No. 18 once again, and both had good reasons.

Cushenberry was a returning starter at center and the heart of LSU's dominant group up front. Because NCAA rules prevent offensive lineman from wearing numbers outside the 50-79 range, Cushenberry continued to wear his No. 79 jersey with a No. 18 patch on it. He was named Second-Team All-American protecting Heisman Trophy winner Joe Burrow.

Chaisson, who missed the entire 2018 season with a knee injury, returned to become one of the league's best pass rushers wearing the iconic jersey. He earned All-SEC honors racking up 60 tackles, 13.5 tackles for loss and 6.5 sacks, as well as being named Defensive MVP of the CFP Semifinal versus Oklahoma.

This article was originally published May 15, 2019. It was updated following the 2019 season.