Alabama head coach Nick Saban is known by many names across the college football world. Coach, the Sabanator, Darth Vader and GOAT are a few. In his hometown of Monongah, West Virginia, Saban is referred to as "Brother."

The origins of the nickname can be traced back to a story a lot of kids are familiar with: a Pop Warner football team coached by his dad. When Saban was 11, his father, Nick Saban Sr., started the team with his friend Willie Criado.

The elder Saban bought and fixed up a school bus to drive the team to practice and games. He was the mechanic, equipment manager, travel agent, chef, head coach and driver. His co-pilot was none other than his son Nick.

The team went on to win two Pop Warner state titles and "Brother" later quarterbacked Monongah High School to the 1968 state championship. He then played defensive back at Kent State University and earned a degree in business.

As the 22-year-old Saban was getting his start in coaching as a graduate assistant at his alma mater, his father tragically passed away from a heart attack. He was 46. Nearly 50 years later, the Alabama coach still keeps his legacy alive. 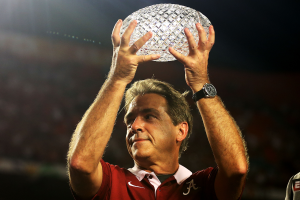 Saban isn't the kind of team leader who needs a reason to be great. After a trophy room filled to the brim with every single college football accolade you could imagine, it begins to seem like Saban just exudes excellence. However, the passing of his father is one of the driving forces for that hunger for success. And in recent years, he's become more open about what his father has meant to him and how he inspires Alabama's head coach every single day.

"Not a day goes by that I don't miss and think about my dad. His passing at forty-six years of age seemed unreal and was devastating to our family; yet, he is always with me in spirit, in my heart, and in my mind. We had a unique relationship because he was my dad, my boss, and my coach. I loved him very much and want everyone to know that I wouldn't be the person I am nor have had the success I've enjoyed without the experience of dad in my life; he was my champion! He set a standard of excellence and provided a set of values and direction for my life that I still follow today," Saban wrote here.

It's natural to assume Saban keeping his father's legacy alive means winning on the field. After all, Nick Sr. took his son's Pop Warner team from zero victories in year one to multiple championships and a 36-game winning streak by the time the boys reached high school.

However, Saban keeps his father's legacy alive by his work off the field.

Monongah was a small mining town where strikes were frequent, and basic resources were hard to come by due to the lack of work. Nick Sr., who owned a gas station in town, would buy random items far above what they were worth from community members to help them stay afloat. He eventually accumulated enough stuff to fill five garages. Hardly anyone knew because, according to Nick Jr., he didn't want the attention.

Nick Sr.'s mantra can be boiled down to "Do the right thing. Help your neighbor."

The Alabama football coach has done just that. He stays in touch with his dad's old friends. He helped send a friend to college after he served a short prison sentence. He helped with medical bills for a West Virginia child who was battling brain cancer. He helped a farmer bale hay when he was a teenager simply because it's what you do. It's evident Saban's West Virginia roots mean a lot to him, even after all these years.

?Treat people kindly on the way up because you might need them on the way down.?
-Nick Saban Sr.

He brought that mantra to Tuscaloosa, too. He helped build 17 houses for victims of the 2011 tornado that ravished the town. He sought out Arkansas center Frank Ragnow after the annual SEC West matchup in 2016 to offer his condolences after Ragnow's father passed away from a heart attack the week before the game. His charity, Nick's Kids, which he started when he was at Michigan State, is dedicated to supporting children, family, teacher and student causes.

"For my dad, it was always what kind of person are you? What kind of compassion do you have for others?" Saban told Bleacher Report in 2017.

"Every son wants to fulfill his dad's hopes and dreams," Saban continued. "I hope I have."

Saban may have a reputation as an insatiable perfectionist who wins national championships, but he would be the first to drop everything and help someone in need.

You wouldn't know it, though. He doesn't want the attention.